Belgian prosecutors have charged a man with terrorist offences, in connection with the deadly attacks in Brussels that left 31 dead.

They named him as Faycal C, who was arrested on Thursday. 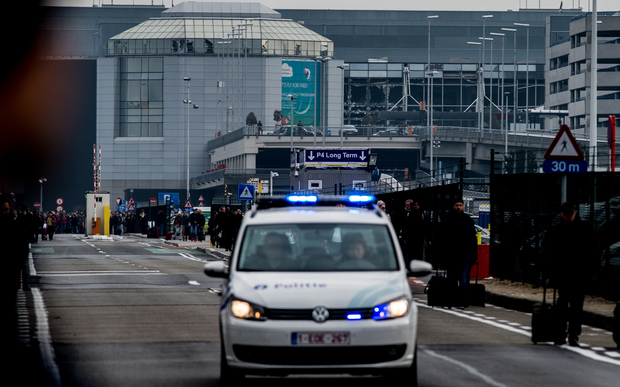 A Belgian police vehicle driving past passengers who are evacuating the Brussels Airport in Zaventem. Photo: AFP

Suicide bombings, claimed by so-called Islamic State (IS), killed 11 people at Brussels Airport in Zaventem on 22 March. Twenty others died in an attack on the metro.

Zaventem, which is Brussels international airport, will not reopen before Tuesday, authorities have announced.

Meanwhile a demonstration against the attacks, planned for Sunday in central Brussels, has been cancelled after a request from the authorities.

Belgian prosecutors said that Faycal C had been detained outside the prosecutor's office in Brussels on Thursday. A search of his home had found no weapons.

It gave no further details and made no comment on Belgian media reports that he was the third man in an airport CCTV image that showed the two suicide bombers - Najim Laachraoui on the left, and Brahim el-Bakraoui. Belgian media say the third man is Faycal Cheffou, a freelance journalist.

The third man, wearing a hat and pale jacket, also had luggage packed with explosives. However he was said to have fled without detonating his device. It was detonated in a controlled explosion once the departures hall was cleared.

Faycal C was among 12 people arrested on Thursday and Friday in police raids in Belgium, France and Germany.

Four days before the Brussels attacks, the key suspect in the 13 November Paris attacks which killed 130 people, Salah Abdeslam, was detained in a raid in Brussels. Police said he was initially co-operative.

But Belgian Justice Minister Koen Geens later confirmed in parliament that Abdeslam "no longer wants to talk since [Tuesday's] attacks" in Brussels.

Other arrests confirmed by prosecutors include:

Separately, Brussels airport authorities said the "investigative work related to the judicial inquiry into the airport terminal has been completed" but that passenger activity could not resume before Tuesday.

Airport engineers and technicians are getting access to the terminal for the first time since the attack.

They will assess the damage and stability of the building. The airport authorities will also put new security measures in place.

In his weekly address on Saturday, US President Barack Obama paid his respects to the victims and said attempts to stigmatise Muslim-Americans should be rejected.

In a separate development, Belgian prosecutors denied the murder of a security official at the Fleurus nuclear research centre was a terrorist act, the Belga news agency reported.