Hundreds of thousands of people took to the streets in student-led protests calling for tighter gun control across the United States. 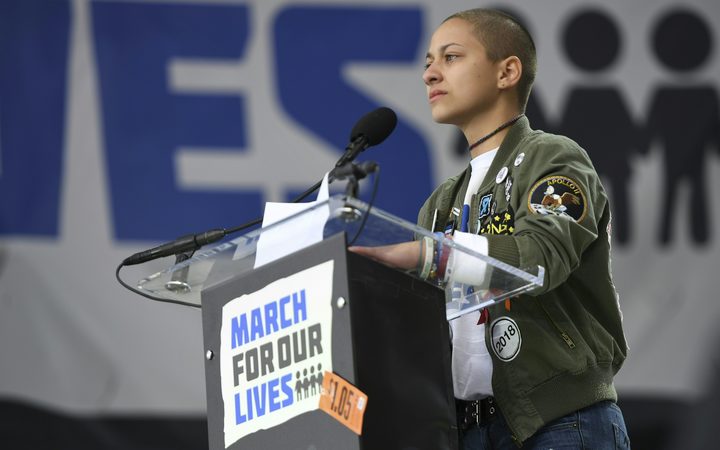 After listing the names of the victims, she stayed silent on stage for six minutes, 20 seconds - the time it took for them to be killed.

As events began to draw to a close on the US east coast, they continued on the west, including a major demonstration in Los Angeles.

This is what a real pro-life movement looks like. #MarchForOurLives pic.twitter.com/ozjOUUn70N

Ms Gonzalez, one of the more well-known Parkland school students, delivered a powerful speech in which she listed the 17 people killed before she fell silent for six minutes and 20 seconds.

"Fight for your lives before it’s someone else’s job." - @Emma4Change #NeverAgain #MarchForOurLives pic.twitter.com/7a1ESroD1I

When an alarm beeped, she turned it off and noted the minutes that had passed, saying they represented the exact time it took the shooter to gun down her classmates.

"The shooter has ceased shooting and will soon abandon his rifle, blend in with the students as they escape and walk free for an hour before arrest. Fight for your lives before it is someone else's job."

The crowd erupted into chants of "Emma, Emma" as she left the stage.

"Just like you, I've had enough," he told them.

The Washington teenager lost his brother Zaire to an armed gunman last year. Four months later, a pupil at his school was shot dead.

He told the Washington Post earlier this week that he felt frustrated inner-city victims were not given the same attention as those in Florida. 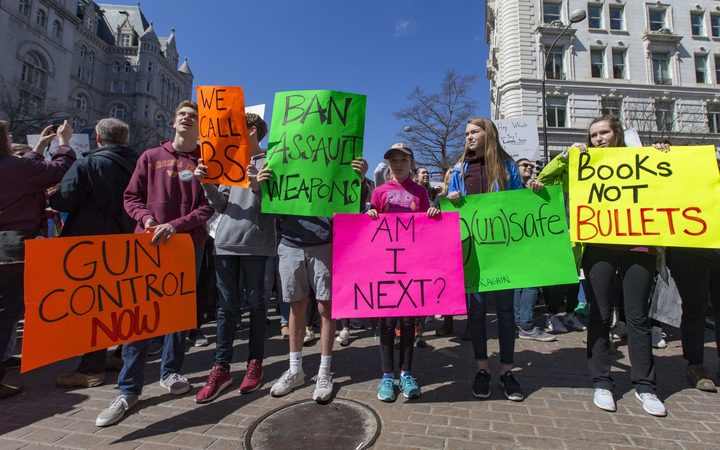 People pose with their signs at the March for Our Lives rally in Washington, DC. Photo: AFP

Huge crowds - including a high proportion of young people and children - gathered along Pennsylvania Avenue, with placards reading "Protect kids not guns" and "Am I next?".

Singers Ariana Grande, Miley Cyrus and Lin-Manuel Miranda performed on a stage erected in front of the US Capitol building.

Participants wanted to seize on public outrage in the wake of the 14 February massacre at Marjory Stoneman Douglas High School in Parkland to convince US politicians to finally take decisive action, including by banning the sale of assault weapons. 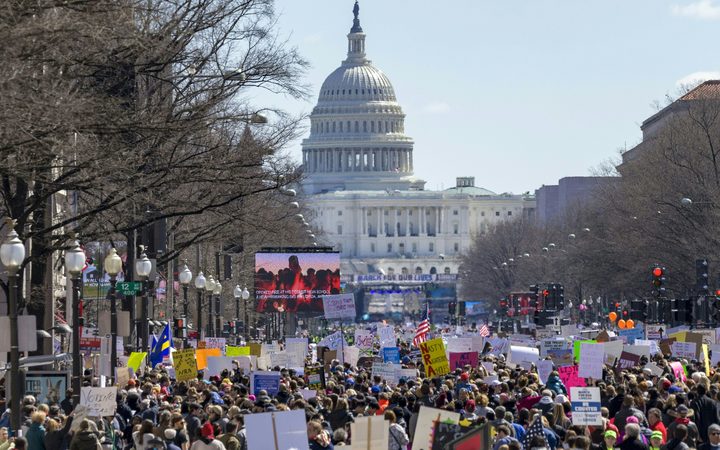 Thousands gather at the March for Our Lives rally in Washington, DC. Photo: AFP

However, the issue divides Americans. The right to bear arms is protected under the 2nd amendment of the US constitution and the National Rifle Association (NRA) gun lobby remains highly influential.

President Donald Trump is at his Mar-a-Lago resort in Florida for the weekend.

“We are here to represent students from my college and those who are now in heaven.” #MarchForOurLives pic.twitter.com/PlH0zWxj9C

It also cited steps it is taking to tackle gun violence, including banning bump stocks, plus enacting the STOP School Violence Act, which seeks to improve school security and increase training for students, staff and local law enforcement.

There are also plans to improve criminal background records so gun buyers are properly vetted before making a purchase. 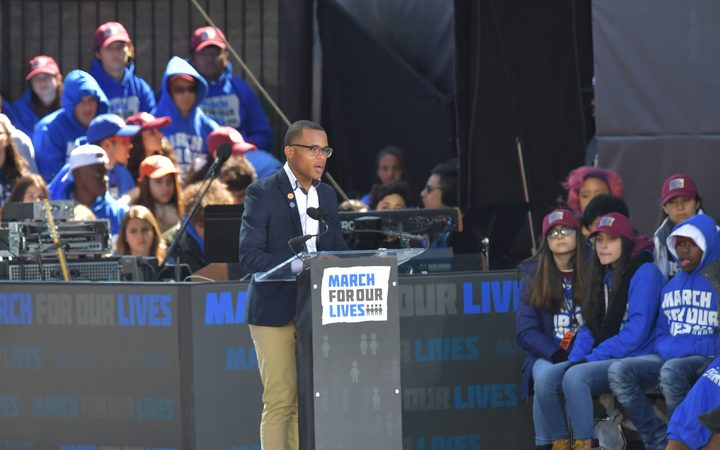 Student Zion Kelly speaks at the March for Our Lives rally in Washington DC. Photo: AFP

A demonstration has also been held in Parkland, with relatives of the victims speaking to crowds.

At a rally in Houston, Texas, Mayor Sylvester Turner called the events a defining moment in US history and announced a commission to tackle gun violence on a local level.

Families of the victims of the 1996 school shooting in Dunblane, Scotland, also joined a solidarity demonstration outside the US consulate in Edinburgh.

Paul McCartney is marching in Central Park. “One of my best friends was killed by gun violence right around here.” #imagine

In London, several hundred people gathered outside the new US embassy in Vauxhall, carrying placards addressed to US politicians and the NRA, saying "protect kids not guns" and "books not bullets". The crowd was a mix of US immigrants and allies.

About 69 percent of Americans think gun laws should be tightened, according to a new poll by the Associated Press and the NORC Center for Public Affairs Research, up from 61 percent in October 2016.