The government will push for an exemption to newly-announced US tariffs on steel and aluminium, the Finance Minister says. 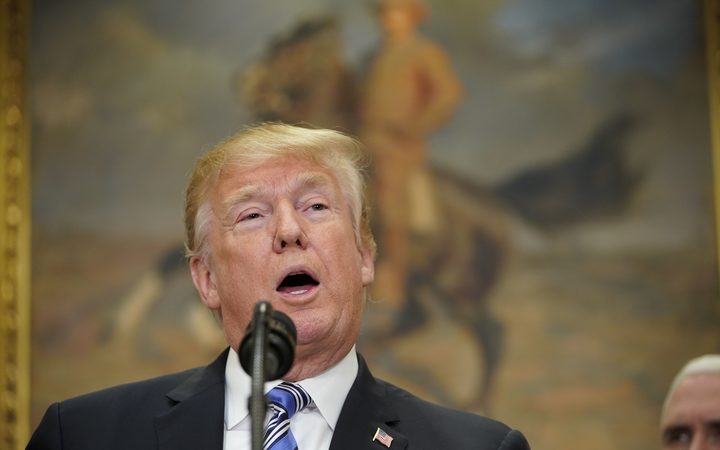 US President Donald Trump speaks before signing Section 232 Proclamations on Steel and Aluminum Imports in the Oval Office of the White House. Photo: AFP

US president Donald Trump has imposed controversial tariffs of 25 percent on steel and 10 percent on aluminium in retaliation to what he has called "unfair trade".

But countries had expressed outrage at his plans, and experts warned of new trade wars.

The tariffs will go into effect in 15 days and include exemptions for Canada and Mexico.

New Zealand finance minister Grant Robertson said he did not support the tariff and did not want a trade war.

Officials would look into the extent of the tariffs and how New Zealand might secure an exemption, Mr Robertson said.

The announcement highlighted the need for New Zealand to seek diverse trade with new markets, he said.

A revamped version of the Trans Pacific Partnership, which the US withdrew from last year, was signed earlier today in Chile.

Australia, which sends more than $US400 million of steel and aluminium to the US each year, is also hoping for an exemption.

Its foreign minister, Julie Bishop, said her government would be lobbying hard.

The tariffs announced today appear to soften what Mr Trump billed last week as a global, "no-exceptions" move to protect the two industries under a 1962 national security trade law.

The White House said the tariff proclamations will allow other countries to discuss with the administration "alternative ways" to address the national security threat caused by their steel and aluminum exports to the United States, the official said.

The tariff plan has angered US allies, including Canada, Mexico, Britain and members of the European Union, who argue that their exports to the United States do not pose a threat to US national security.

Some, including the EU, have threatened retaliatory tariffs on US products such as bourbon whiskey and Harley-Davidson motorcycles.

"All countries will be welcome to discuss with the United States alternative ways to address the threatened impairment of the national security caused by their imports," a White House official said.

The exemptions for Canada and Mexico would start immediately with an unspecified duration. Their continuation depends partly on progress in negotiations to modernize the North American Free Trade Agreement, the official said. He added that NAFTA was an important part of the US-Canada-Mexico security relationship.

But the official said that with any alternative remedies, it was important to maintain the target for increasing steel and aluminum industry capacity utilization, which could result in higher tariffs for other countries.

"If Canada and Mexico were to be excluded, we would perhaps maybe have to raise the tariffs on everybody else - and modestly I might add, modestly - to ensure that our steel and aluminum industries are defended," he said.

The "wonderfully flexible document" is designed to accommodate U.S. security relationships with other countries and provide "ironclad" protections for the industry, he said.

The head of the UN trade and development agency Unctad said the tariffs would take a toll on poorer countries and could trigger takeovers in their mining industries.

Mukhisa Kituyi said they were casualties of the process, but there was very little they can do right now, because the least-developed countries were incapable of retaliatory action against the US.

Mr Kituyi said the ripple effect was that producers of bauxite or iron ore will have downward pressures on the value of their commodity, and bigger companies will wind up taking over smaller suppliers.