A month-long committal hearing is underway in Melbourne for Australia's most senior Catholic Cardinal George Pell, who is facing allegations of historical sex abuse. 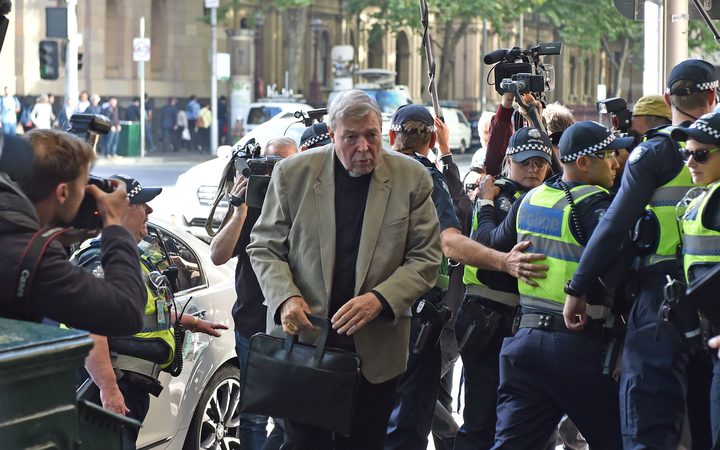 The 76-year old, who is the Vatican Treasurer, made no comment as he arrived at court amid high security to front a 25-minute administrative hearing at the Melbourne Magistrates' Court to start the procedures.

Cardinal Pell has denied the allegations. His lawyers have accused Victoria Police of failing to follow procedure in investigating Australia's most senior Catholic cleric, and of working under the presumption he was guilty.

The hearing will determine if there is sufficient evidence to warrant a trial.

Cardinal Pell was charged by detectives from Victoria Police's Sano taskforce in June last year and was granted leave by the Pope to return to Australia from the Vatican to fight the charges.

One of the charges was withdrawn by prosecutors during a hearing in the Melbourne Magistrates' Court on Friday.

No other details can be reported for legal reasons.

Cardinal Pell's defence barrister, Robert Richter QC, opposed an application for part of the police brief of evidence against his client to be removed, saying about 21 witness statements that could possibly clear Cardinal Pell had been supplied to the police that were not investigated properly.

"These documents are certainly relevant to the alleged offences. I know they don't suit the prosecution because they're exculpatory [favourable to the defendant], but they're still there and they're in the possession of the police," he said.

Mr Richter also called for a report detailing how police should go about prosecuting prominent people to remain as part of the evidence.

"We say that was not followed because there was a presumption of guilt," he said.

Mr Richter said he intended to cross-examine on those issues.

Prosecutor Mark Gibson SC said a number of the historical sexual offence charges also needed to be amended to adjust dates and wording.

Family member expected to give evidence

Magistrate Belinda Wallington granted permission for a support person from the witness assistance program to accompany the complainants as they give their evidence via video link from a remote facility.

They will begin giving evidence this afternoon for up to two weeks, during which time the court will be closed - standard practice in Victoria for cases involving alleged sexual offence charges.

Ms Wallington said she would also allow a support dog called Cooper to accompany the complainants as they gave their evidence.

Cardinal Pell was given permission to have a support person with him in court as the complainants give evidence, due to his "age and medical condition".

The court heard a number of the complainants' parents and siblings will also give evidence during the committal proceeding.

The hearing was adjourned until 2pm when the first complainant would begin giving their evidence.

"For the avoidance of doubt and because of the interest might I indicate that Cardinal Pell pleads not guilty to all charges and will maintain his presumed innocence," he said.