North Korea has been sending equipment to Syria that could be used in chemical weapons manufacturing, US media report, citing findings by UN experts. 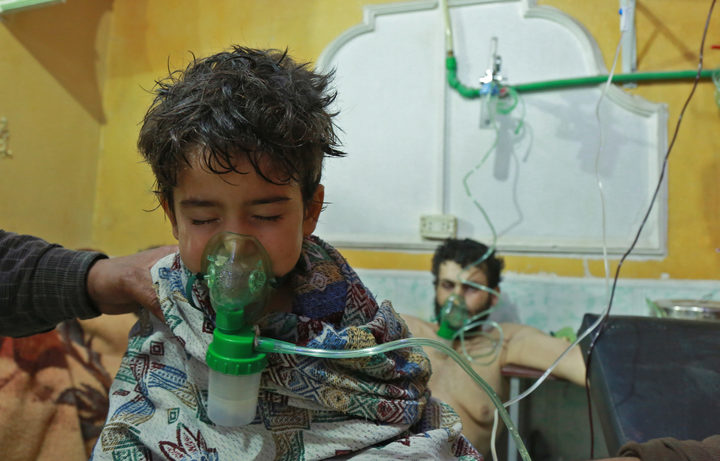 Syrian children and adults receive treatment for a suspected chemical attack that killed a child and 13 adults at a makeshift clinic on the rebel-held village of al-Shifuniyah in the Eastern Ghouta region on the outskirts of Damascus on 25 February 25, 2018. Photo: AFP PHOTO / HAMZA AL-AJWEH

The allegations came after new reports of chlorine gas being used by Syrian forces, which the government denies.

North Korea is under international sanctions over its nuclear programme.

The supplies reported to have been illicitly sent to Syria by North Korea included high-heat, acid-resistant tiles, corrosion-resistant valves and thermometers. The tiles are said to be used to construct facilities where chemical weapons are produced.

Five shipments were sent to Syria via a Chinese trading firm during late 2016 and early 2017, the Wall Street Journal said. They are allegedly part of dozens of shipments over several years.

The Scientific Studies and Research Center (SSRC) - a Syrian government agency - is said to have paid North Korea via a number of front companies, the newspaper reported.

The report - also seen by the Washington Post - was compiled by the UN Panel of Experts which assesses North Korea's compliance with UN resolutions.

In a September 2017 report, which is publicly available, the group said it was "investigating reported prohibited chemical, ballistic missile and conventional arms cooperation" between Syria and North Korea.

It said that two UN member states had intercepted shipments bound for Syria, and that the goods were suspected to be supplied by North Korea's main arms exporter as part of a contract with front companies representing the SSRC.

UN spokesman Stéphane Dujarric did not say whether the leaked report would be published, but told the New York Times: "I think the overarching message is that all member states have a duty and responsibility to abide by the sanctions that are in place."

The Syrian government is reported to have told the UN panel that the only North Koreans present in Syria are sports coaches and athletes.

Syria signed up to the Chemical Weapons Convention and agreed to have its declared chemical weapons stock destroyed in 2013 after a sarin gas attack killed hundreds of people in Ghouta.

It has been accused of repeatedly using banned chemical weapons in the civil war since then.

The Organisation for the Prohibition of Chemical Weapons (OPCW) concluded that sarin nerve gas was used in Khan Sheikhoun, in Idlib province, last April in an incident that killed more than 80 people. UN investigators said the Syrian air force was to blame.

The US carried out missile strikes on a Syrian air base in response but President Bashar al-Assad maintained the incident was faked.

Suspected chlorine gas attacks have been recently reported in Syria, including on Sunday in the Eastern Ghouta, a besieged rebel-held enclave near the capital Damascus.

The OPCW is investigating those attacks, Reuters news agency reports, citing diplomatic sources. UK Foreign Secretary Boris Johnson is among Western leaders who have suggested the Syrian government could be attacked if there is fresh "incontrovertible" evidence that chemical weapons have been used against civilians.

Experts said that North Korea had long offered military supplies and weapons know-how around the world in exchange for cash.

The UN report is said to highlight its efforts to illicitly trade with dozens of countries and groups in the Middle East, North Africa and Latin America.

North Korea is already under a range of international and US sanctions over its nuclear programme and missile tests.

But it continued tests last year, including tests of a nuclear weapon and a long-range ballistic missile capable of reaching the US.

The US says the new sanctions are designed to put a further squeeze on North Korea, cutting off sources of revenue and fuel for its nuclear programme and clamping down on evasion of already existing restrictions.