Fighting continued in the rebel-held Eastern Ghouta area of Syria during the first daily five-hour "pause" ordered by the government's ally Russia. 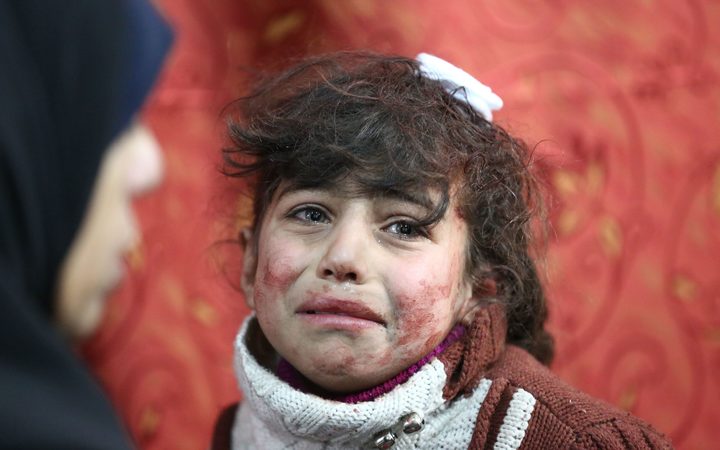 Activists said there were government air and artillery strikes, while Russia said rebels had shelled a "humanitarian corridor" meant to let civilians leave.

As a result, there were no UN aid deliveries or medical evacuations.

Some 393,000 people are trapped in the enclave near Damascus, which has been besieged by the government since 2013.

Medics say more than 500 people have been killed since the government intensified its bombardment nine days ago in an attempt to retake the enclave.

Russia's defence ministry, meanwhile, said rebels in the Eastern Ghouta "went on the offensive" during the pause, including attacking government positions in two settlements.

As the truce broke down, France urged Russia to use its influence over Syrian President Bashar al-Assad to secure a 30-day ceasefire covering the whole country, as demanded by the UN Security Council on Saturday.

"Russia is one of the only actors that can get the regime to implement the resolution," French Foreign Minister Jean-Yves Le Drian told his Russian counterpart Sergei Lavrov in Moscow.

What is happening on the ground? 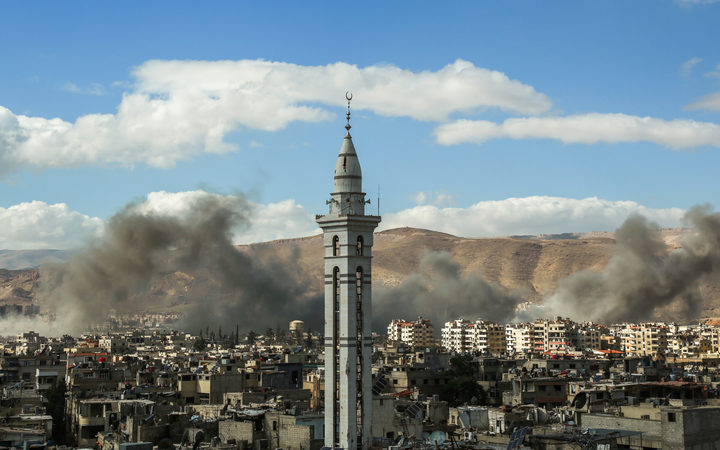 A picture taken on February 27, 2018, shows smoke plumes rising during reported regime bombardment Syrian rebel-held town of Douma, in the besieged Eastern Ghouta region on the outskirts of the capital Damascus. Photo: AFP

Fighting was reported by monitors including the UN after the Russian-ordered pause began at 09:00 local time.

The situation meant that humanitarian convoys could not go in, and medical evacuees could not come out, UN officials said.

The World Health Organization said it had a list of more than 1,000 critically sick and wounded people who urgently needed to be evacuated.

The situation in the Eastern Ghouta was comparatively calm early on Tuesday. However, one civilian was killed by shellfire in the rebel-held town of Douma before the pause started, according to the Syrian Observatory for Human Rights.

The UK-based monitoring group also reported a number of violations in the five hours that followed, including air strikes by government planes and helicopters, and artillery shelling in the town of Jisrin that killed a child and injured six people. Ten people were also reported injured in Misraba.

The Syrian state news agency, Sana, reported that "terrorists" had shelled the route of the humanitarian corridor leading to the government-controlled al-Wafideen checkpoint, which is north-east of Douma, and were using "human shields".

Russian media said not a single civilian had left the besieged area as a result.

The accusations of firing mortars was denied by the two Islamist rebel groups that dominate the Eastern Ghouta, Jaysh al-Islam and Faylaq al-Rahman, while the Syrian military said it had not carried out air strikes.

Rebel factions also reiterated that jihadists from the al-Qaeda-linked alliance Hayat Tahrir al-Sham (HTS), who have a small presence in the Eastern Ghouta, had to be evacuated in exchange for a truce. The government and Russia say their bombing campaign is targeting HTS members in the enclave.

What was supposed to happen?

The Russian defence ministry announced that government forces would "cease strikes on terrorists" from 09:00 until 14:00 local time (07:00-12:00 GMT) daily from Tuesday "with the aim of immediately saving the peaceful population".

One "humanitarian corridor" to al-Wafideen had been prepared, with help from the Syrian Arab Red Crescent, to allow civilians to leave and the sick and wounded to be evacuated, it said.

Residents would be informed via leaflets, text messages and videos, it added.

The future of the truce and whether the daily "pause" is extended will "depend on how the terrorist groups behave," Kremlin spokesman Dmitry Peskov has said.

Will the pauses allow aid to be brought in?

France's foreign minister said it was vital that humanitarian aid was delivered, but aid organisations - including the International Committee of the Red Cross - argue the time provided by the Russian initiative is not nearly enough.

A tightening of the government's siege since November has led to the exhaustion of food supplies and extremely inflated prices inside the Eastern Ghouta. Almost 12% of children under five years old are acutely malnourished - a level the UN says is unprecedented in Syria.

Humanitarian organisations say they need to be sure any truces are taking effect on the ground before sending in aid workers and vehicles.

Dr Mohamad Katoub, a Turkey-based doctor with the Syrian American Medical Society (SAMS), which supports hospitals in the Eastern Ghouta and other rebel-held areas, told the BBC: "We don't believe that this truce will bring any benefits for the civilians inside Eastern Ghouta. Five hours is not enough to do anything."

Will people be able to get out during the pauses?

Firas Abdullah, a journalist for the pro-opposition Ghouta Media Center who lives in Douma, told the BBC on Tuesday that it was far too dangerous to venture outside, let alone try to reach the al-Wafideen checkpoint.

"I went outside but only for a while," Firas Abdullah said. "After half a minute of this ceasefire, shells were dropped. Even if anyone tries to leave, he will be shot by the snipers of the regime checkpoint."

Al-Wafideen has long been the formal point for people to enter and exit Eastern Ghouta.

However, only a small proportion of the population - public sector employees and males over 40 - were permitted to leave before the government siege was tightened, according to Reach Initiative, which is monitoring the humanitarian situation there. Women and children were reportedly forbidden by rebel groups from leaving for security reasons.