US President Donald Trump has said he would have run in to the Florida high school where 17 people were shot dead this month even if he was not armed. 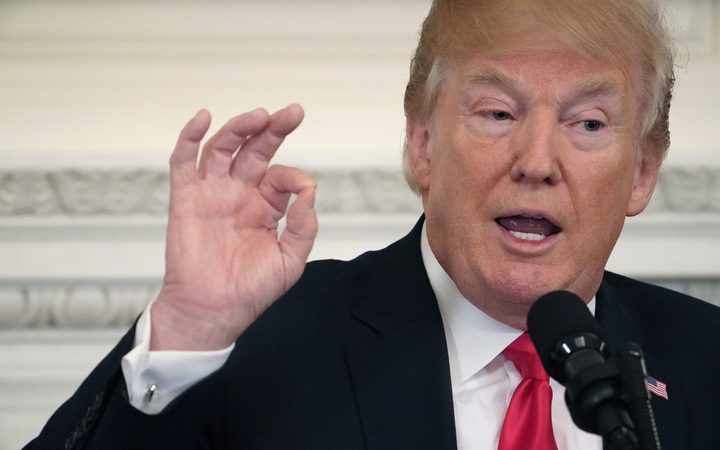 "I really believe I'd run in there even if I didn't have a weapon," Mr Trump told a group of state governors gathered at the White House.

Mr Trump also said it was "disgusting" that officers reportedly did not confront the suspect on 14 February.

The massacre was the second-deadliest shooting at a US school.

"I think most of the people in this room would have done that, too," said Mr Trump on Monday of his assertion that he would have rushed into the school.

He added: "You never know until you're tested."

A state inquiry was launched on Sunday into law enforcement's response to the massacre at Marjory Stoneman Douglas High School.

Scot Peterson, a sheriff's deputy officer who had been assigned to the high school, resigned last week as it emerged he had remained outside Building 12 where most of the students were killed by the ex-student.

Mr Trump had previously suggested that the actions taken that day by Mr Peterson - who has since resigned from the force - could have made him a "coward".

Broward County Sheriff's Office is reportedly also investigating why three of its deputies apparently remained outside the building with their guns drawn as the attack unfolded.

Mr Trump criticised those officers as well, saying they "weren't exactly medal of honour winners"- a reference to the US military award for valour.

"The way they performed was frankly disgusting," Mr Trump added.

A lawyer for Mr Peterson - a 32-year police veteran - hit back against Mr Trump's claim, saying his client had been "maligned" by his previous boss, Sheriff Scott Israel.

"Let there be no mistake, Mr Peterson wishes that he could have prevented the untimely passing of the 17 victims on that day, and his heart goes out to the families of the victims in their time of need," said his lawyer Joseph DiRuzzo III.

"However, the allegations that Mr Peterson was a coward and that his performance, under the circumstances, failed to meet the standards of police officers are patently untrue.

"Mr Peterson is confident that his actions on that day were appropriate under the circumstances and that the video (together with the eye-witness testimony of those on the scene) will exonerate him of any sub-par performance," the lawyer's statement said.

Sheriff Israel has defended himself from criticism amid calls for his resignation, saying that he should not be blamed for the actions of a rogue "deserter".

"I've given amazing leadership to this agency," he said during an interview with CNN on Sunday, insisting that he has no plans to quit.

Students are preparing to return full-time to their classrooms on Wednesday after some attended a volunteer "orientation" on Sunday.

"It's like the first day of school," a 16-year-old girl in attendance told the New York Times.