An armed officer who stood outside a Florida school where a gunman killed 17 people last week "certainly did a poor job", US President Donald Trump says.

Deputy Scot Peterson resigned after an investigation found he failed to confront the suspect.

Mr Trump said Mr Peterson might be a "coward" who "didn't react properly under pressure". 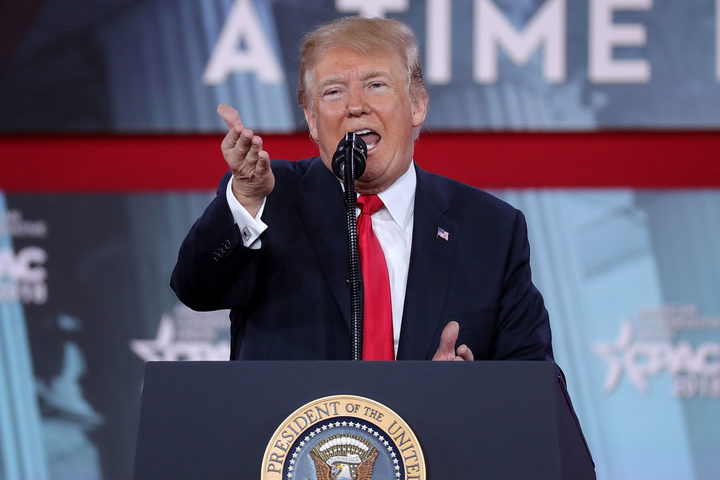 Florida's governor on Friday called for law enforcement officers to be placed in every public school in the state.

Governor Rick Scott also called for "active shooter training" for all students and staff at Florida public schools, adding that he planned to raise the state's minimum age for buying guns to 21 years old.

He also said he wanted to make it "virtually impossible for anyone who has mental health issues to use guns."

"If a court involuntarily commits someone because they are a risk to themselves or others, they would be required to surrender all firearms and not regain the right to purchase or possess a firearm until a court hearing," he said during a speech about a new proposal on guns in Tallahassee.

This week the president proposed arming teachers as a solution to school safety, a method that has long been championed by the powerful National Rifle Association (NRA) gun lobby.

Mr Trump touted his love for the second amendment, which protects gun rights, while speaking at the Conservative Political Action Conference (Cpac) on Friday morning.

"He trained his whole life but when it came time to do something he didn't have the courage," Mr Trump told reporters outside the White House before his speech on Friday. "He certainly did a poor job."

What did the officer do?

He said video footage showed Mr Peterson arriving at the building where the shooting broke out about 90 seconds after the first shots were fired, and that he remained outside for about four minutes. The attack lasted six minutes, Sheriff Israel said.

"I am devastated. Sick to my stomach. He never went in [the school]," Sheriff Israel said.

Asked what Mr Peterson should have done, Sheriff Israel said: "Went in, addressed the killer, killed the killer."

Mr Peterson is yet to publicly comment on what happened. Officers are reportedly guarding his home.

Sheriff Israel said Mr Peterson had not given a reason for why he did not go into the building where the shooter was. It is unclear if he will face charges.

Sheriff Israel said he would not be releasing the video showing Mr Peterson and might never do so, "depending on the prosecution and criminal case" against the 19-year-old suspect accused of carrying out the shooting, former student Nikolas Cruz.

The gunman used a semi-automatic AR-15 rifle, police say, and escaped the scene before being seen and arrested later.

School resource officers are sworn law enforcement officers who are responsible for safety and crime prevention in schools, although their exact roles differ from school to school and authority to authority.

Employed by the local police or sheriff's office, they document incidents and can make arrests, as well as working on areas such as mentoring and education.

There are between 14,000 and 20,000 such officers in the US, according to the National Association of School Resource Officers.

Mr Peterson had been in his position at the school since 2009, local media report.

The Sun-Sentinel newspaper said he had worked for the sheriff's office since 1985 and office records showed his salary for 2016 was $US75,673.