A bullish US President Donald Trump has proclaimed a "new American moment" as he delivered his maiden State of the Union speech to Congress. 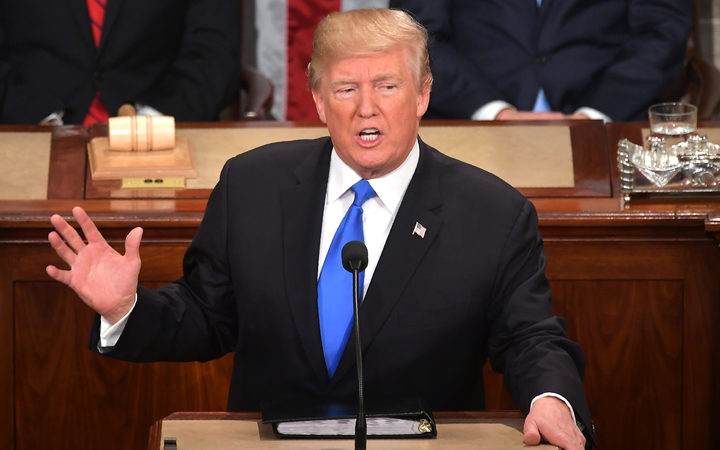 US President Donald Trump delivers his State of the Union address. Photo: AFP

In a primetime address, the Republican leader said he was "extending an open hand" to Democrats to work together.

Mr Trump also said he was ordering Guantanamo Bay to be kept open, reversing an Obama-era directive to close the controversial detention camp.

In an upbeat message a world away from his apocalyptic "American carnage" inaugural speech of just a year ago, Mr Trump said his administration was "building a safe, strong and proud America".

"There has never been a better time to start living the American dream," he told lawmakers. 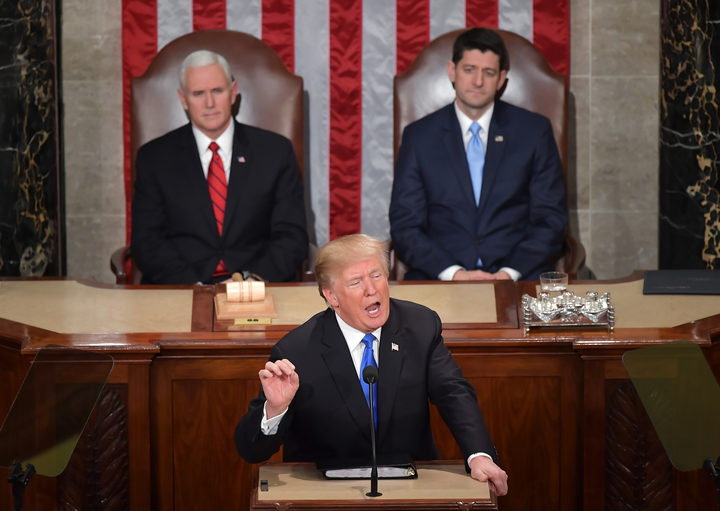 US Vice President Mike Pence (L) and Speaker of the House Paul Ryan listen as US President Donald Trump gives his State of the Union address. Photo: AFP

As many as 40 million television viewers were expected to tune in as he implored the nation to come together as "one team, one people and one American family".

Mr Trump made a plea for the kind of bipartisan co-operation that has been in short supply during a turbulent first year in office.

The president, who has enraged Democrats by withdrawing protections for immigrants who entered the US illegally as children, offered an olive branch.

"Tonight I am extending an open hand to work with members of both parties, Democrats and Republicans, to protect our citizens of every background, colour and creed."

Mr Trump again touted his pet plan to rebuild America's aging roads and other infrastructure, though he did not offer many details.

The president said 2.4 million jobs had been created on his watch.

Since he came to office, the stock market has soared and the unemployment rate is at a 17-year low as the US continues its recovery from the Great Recession of a decade ago.

But Mr Trump has often complained that he does not get enough credit for the rosy outlook.

He had an average job approval last year of 38 percent, the lowest first-year rating for any president in the history of Gallup polling.

He attempted to seize Mr Trump's political mantle by purporting to speak for "Americans who feel forgotten and forsaken".

Bewailing a "fractured country" and depicting the Trump presidency as "chaos", Mr Kennedy, 37, said: "Many have spent the past year anxious, angry, afraid."

"Bullies may land a punch," he said. "They might leave a mark ... but they have never, not once, in the history of our United States, managed to match the strength and spirit of a people united in defence of their future."

In one telling moment from Mr Trump's speech, members of the Democratic Congressional Black Caucus sat in stony-faced silence amid a standing ovation as the president noted African-American unemployment has hit a record low.

About a dozen Democratic lawmakers said they would boycott Mr Trump's speech.

One of them, California congresswoman Maxine Waters, told MSNBC: "Why would I take my time to go and sit and listen to a liar?"