More than 10 years after finding foot and tail fossils in Victoria's south west, scientists have identified a new dinosaur that roamed what has been described as Australia's "lost world". 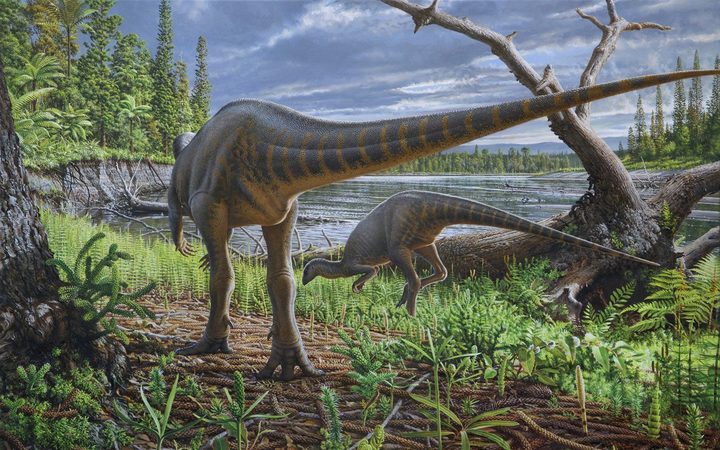 The fossils were found in 113-million-year-old rocks that form a sea platform near Cape Otway in 2005 by a volunteer prospector.

Scientists had now figured out the bones belonged to a turkey-sized herbivore, which lived in the Australian-Antarctic rift valley, University of Queensland's School of Biological Sciences alumnus Matt Herne said.

"It takes time and very careful and detailed examination, so that's partly why it's taken so long to get out to now."

The dinosaur has been named Diluvicursor pickeringi, meaning Pickering's flood-running dinosaur, after the late David Pickering, who was Museums Victoria's collection manager for vertebrate palaeontology.

Dr Herne said it took a team of people doing field trips to work out what the dinosaur was like and the kind of environment it lived in.

"From what we can tell, even though it's only preserved a tail and a foot, from those bones, we can talk from similarly related things, that it was a biped, so it ran around on its two strong hind legs," he said.

"The size of its leg bones and its tail do indicate its size, and it was probably the size of a turkey."

This particular dinosaur probably weighed between 3 or 4 kilograms, but its species have grown to a size of 2.3 metres in length, and up to 17kg.

Unlike the turkey, it was probably scaled, rather than feathered, with a beak and grinding teeth for eating vegetation.

The team's research also involved a detailed analysis of what the Australian-Antarctic rift would have been like when it was inhabited by dinosaurs.

"The environment that they lived in is really exciting, because it was in fact a big rift valley that existed between Australia and Antarctica," Dr Herne said.

"And on the eastern margin of it was a massive volcanic mountain range, possibly akin to the Andes, and of course this all gone now.

"So what we're looking at is a lost world, basically Australia's lost world … the only rocks that we can actually visit and look at this lost world are on the south coast of Victoria."