A 200-million-year-old reptile is rewriting the rulebooks on how four-legged animals conquered the world. 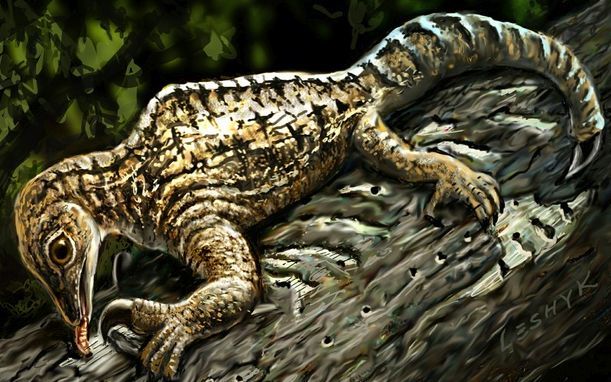 Newly discovered fossils suggest Drepanosaurus had huge hooked claws to dig insects from bark, much like today's anteaters in the forests of Central and South America.

Scientists say the creature defies the convention on how reptiles evolved and flourished.

Their research is published in the journal Current Biology.

The new fossils, found in a New Mexico quarry, suggest Drepanosaurus was the size of a cat and lived in the trees.

It had a bird-like head on a chameleon-like body, but the most unusual feature was its forearms, said Dr Adam Pritchard, of Yale University, who led the research.

"Drepanosaurus itself has extremely massive arms and forearms - very muscular," he said.

"The index finger is much much larger than any of the other fingers and supports this gigantic claw, which is easily the most massive bone of the entire arm."

The forelimbs of tetrapods are known for their versatility, used to walk, dig, fly or swim.

However, the basic plan of the forelimb has stayed much the same throughout 375 million years of evolution.

The US team made 3D reconstructions of the reptile based on micro-CT (computerised tomography) scans of dozens of bones.

Other fossils that have been unearthed were partly crushed, making interpretation difficult.

But the Drepanosaurus did not have these parallel bones.

"On the one hand, it extends the bounds of what we think the arm of tetrapod animals - those four-footed animals in the world - is capable of in terms of its development, in terms of evolution.

"And, it is also remarkable in what it evidences about the ecology, the lifestyle of the animal, in that it seems to have quite independently developed adaptations that we see today in modern groups like anteaters."

"The unconventional rules in the Triassic," he said.

"Here is another animal which is completely unconventional in the way it has got this system of bones in the limb to help it dig - those are massive claws too."

Drepanosaurus disappeared at the end of the Triassic and did not lend its form to any future creatures.

"It was only useful in this one particular instance, where you have got a really specialised fossorial animal - a digger," Dr Fraser said.

"But it is the first real departure like this in the basic ground plan that you see ever since the first tetrapods invaded land 365 million years ago."

The researchers say they are continuing to excavate the quarries in New Mexico, with the hope of finding more discoveries.

"There's a lot - especially in terms of the smaller animals in the fossil record - that has remained undiscovered," said Dr Pritchard. "I don't see an end to it."