A newly discovered species of Tyrannosaur - the group of meat-eating dinosaurs to which the infamous T-Rex belongs - could hold the key to how these creatures grew so huge.

Scientists from the University of Edinburgh, along with US and Russian colleagues, discovered the fossilised remains of the animal in Uzbekistan.

They have named it Timurlengia. 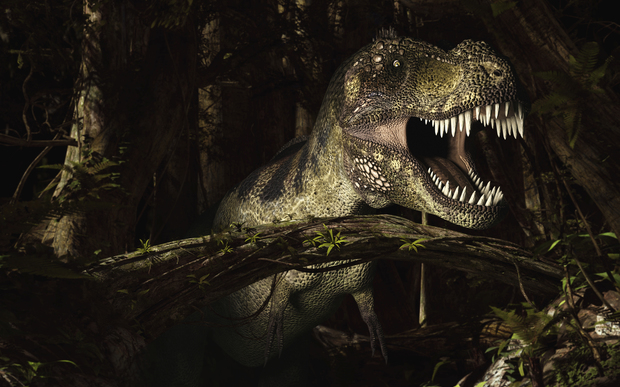 The infamous T-Rex belongs to the same family as the newly discovered Timurlengia. Photo: AFP

A study of the 90-million-year-old beast suggested its ears and brain were crucial in Tyrannosaurs' dominance.

"We have a totally new species of dinosaur," explained lead researcher Dr Stephen Brusatte from the University of Edinburgh.

"It's one of the very closest cousins of T-Rex, but a lot smaller - about the size of a horse.

"And it comes from the middle part of the Cretaceous period - a point where we have a huge gap in the fossil record."

This "frustrating" gap has made T-Rex - which was found later in the period and measured up to 13m head to tail - something of an evolutionary mystery. That is what this find has helped to resolve.

"It has features of its bones that are also found in T-Rex," said Dr Brusatte. "So this is evolving features that would eventually allow T-Rex to become this super-dominant top-of-the-food-chain animal."

The team studied about 25 sections of Timurlengia's skeleton, piecing it together to work out its size and shape.

Most revealing was a part of the animal's skull, which the team scanned to work out the shape of its brain and inner ear - an attempt to build a picture of its sensory capabilities.

"Its brain and ear - which we can tell from CT scans - were almost identical to T-Rex," said Dr Brusatte.

"So it had all the central processing unit there, all the intelligence, all the keen senses of T-Rex and maybe that's what allowed T-Rex to become so big."