The normally glittering red carpet at the 75th Golden Globes was awash in black this afternoon. 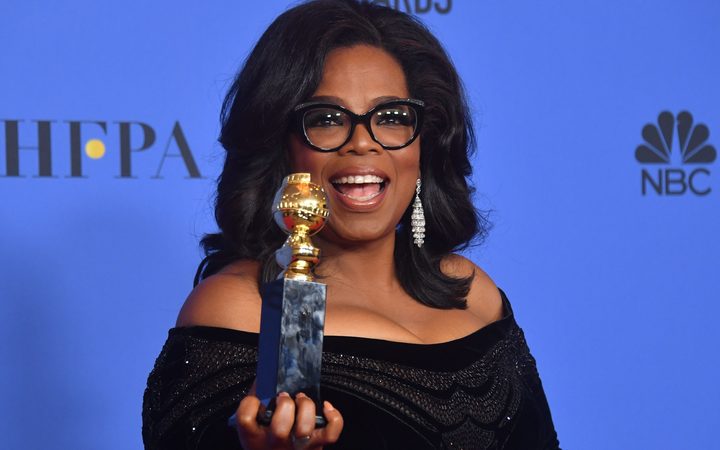 Actress and TV talk show host Oprah Winfrey with the Cecil B DeMille Award. She was praised for her speech which addressed recent sexual harassment scandals sweeping Hollywood. Photo: AFP

Held at the luxurious Beverly Hilton in California, the globes kick off film award season. This 75th edition was also the first major ceremony since Hollywood was hit by a raft of sexual harassment scandals.

One of the evening's highlights was Oprah Winfrey making history by receiving the prestigious Cecil B DeMille Award.

Winfrey is the first black woman to be honored since the award's inception in 1952.

While receiving the trophy, Winfrey delivered a goosebump-inducing speech that received several standing ovations, and hammered home the message underpinning the evening's events.

"I want all the girls watching here now to know that a new day is on the horizon," Ms Winfrey told the crowd amid rapturous applause.

"And when that new day finally dawns, it will be because of a lot of magnificent women, many of whom are right here in this room tonight, and some pretty phenomenal men."

THEY'RE JUST GOING TO GO ON WITH THE CEREMONY LIKE THAT #OPRAH SPEECH DIDN'T JUST FOREVER CHANGE CIVILIZATION AT THE CELLULAR LEVEL? Cool cool cool cool tight tight. #GoldenGlobes pic.twitter.com/14R7EaCn2j

She also expressed shock that the channel's female hosts don't receive the same remuneration as its male presenters.

Debra Messing calls out E! while on E!: "I was so shocked to hear that E! doesn't believing in paying their female co-hosts the same as their male co-hosts. I miss Cat Sadler." pic.twitter.com/dnqoMkh7YY

And despite attempts from red carpet reporters to discuss something else, actors kept on-message.

I love that every time Seacrest tried to talk about Michelle Williams' #GoldenGlobes nom, she kept turning it back to Tarana Burke, her date who started the #MeToo movement. Then she said this: pic.twitter.com/8dUBEoS5BZ

However, E! Wasn't quite playing ball and cut away to frock-shots while Michelle Williams' date, activist Tarana Burke, spoke about her work with the #metoo campaign.

Williams wasn't the only one to bring an activist to the globes with Marai Larasi, Rosa Clemente, Ai-jen Poo, Mónica Ramírez, Calina Lawrence, Saru Jayaraman and Billie Jean King coming as dates.

It wasn't just the ladies calling for change, with Denzel Washington notably throwing his support behind the movement.

Denzel Washington on #MeToo at #GoldenGlobes: "It's important tonight but it's important to follow through. It's important to see what's going to happen a year from tonight. So that takes all of our effort & real movement & real change of ... laws, but rules of behavior." pic.twitter.com/Njtwi4b1lg

Justin Timberlake also got involved and put on a Time's Up pin - but not everyone was impressed.

Meanwhile, Mariah Carey was content to sit back and *sip tea* and watch it all unfold.

Are they serving tea here? #GoldenGlobes

The discussion around sexual abuse and harassment didn't stop at the doorway, with host Seth Meyers taking aim at movie mogul Harvey Weinstein during the ceremony's opening minutes.

"Harvey Weinstein isn't here tonight because, well, I heard rumors that he's crazy and difficult to work with," he said.

"Don't worry, he'll back in 20 years. He'll be the first person ever booed during the In Memoriam."

The opening monologue also saw Meyers rope in Amy Poehler for a gag where she temporarily stole the limelight.

"I do the setup, you do the punchline," Meyers instructed Poehler.

"Oh, is that how it works? You're explaining something I already know. Is this the mansplaining part of the evening?" Poehler quipped.

I'm gonna get so much use out of this GIF #GoldenGlobes pic.twitter.com/UBYTI2hFLN

Seth Meyers nailed that. Amy Poehler nailed that. As strong a monologue as there's been for one of these things, in impossible circumstances, at that. #GoldenGlobes

As the evening rolled on and awards were dished out, many actors had important messages to share.

Nicole Kidman was the first actor to pick up an award (handed out by Wonder Woman actor Gal Gadot) and served up a tear-jerking acceptance speech that had Reese Witherspoon - and most of Twitter - in full agreement.

#GoldenGlobes winner Nicole Kidman: "I do believe and I hope we can elicit change through the stories we tell and the way we tell them" pic.twitter.com/af4l4xDtjf

Life is just the things you do between Nicole Kidman acceptance speeches.

Meanwhile Elizabeth Moss threw a huge nod to author Margaret Atwood when accepting the award for Best Performance by an Actress in a Television Series - Drama for her work on The Handmaid's Tale.

"This is for @MargaretAtwood & all the women who came before and after you who were bold enough to come forward. We are no longer the stories in the margins. We are the stories in print." - Elizabeth Moss' powerful speech accepting her #GoldenGlobes for #HandmaidsTale #MeToo pic.twitter.com/tpiyN42mFW

Some viewers questioned James Franco's past after he picked up the award for Best Performance by an Actor in a Motion Picture - Musical or Comedy for his work in The Disaster Artist.

Hey, remember when James Franco was creeping in the instagram dms of underage teenage girls and shit? Anyway he's a Golden Globe winner this year -we're just glad that everyone in that room is comfortable enough to crack jokes about predators tho

The globes caught some heat over its long-standing lack of diversity, after Sterling K Brown became the first African American man to win Best Actor in a TV Series.

I repeat: IF YOUR ORGANIZATION HAS A FIRST BLACK OR WOMAN ANYTHING IN 2017 IT'S A TRASH ORGANIZATION https://t.co/vsGevAMJed

And Natalie Portman made sure that everyone was aware that all the nominees for Best Director were men with a very pointed introduction.

Ron Howard: "We are honored ... to be here to present the award for best director."

Natalie Portman, done with this shit: "And here are the all-male nominees." pic.twitter.com/8JboypiADo