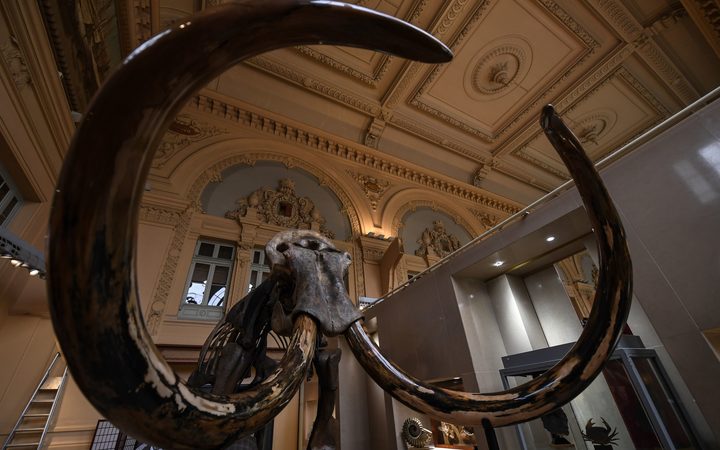 The skeleton of the mammoth which was sold at the Aguttes auction house. Photo: AFP

The skeleton, which exceeded its estimated value, is thought to be the largest of its kind in private hands.

It is a rare example because 80 percent of the skeleton is original bone. The rest is resin used to complete the assembly.

The skeleton belonged to a male mammoth and was discovered around 10 years ago in the Siberian permafrost.

Scientists say its teeth show signs of decay, which may have been a factor in its death if it was unable to graze.

Melting permafrost has led to an increasing number of mammoths being discovered, David Gelsthorpe, curator of Earth Science collections at Manchester Museum, told the BBC.

"The permafrost in Siberia particularly is melting at a very rapid rate because of climate change," he said.

"So not only are we getting these incredible skeletons coming out, but also pretty much as they died as well. We're getting things like fur, the skin, the muscles, the organs - and even the last meal."

Woolly mammoths lived alongside early man, who hunted them and portrayed them in cave drawings.

Most of the animals died out more than 10,000 years ago, but the last surviving group lived on an island in the Arctic Ocean and survived until 4,000 years ago.

Scientists believe that human hunting and environmental changes played a role in their extinction.