This year is very likely to be in to the top three hottest years on record with more extreme weather, according to provisional figures from the World Meteorological Organization. 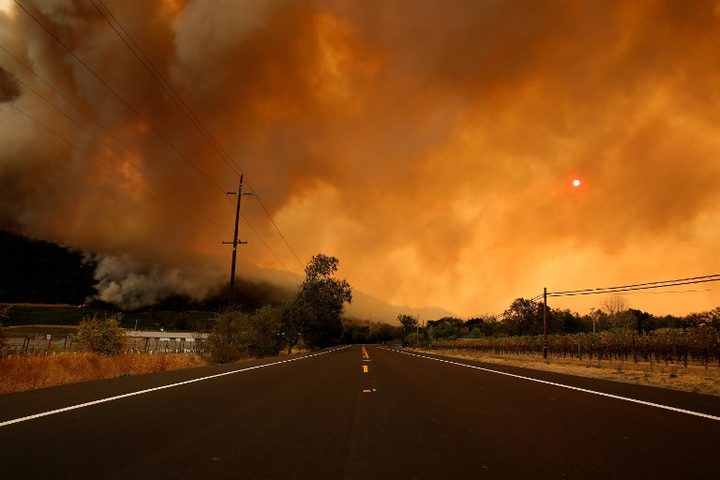 However, a National Institute of Water and Atmospheric Science principal climate scientist, Brett Mullan, said this year won't be a record in New Zealand, although temperatures will continue to climb here too.

"2017 won't be an extreme year for our temperatures. We started off fairly cold at the first half of the year but the last three months have been a record warm August, September, October, but still not enough to make 2017 a record," he said.

The World Meteorological Organization says 2015 and 2016 were the other two warmest years since records began in the 1800s. The WMO is predicting temperatures will be slightly lower than last year only because of the absence of the El Niño weather pattern.

An "extreme weather" report was released as the UN Climate Change Conference began in Bonn, the first major meeting since President Donald Trump announced plans to take the US out of the Paris agreement.

Patrica Spinoza from the UN Framework Convention on Climate Change told delegates time is running out.

The scientists argue that the long-term trend of warming driven by human activities continues unabated. They say many of the "extraordinary" weather events seen this year bear the hallmarks of climate change.

In 2017, extreme weather, droughts, and floods affected tens of millions of people around the world.

On the opening day of this year's key UN climate talks, researchers presented their annual State of the Global Climate report.

It follows hot on the heels of a greenhouse gases study, which found that concentrations of CO2 in the atmosphere were the highest on record.

While the new study only covers January to September, the WMO said the average global temperature was 1.1°C above the pre-industrial figure.

This is getting dangerously close to the 1.5° threshold that many island states feel temperatures must be kept under to ensure their survival. 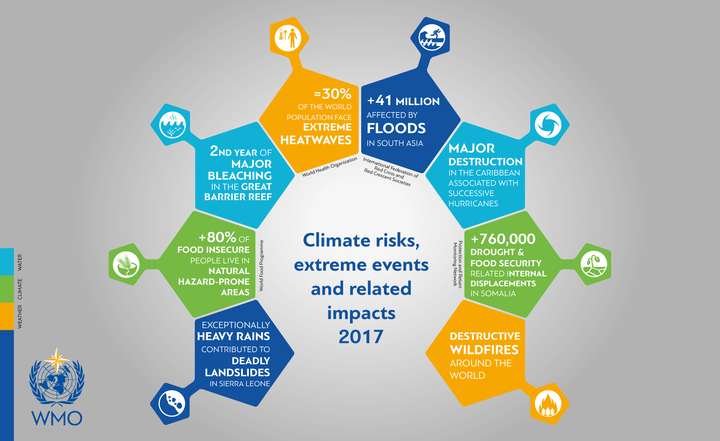 This is slightly down on 2016 when the El Niño weather phenomenon saw temperatures that were 0.56° above the average.

According to the WMO, this year vies with 2015 to be the second or third warmest yet recorded.

"The past three years have all been in the top three years in terms of temperature records. This is part of a long-term warming trend," said WMO Secretary-General Petteri Taalas.

"We have witnessed extraordinary weather, including temperatures topping 50° in Asia, record-breaking hurricanes in rapid succession in the Caribbean and Atlantic, (and) reaching as far as Ireland, devastating monsoon flooding affecting many millions of people and a relentless drought in East Africa.

"Many of these events - and detailed scientific studies will determine exactly how many - bear the tell-tale sign of climate change caused by increased greenhouse gas concentrations from human activities," he said.

Scientists will have to do attribution studies to clearly link specific events from 2017 to rising temperatures. But they believe the fingerprints of climate change are to be seen in events such as tropical cyclones, where the warmer seas can transfer more heat to the gathering storms and increased sea levels can make flooding more damaging.

The Accumulated Cyclone Energy Index, which measures the intensity and duration of these events, showed its highest ever monthly values in September this year.

It was also the first time that two Category 4 hurricanes made landfall in the same year in the US.

Hurricane Irma was a Category 5 storm for the longest period on record. Rain gauges in Nederland, Texas, recorded 1539mm, the largest ever recorded for a single event in the mainland US.

There were also significant flooding events with large loss of life in Sierra Leone, Nepal, India, Bangladesh and Peru among many others.

In contrast, droughts and heatwaves affected many parts of Africa and South America. In Somalia, more than half of cropland was impacted with herds reduced by 40-60 percent.

"This year saw a multitude of damaging weather extremes which is not uncommon but many of these events were made more severe by the sustained warming influence of increasing atmospheric greenhouse gas levels due to human activities," said Richard Allan, professor of climate science at the University of Reading, UK.

"An increased severity of weather extremes is expected in the decades ahead as Earth continues to heat up and it is only with the substantive cuts in greenhouse gas emissions required by the Paris climate agreement that we can avert much more potent and widespread damage to our societies and the ecosystems upon which they depend."