Hundreds of thousands of Rohingya people have fled Myanmar for Bangladesh, placing the country in an "untenable" position, Bangladesh envoy to the UN, Shameem Ahsan, says. 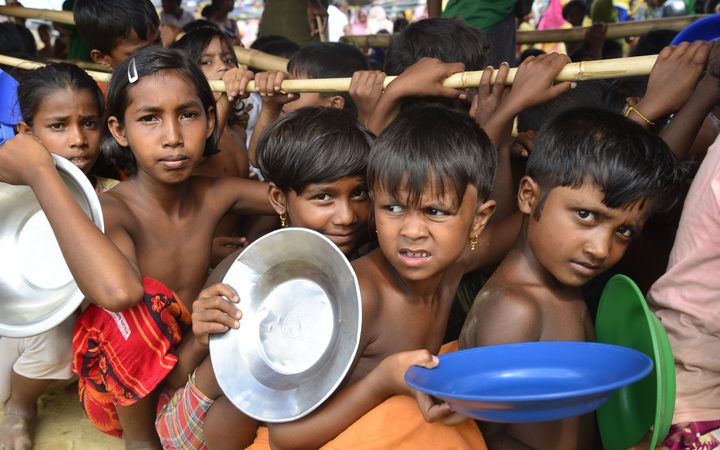 "Thousands still enter on a daily basis," he said.

About 600,000 have crossed the border since August, when militant attacks in Rakhine triggered an army offensive.

Mr Ahsan was speaking at a conference in Geneva to raise funds for victims.

Aid agencies have described conditions in Bangladeshi camps as appalling. They said there was a lack of clean water, shelter and food, and many children were traumatised.

"This is an untenable situation," Mr Ahsan said.

Aid was vital until Myanmar agreed to a "safe, dignified, voluntary return of its nationals back to their homes".

The Rohingya - most of whom are Muslims - have had a presence in Myanmar, mostly in Rakhine state, for generations.

The Myanmar government does not regard them as citizens, but as stateless immigrants from Bangladesh.

"This blatant denial of the ethnic identity of Rohingyas remains a stumbling block," Mr Ahsan said.

The UN has called the crisis a "textbook example of ethnic cleansing".

Those attacks led to a crackdown by Myanmar troops. The military said it was fighting insurgents but those who have fled said troops and Buddhists were conducting a brutal campaign to drive them out.

Before the latest influx, Bangladesh was home to 300,000 Rohingya who had escaped earlier outbreaks of violence in Rakhine.

The head of the UN refugee agency, Filippo Grandi, said the two countries had begun talks on repatriation but the necessary conditions did not yet exist for the return of the Rohingya.