Myanmar security forces have brutally driven out half a million Muslim Rohingya from northern Rakhine state, torching their homes, crops and villages to prevent them from returning, the UN human rights office says. 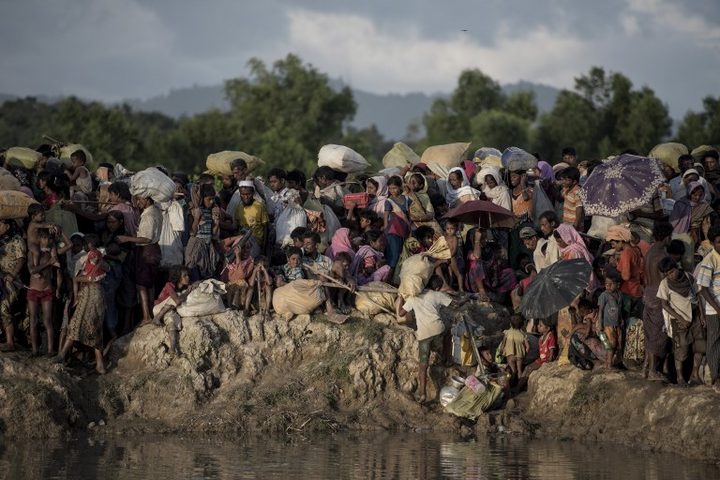 Rohingya refugees wait after crossing the Naf river from Myanmar into Bangladesh in Whaikhyang on October 9. Photo: AFP / FRED DUFOUR

A refugee crisis has been mounting since August when state authorities and the military cracked down on the impoverished coastal state, which is home to an estimated one million Rohingya. The military claimed to be fighting militant insurgents.

In a new report by the UN, the organisation said human rights abuses were carried out by Myanmar security forces in concert with armed Buddhists in Rakhine.

It highlighted a strategy to "instil deep and widespread fear and trauma" among the Rohingya - a minority Muslim population in a Buddhist country.

In a report based on 65 interviews with Rohingya who have arrived in Bangladesh in the past month, the report said that "clearance operations" had begun before insurgent attacks on police posts in August and included killings, torture and rape of children.

Jyoti Sanghera, head of the Asia and Pacific region of the UN human rights office, called on Myanmar de facto leader Aung San Suu Kyi to "stop the violence" and voiced fear that if the stateless Rohingya refugees return from Bangladesh they may be interned.

"If villages have been completely destroyed and livelihood possibilities have been destroyed, what we fear is that they may be incarcerated or detained in camps," she told a news briefing. 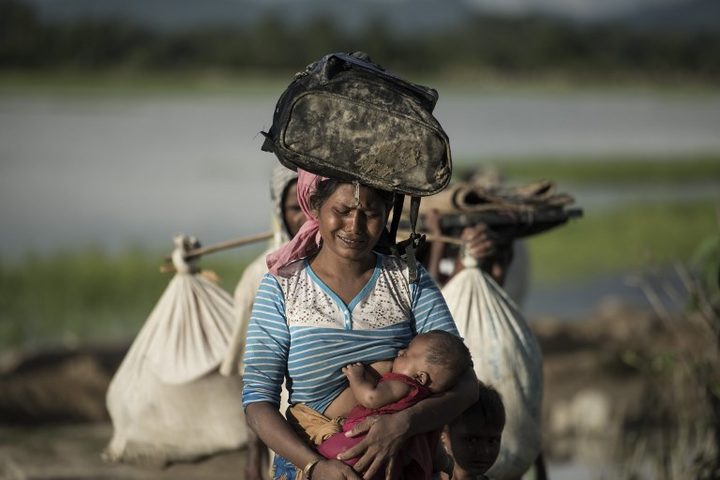 A Rohingya refugee walks while feeding a baby after crossing the Naf river from Myanmar into Bangladesh. Photo: AFP / FRED DUFOUR

UN High Commissioner for Human Rights Zeid Ra'ad al-Hussein - who has described the government operations as "a textbook example of ethnic cleansing" - said in a statement that the actions appeared to be "a cynical ploy to forcibly transfer large numbers of people without possibility of return".

"Credible information indicates that the Myanmar security forces purposely destroyed the property of the Rohingyas, scorched their dwellings and entire villages in northern Rakhine State, not only to drive the population out in droves but also to prevent the fleeing Rohingya victims from returning to their homes," the report said. 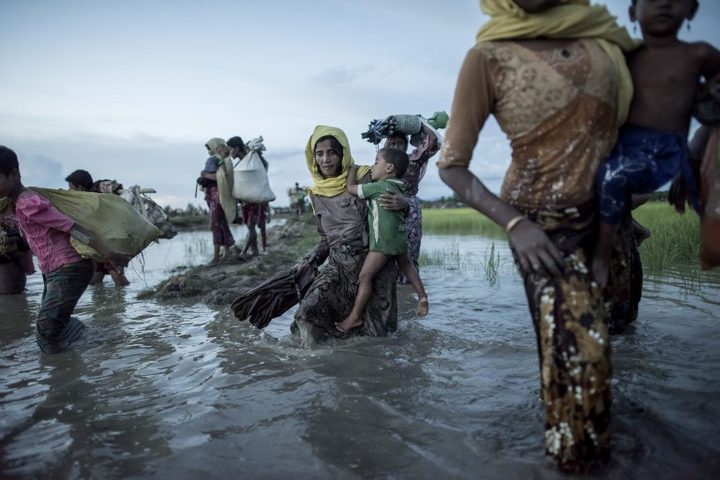 It said the destruction by security forces, often joined by mobs of armed Rakhine Buddhists, of houses, fields, food stocks, crops, and livestock made the possibility of Rohingya returning to normal lives in northern Rakhine "almost impossible".

The campaign was "well-organised, coordinated and systematic" and began with Rohingya men under 40 being arrested a month earlier, creating a "climate of fear and intimidation".

"We are not in a position to make a finding of genocide or not, but this should in no way detract from the seriousness of the situation which the Rohingya population is currently facing," said Thomas Hunecke, who led the team that went to Cox's Bazar, Bangladesh, to conduct interviews.

It was "highly likely" that Myanmar security forces planted landmines along the border in recent weeks to prevent Rohingya from returning, he said, citing doctors treating injuries.

Despite growing international condemnation of the crisis, the military campaign is popular in Buddhist-majority Myanmar, where there is little sympathy for the Rohingya, and for Muslims in general, and where Buddhist nationalism has surged.

Myanmar, on Tuesday, launched its first bid to improve relations between Buddhists and Muslims since the eruption of deadly violence inflamed the communal tension and triggered an exodus of some 520,000 Muslims to Bangladesh.

"Almost all testimonies indicated that people were shot at close range and in the back while they tried to flee in panic," the report said.

The report quoted a 12-year-old girl from Rathedaung township saying the security forces had surrounded her house and started shooting.

"It was a situation of panic - they shot my sister in front of me. She was only seven years old. She cried and told me to run. I tried to protect her and care for her, but we had no medical assistance on the hillside and she was bleeding so much that after one day she died. I buried her myself."

The girl did not know what happened to her mother and four brothers, nor her father jailed a month earlier.

On Wednesday, the UN said its current top official in Myanmar, Renata Lok-Dessallien, would finish her nearly four-year assignment at the end of October.