A predictable debate over gun control has reignited in the US as authorities search for the motive behind the country's worst mass shooting. 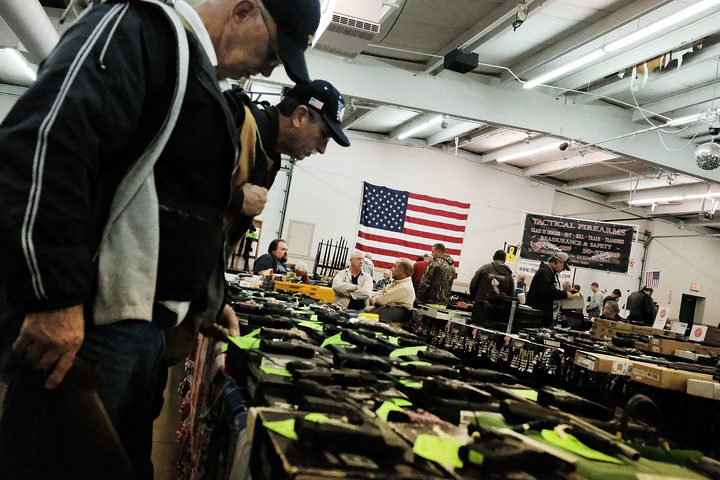 Prospective buyers at a gun show in Ohio, 2016 Photo: AFP

At least 59 people died, and more than 525 were wounded, when Stephen Paddock, 64, opened fire from the 32nd floor of a hotel on Las Vegas' strip.

Searches of the hotel room and Paddock's home turned up 42 weapons, thousands of bullets and explosives materials.

The White House has already rebuffed attempts to restart the political debate over gun control, with Donald Trump saying "we will be talking about gun laws as time goes by".

That admonishment cut no ice with gun control advocates, with democratic senators saying more must be done to prevent mass shootings.

Christopher Murphy, who is the senator for Connecticut where the Sandyhook massacre at an elementary school took place in 2012, said silence was no longer an option.

And Dick Durbin of Illinois said urgent action was needed.

However, Las Vegas Sun reporter Adam Candee, who has been covering the latest shooting, told RNZ's Morning Report discussion had already settled into a familiar cycle.

He doubted anything would change.

"If we did not accomplish any significant gun reform after the Sandyhook [shooting] in ... Connecticut, where 20 children and six adults were slaughtered in an elementary school, it's difficult to believe that this will be the incident that spurs a major change."

International Action Network on Small Arms spokesperson Rebecca Peters said the US was an outlier among industrialised countries, most of which had a gun licensing system and restrictions on how many and what type of weapons can be bought.

Gun laws differed state by state, "and even city by city", meaning places with stronger laws were easily undermined by neighbouring cities or states with weaker restrictions, she said.

Some people in the US were deliberately amassing arsenals of weapons, she said.

"There are a lot of people with peculiar attitudes towards government ... and people who are racial supremacists and are arming themselves to be involved in a civil war of some kind.

"That kind of idea, combined with a lack of regulation of guns, makes for a very lethal mix."

A former Australian politician said it was time for Americans to stand up to the powerful National Rifle Association and demand change.

Tim Fischer was Australia's deputy prime minister at the time of the 1996 Port Arthur massacre, when 35 people were killed and 23 wounded.

It also bought and destroyed more than 600,000 civilian-owned firearms. Australia has had no mass shootings in the 21 years since.

Mr Fischer said the government's actions were not popular.

"It was damn difficult. I was hung up in effigy ... in Gippsland. It was a pretty ugly few weeks."

But decades on, "we won the argument", he said.

He often spoke to people in the US about gun control and planned to take a "more brutal" approach now.

"They do have the numbers to stand up to the NRA. If they don't, let's call out their tourism, let's start issuing travel warnings about the USA," he said.

"The world deserves better from America."