When Jimmy's parents finally pulled their son out of the churning river, his body was already lifeless and limp, heavy in the arms of his father. 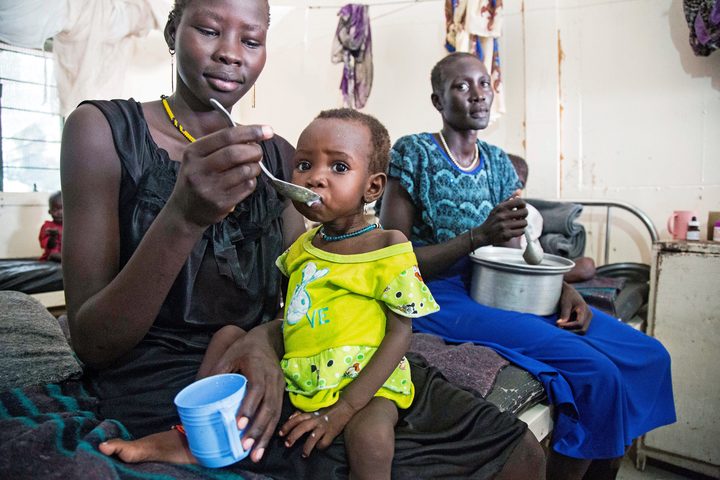 A mother gives food to her child with malnutrition in a clinic in Old Fangak, Jonglei state. Photo: AFP

But the eight-year-old's death - and that of three other boys - could have been easily prevented, had it not been for the price of drinking water in South Sudan's capital Juba costing a third of a family's monthly income.

The only school the family could afford was on the other side of the river, and, with no bridge, Jimmy had to wade through its turbulent waters each day.

"My brother drowned on his way to class," said his 18-year-old sister Mary Irene, who has just graduated from high school.

The pain of losing her brother this past May is still fresh.

"Jimmy was always scared of the raging stream, but facing his fear was the only way for him to receive an affordable education. My family struggles to survive. We spend most of our money on water."

South Sudan, home to the Nile, is not considered to be a water-scarce country. But civil war and hyperinflation have created a water crisis.

For an average family, spending a third of their earnings on water, the cost relative to income is six times greater than the internationally recognised five percent that the World Health Organization suggests families should be spending on water.

In Khor William, a hilly suburb of Juba with red mud roads and small brick houses almost hidden by grasses and maize plants, Jimmy's family is not the only one forced to make sacrifices since water prices began to rise in recent years.

Many families, especially government employees, haven't received their salaries lately and live on less than 1,000 South Sudanese Pounds a month G�� a mere $8 - even as prices rise with rampant inflation.

"We survive by selling homemade cake and bread. I haven't received my wages in several months. Water comes first... Some people have died because they couldn't afford medical treatment and others only eat maize flour and okra," said Rose Johnson, a social worker, mother of five and one of Mary's neighbours.

"When someone in our community falls ill, all we can do is hope and pray for the best."

Providing clean drinking water is complex in the lush, green country that won its independence in 2011 but descended into civil war two years later.

Water is available, but facilities and resources to purify it for drinking are lacking.

Pipe infrastructure built during British colonial rule in 1937 serves just 17 percent of Juba's permanent population of about 370,000 and is in need of repair and upgrading.

The rest of the city depends on supplies from almost 700 mostly privately owned water tankers, but in times of economic crisis, their prices have risen steeply.

A litre of petrol costs 700 South Sudanese Pounds ($5), but only limited imported supplies are available and the country's oil production has largely ground to a halt in the conflict.

Chlorine and alum for water treatment are imported by road from Uganda, a dangerous journey through an area prone to attacks and lootings, pushing up transport prices.

Aid agency Oxfam told the Thomson Reuters Foundation that in previous years tankers were operating on a profit margin of 45 percent, but those profits have turned to sharp losses.

"It's one of the reasons why an increasing number of tankers pump water straight from the river, instead of getting it from a treatment plant," said Oxfam's water and sanitation adviser Mariana Matoso.

"The businesses are scrambling to survive and some might therefore sell dirty water that they pumped for free."

After fighting erupted in Juba in July 2016, a Japanese-funded project to build the city's biggest water treatment plant was suspended. Work is yet to resume, while the water crisis deepens.

"Most kids here haven't been able to attend classes as their families can't afford it. Even government employees and doctors are struggling in our community."

As fighting rages across the country, more displaced people flock into the capital in search for safety. Over 2 million have been uprooted throughout the country, and tens of thousands have fled to Juba's U.N. protected sites.

A solution to water shortages seems far off.

Many households in Juba have cut their purchases of clean water by half, said Oxfam, living on less than five litres per person per day. The WHO states that a minimum of 20 litres is necessary for basic needs.

"People are at risk of cholera, diarrhoeal diseases as well as intestinal infections."

Children may be kept home from school in order to fetch water, he added.

Clutching a jug of water in her hand, its colour almost as yellow as her dress, Mary says that this is all her family drinks on a daily basis.

"Recently we have received dirty water from the tankers, but there is nothing we can do," she said. The cost is high. My brother paid for it with his life."