The commander of the UN force in South Sudan has been sacked by UN Secretary General Ban Ki-moon after a report said it had failed to protect civilians in July. 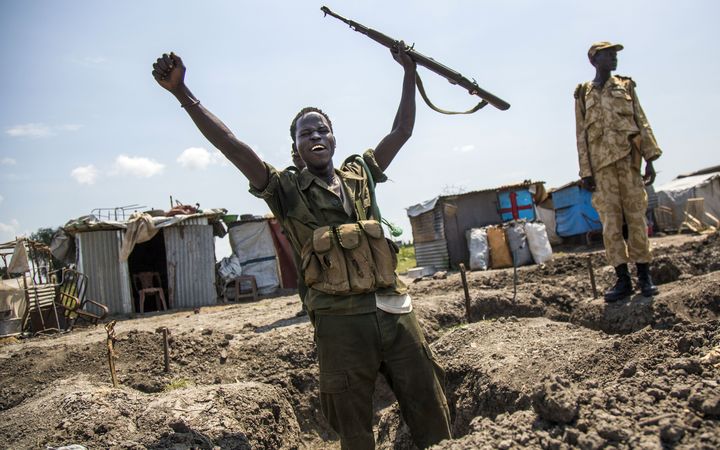 A soldier of the Sudan People Liberation Army celebrates while standing in a trench in Lelo, outside Malakal, in South Sudan. Photo: AFP

The report backed claims by aid workers that the UN troops refused to respond when government soldiers attacked an international aid compound in Juba.

In the fighting between the army and former rebels, a local journalist was killed and aid workers were raped.

The clashes derailed efforts to form a unity government and end the civil war.

The fighting began with clashes between President Salva Kiir's guards and bodyguards of the sacked Vice-President Riek Machar.

The independent special investigation into the violence on 8-11 July in South Sudan's capital was commissioned by the UN.

In three days of fighting, at least 73 people were killed, including more than 20 internally displaced people who had sought UN protection. Two peacekeepers also died.

Among the targets of the attack by government troops were a UN peacekeeping base, known as UN House, and the nearby Terrain Camp.

The report found that "a lack of leadership on the part of key senior mission (Unmiss) personnel culminated in a chaotic and ineffective response to the violence".

It said the peacekeepers "did not operate under a unified command, resulting in multiple and sometimes conflicting orders to the four troop contingents from China, Ethiopia, Nepal and India, and ultimately under-using the more than 1800 infantry troops at UN House".

"This included at least two instances in which the Chinese battalion abandoned some of its defensive positions," the document said.

It also said a Nepalese police unit had "performed inadequately" in its efforts stop looting.

During the attack on Terrain camp, the report said that "civilians were subjected to and witnessed gross human rights violations, including murder, intimidation, sexual violence and acts amounting to torture perpetrated by armed government soldiers".

Five survivors later described the horror of the attack in a special programme by BBC's Newsnight programme.

Both President Kiir's and Mr Machar's followers have been accused of perpetrating atrocities during the country's bitter civil conflict.

More than 2.5 million people in South Sudan have been displaced since the fighting first began in December 2013.