The youngest country in the world, South Sudan has its fifth anniversary of independence on 9 July, but since 2013 has descended into tribal-based civil war that has left thousands dead, millions of people displaced internally, and created huge food insecurity.

He said that there was much media and political attention in South Sudan five years ago when the nation was created, and despite the difficult task of bringing two conflicting tribes together to do so there had been a sense of hope at the time. 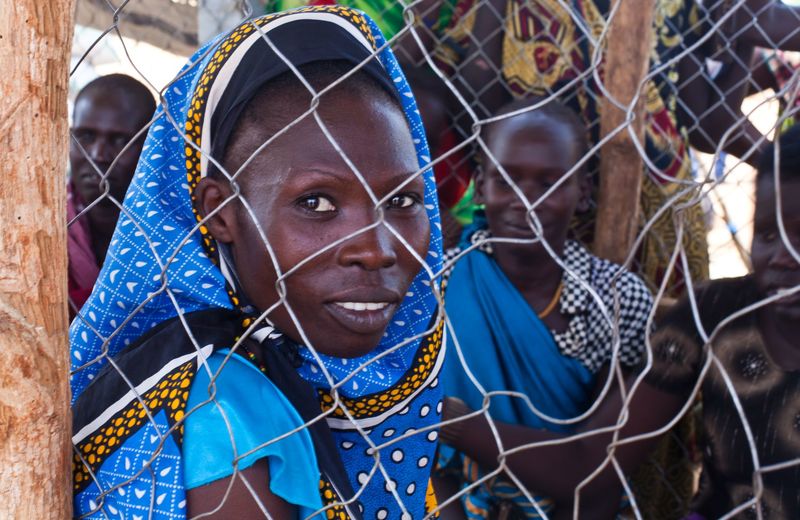 A woman at the Juba Protection of Civilians site waits to receive her monthly food rations. More than 200,000 people live in these sites around South Sudan, seeking protection from violence from the UN, and sustenance from NGOs. As many as 5.3 million people could face severe food insecurity this summer in South Sudan, because of conflict, poor harvests, and the mass displacement of people. 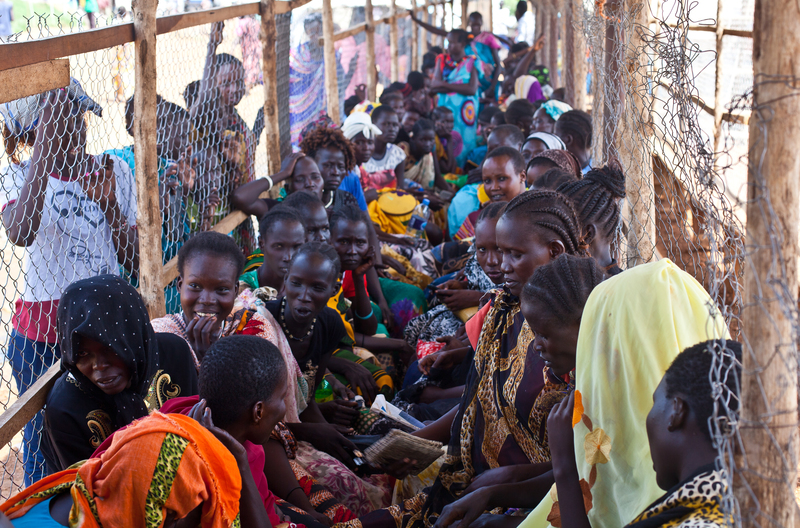 Women at the Juba POC line to receive their monthly food rations. Each month each resident of the camp receives a vital supply of food, and vouchers to use at the local market through a sophisticated ration and distribution system. 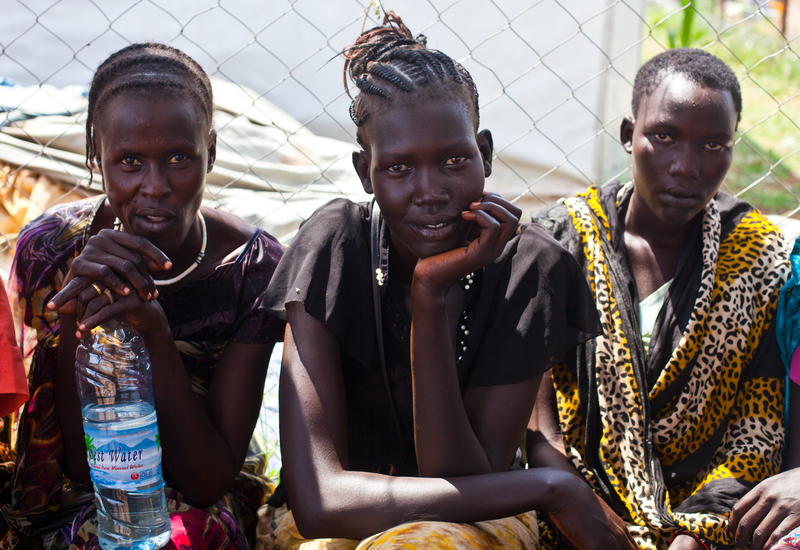 World Vision is one of the pioneering organisations to substitute portions of monthly rations with food vouchers to use at local markets inside the camps. Each resident receives 160 SSP a month to spend on eight different food commodities, providing variety, empowerment and a more balanced diet for the camp’s residents, who often feel desperately reliant on aid agencies for survival. 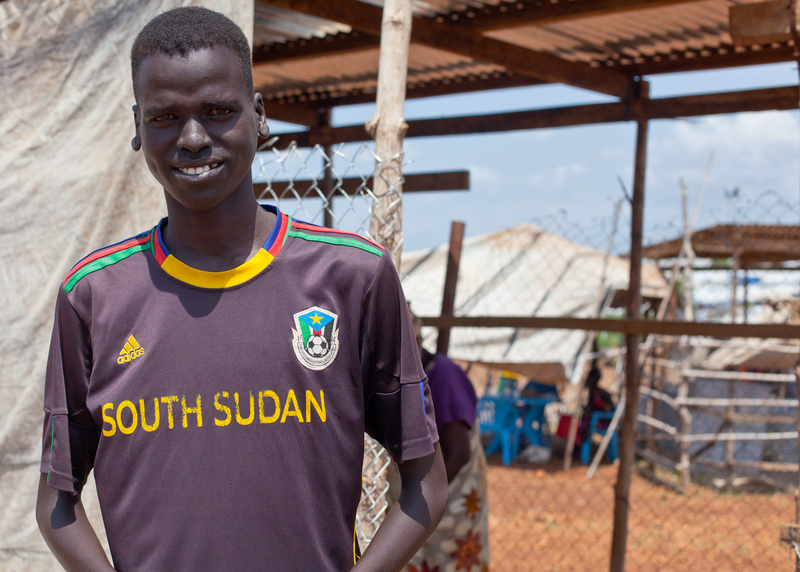 John Madout is 22 and he loves football. But the lanky midfielder doesn’t get much chance to play anymore since he was forced from his home in 2013 when fighting broke out in South Sudan. He has been living with more than 30,000 others in the Protection of Civilian site in Juba, where he seeks safety behind the walls and guards of the UN base. As a young man, he hasn’t left the site for three years for fear of ethnic violence. 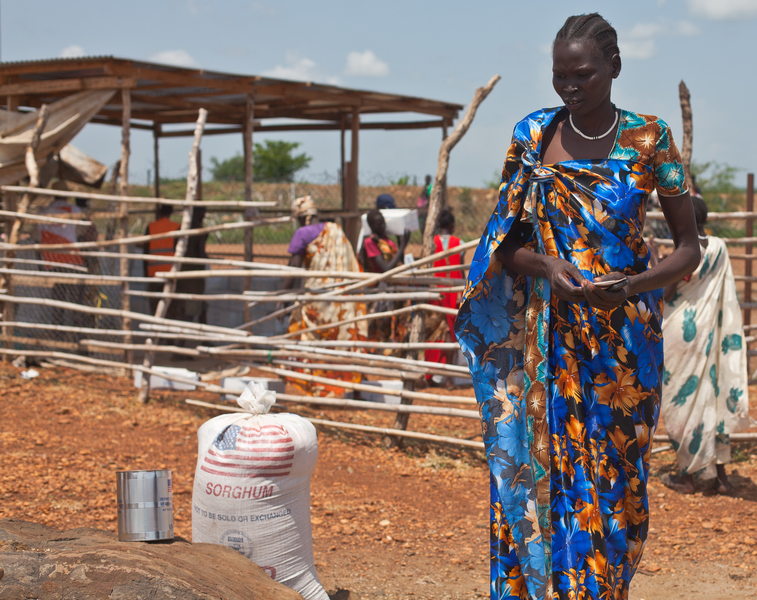 World Vision partners with the WFP to distribute food in the JubaPOC. Each month World Vision distributes cereals, pulses, vegetable oil, salt, and fortified blended food for malnourished children, to the residents of the camp. The rations are scientifically broken down into nutritional needs providing essential amounts of carbohydrates, protein, fat and iodine. 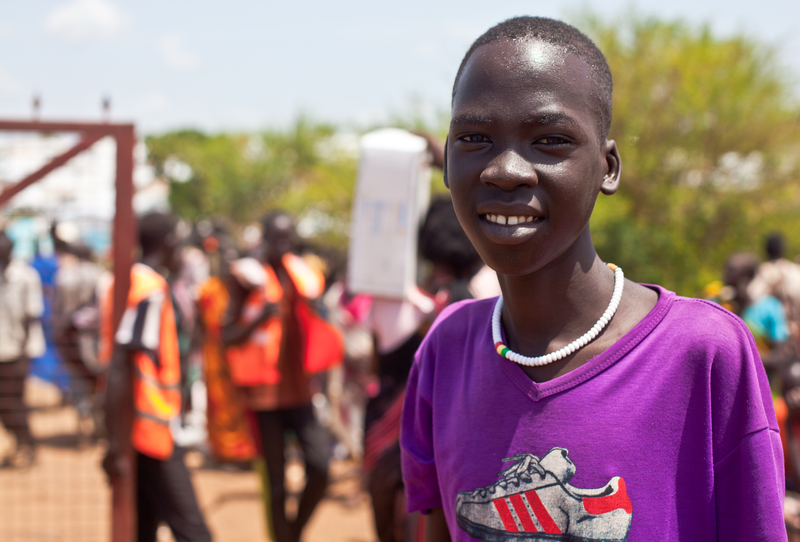 Just 16 years old David Boum has seen violence that no children should witness. He told us of a civil war that had degraded into cannibalism, and having seen a pregnant woman murdered. With his four sisters and one brother, he ran for his life when fighting came to his home in 2013. I met David helping his mother with the collection of their monthly rations. They barely have enough to survive. 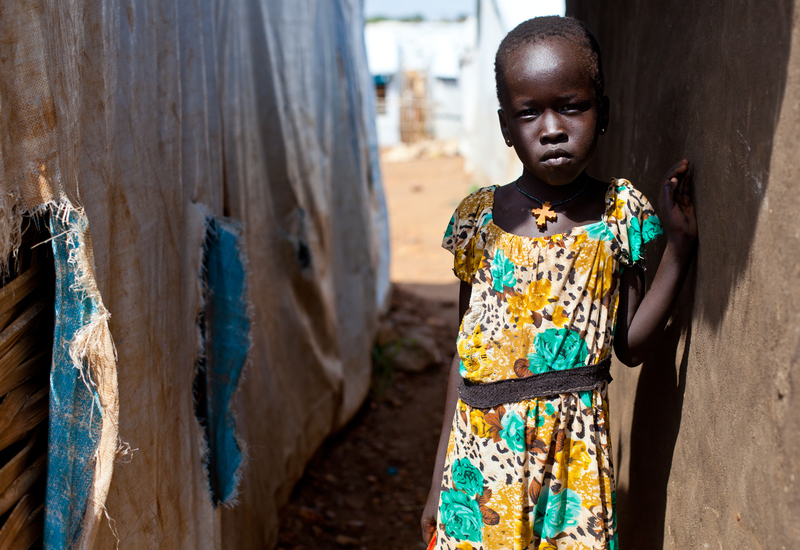 This girl is part of an extended family of more than 35 living in terrible conditions at the Juba POC. The family was crowded together in a group of tents pieced together with rusted sheets of corrugated iron over an earth floor. There is not enough food to feed the large family, and the children have become sick many times in the camp full of disease. 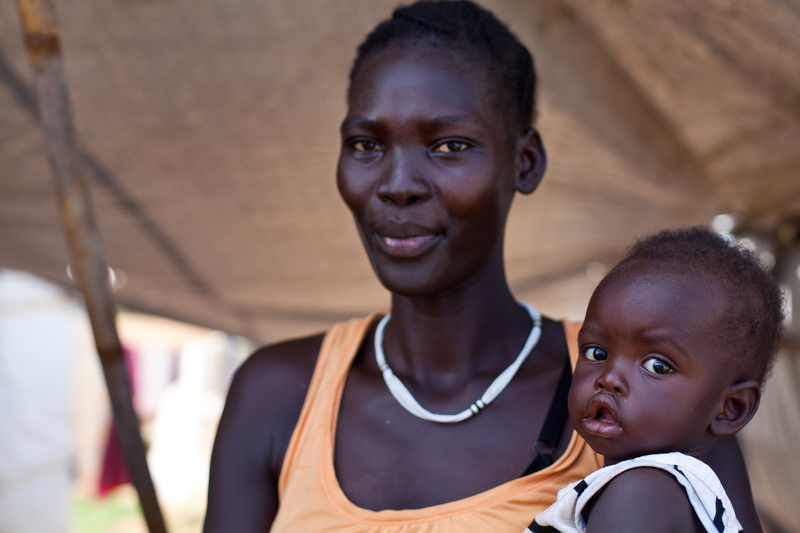 Every night mother of four Bejien Geil lies awake in fear. She still fears that armed men will come at night and take her family. Three years ago they killed her three nephews. She was forced to flee her once comfortable life and now she lives in squalor, surrounded by disease and starvation in the POC site in Juba. She does not have enough food, and the children are constantly sick living in the dense, dirty environment of the camp. 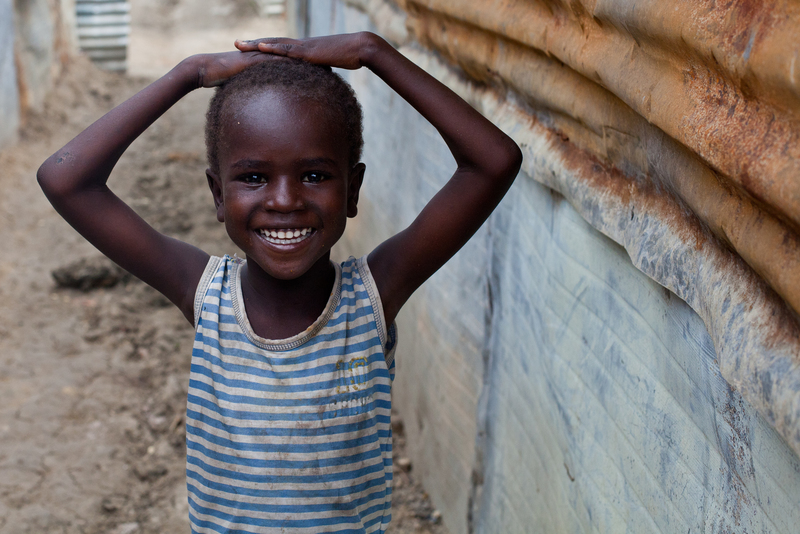 Children make up nearly 60 per cent of the 40,000 population at the Malakal POC; the most vulnerable have been the most affected by the crisis. More than 2.3 million people – one in every five people in South Sudan - have been forced to flee their homes since the conflict began, over half are estimated to be children. Nearly one in every three schools in South Sudan has been destroyed, damaged, occupied or closed. 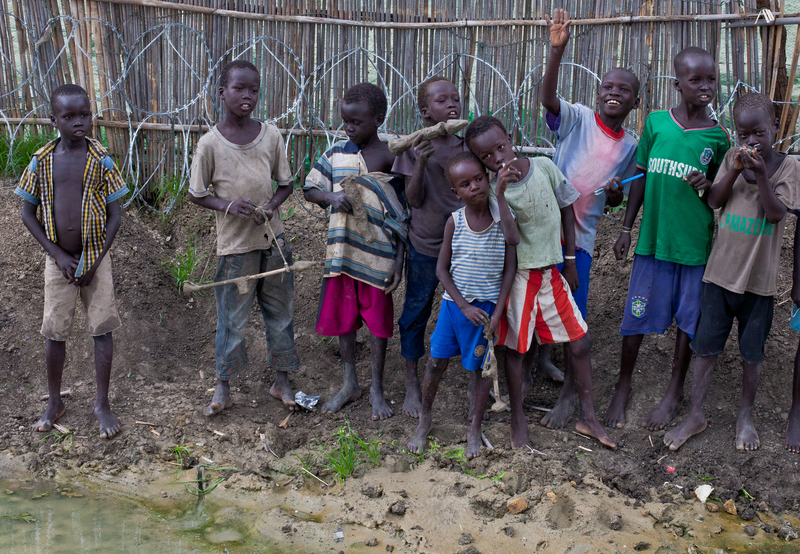 These young boys in the Malakal POC site had sculpted weapons out of clay. These children have grown up around violence and guns. Children are often left with little choice but to take up arms or die. World Vision works with children to try and break the cycle of violence in South Sudan, and rehabilitate those who have witnessed extreme violence. 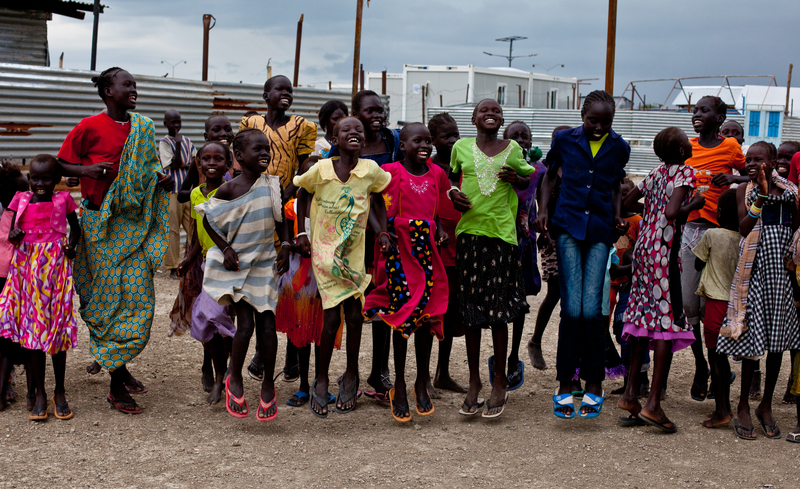 At the World Vision school in Malakal POC, children get essential respite from the violence they have seen, and their desperate day to day existence. This intervention in the lives of these children is essential to prevent the cycle of violence that has damaged the country so badly. 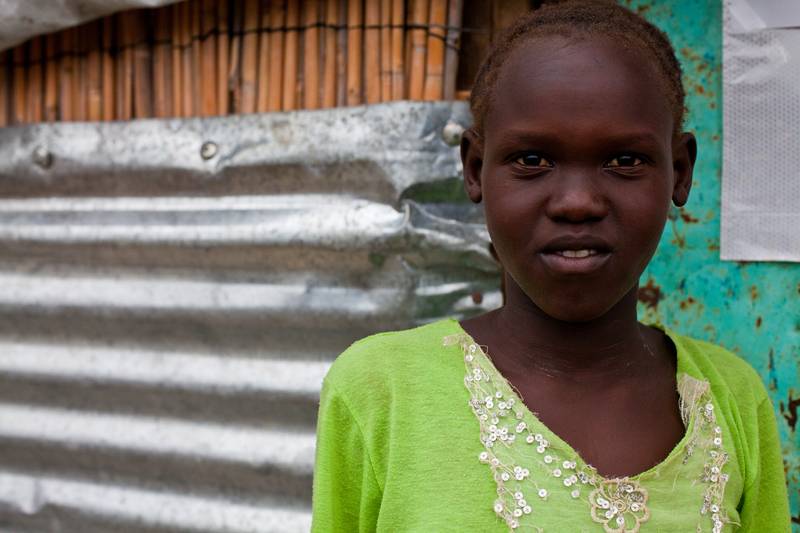 Thirteen-year-old Chubath Fulkhor saw her friends shot, and her father’s friend killed in the city centre. “I saw bad things in the city, people were killed and burned inside their houses” she says. At the World Vision school she has a chance to be a child again. She is desperate that the school remain open. Here she is continuing her education and experiencing a life that can be defined by fun and happiness rather than violence and death. 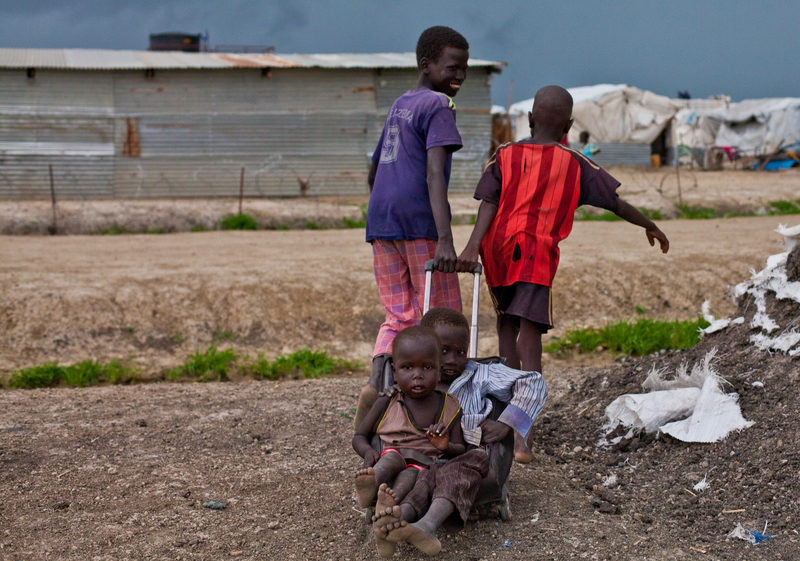 Children in the Malakal POC make use of an abandoned suitcase. They have very little, one set of clothes, few toys and not enough food. Yet they are so resilient and are able to find joy in the smallest things. They are the future of South Sudan. 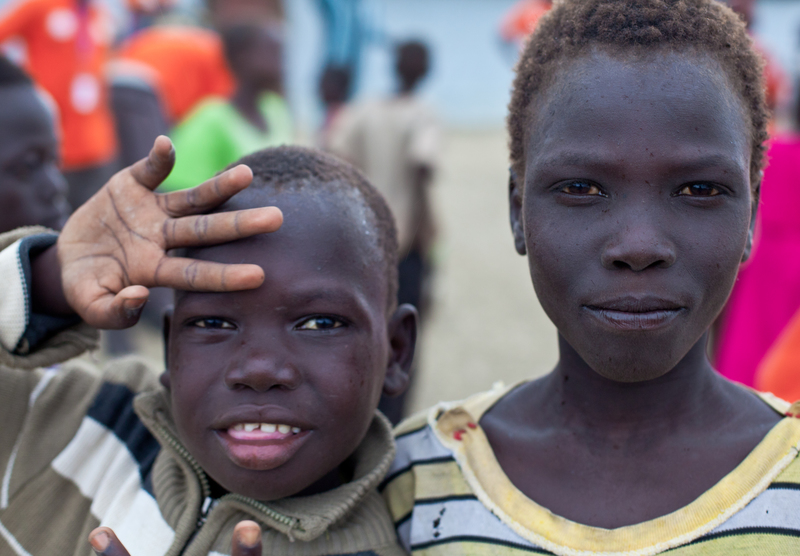 When I told 12-year-old John Juma that I was from New Zealand, laughing he quickly responded: “that place is at the end of the world!” It was impossible to stop the young man from smiling. He was desperate to know about my life, and my country. I was constantly blown away by the bravery and resilience of South Sudan’s children. 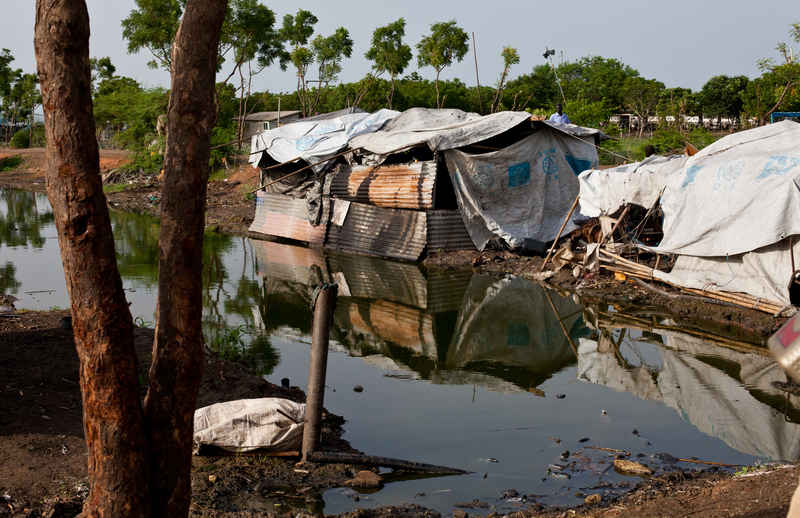 More than 40,000 people live in the POC site on the UN base. Conditions are horrific and those living here face incredible hardship. The residents live in makeshift shelters in areas that quickly becomes a swamp after rain. Overcrowding, mud and poor sanitation spreads disease quickly. Children are the most vulnerable. 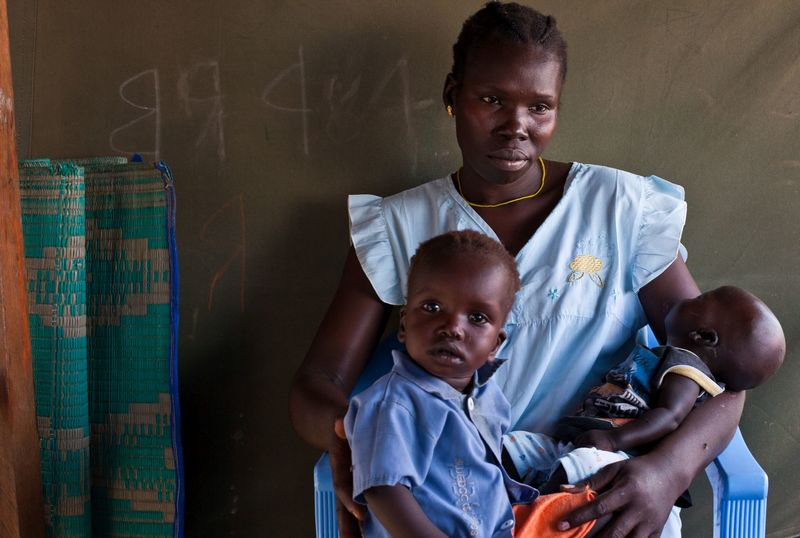 Emmanuel is just four months old and was found abandoned in a toilet and suffering from severe malnutrition in the village of Wau Shilluk that runs along the western bank of the Nile in the north of South Sudan. The village took in thousands of people displaced by fighting in Malakal on the other side of the river. 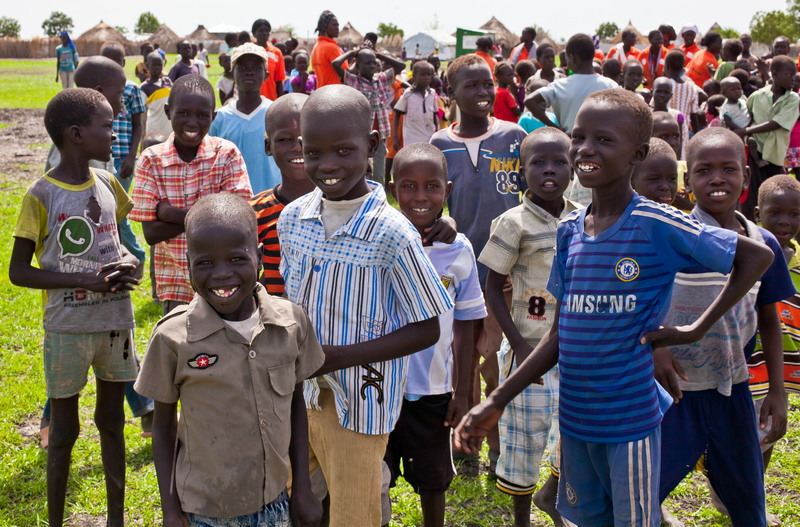 At a World Vision Child Friendly Space in the village of Kodok, Upper Nile, children play, sing and dance. Here they have a chance to restart their education and receive psychosocial support for the terrible violence they have witnessed. An estimated one million children are believed to be in psychosocial distress. 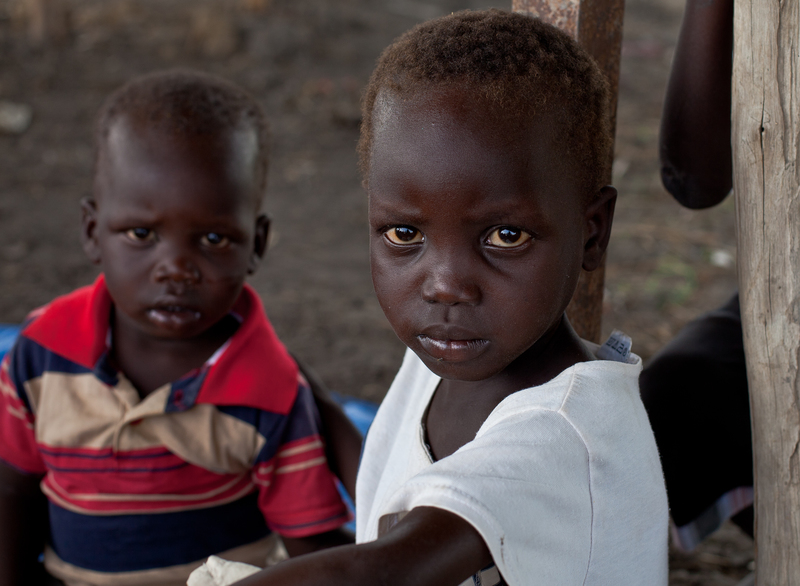 More than 686,200 children under age 5 are estimated to be acutely malnourished, including more than 231,300 who are severely malnourished. Over 10,000 children have been registered as unaccompanied, separated or missing. 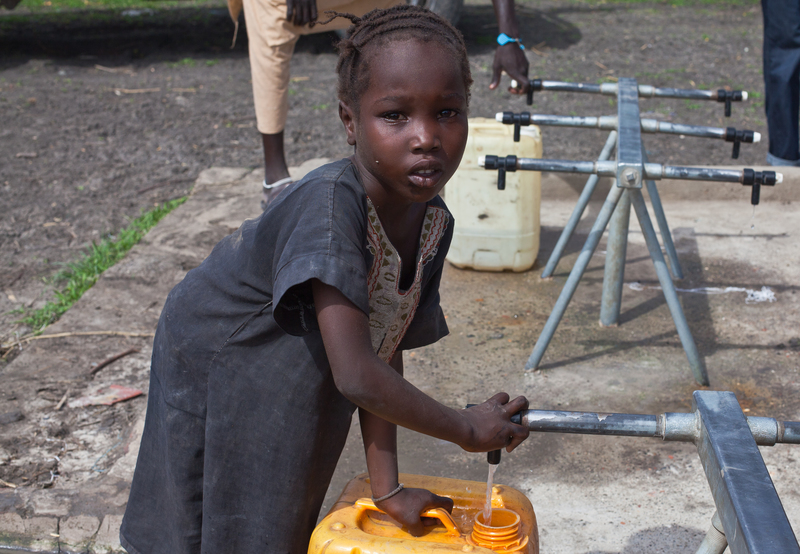 Last year in the village of Kodok, Upper Nile, there was an outbreak of cholera last year because of a water shortage. World Vision has built an emergency water system that turns the filthy water from the Nile into clean drinking water. The system takes 30,000 litres of water from the Nile into a holding tank, it is then purified. The water is then pumped into the community. 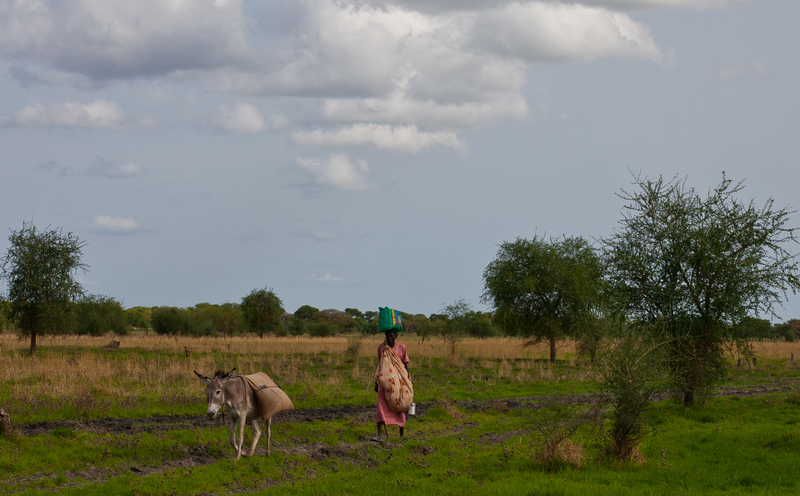 South Sudan’s communities are easily cut off by weather and violence. The 60km between Wau Shilluk and Kodok takes 2.5 hours to travel in good weather, and impassable when wet. The people have difficulty accessing food and water. At independence South Sudan was not just the newest, but one of the poorest and least developed nations in the world, many people still live in traditional tukuls. For decades of civil war, the politically dominant north had subdued the south’s development and progress, and tried to wrestle the benefits of valuable natural resources, including oil, from the south. 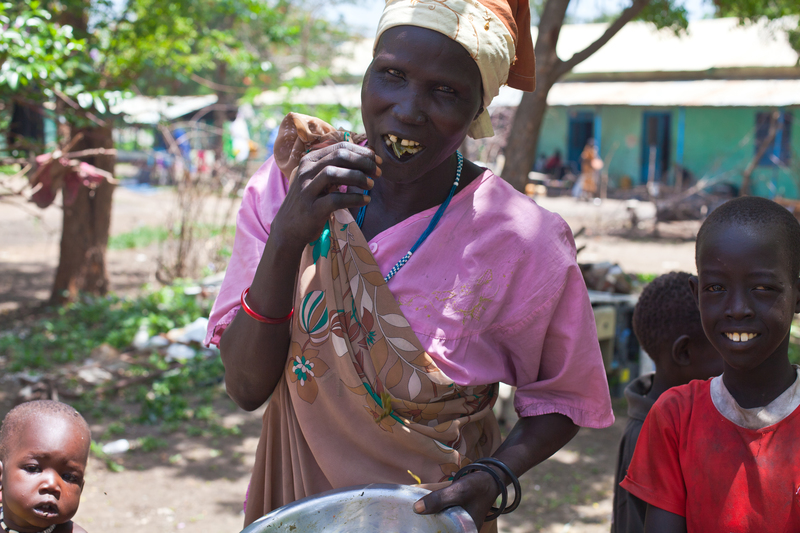 Even after they were forced to shelter at the POC site in Malakal, further violence meant this community is now living in a burnt out school in the town. They have so little food they have been forced to eat leaves. 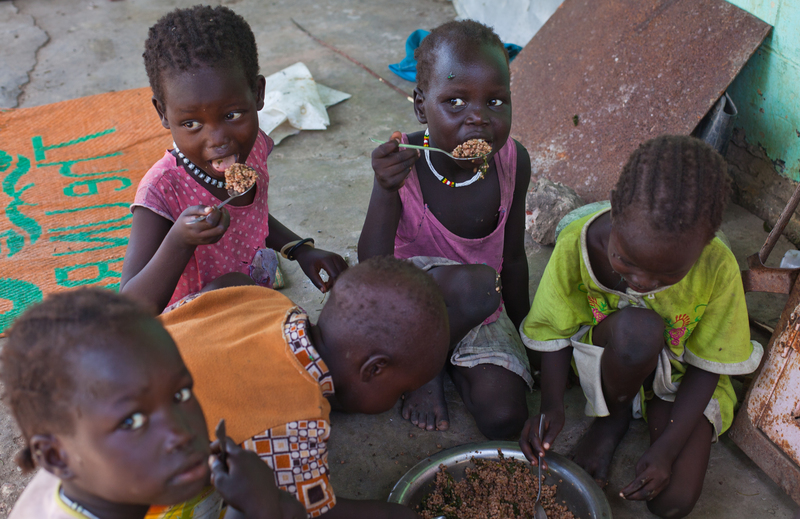 These children were living in a school destroyed by the fighting in Malakal. They were eating a mixture of grain and cooked leaves. 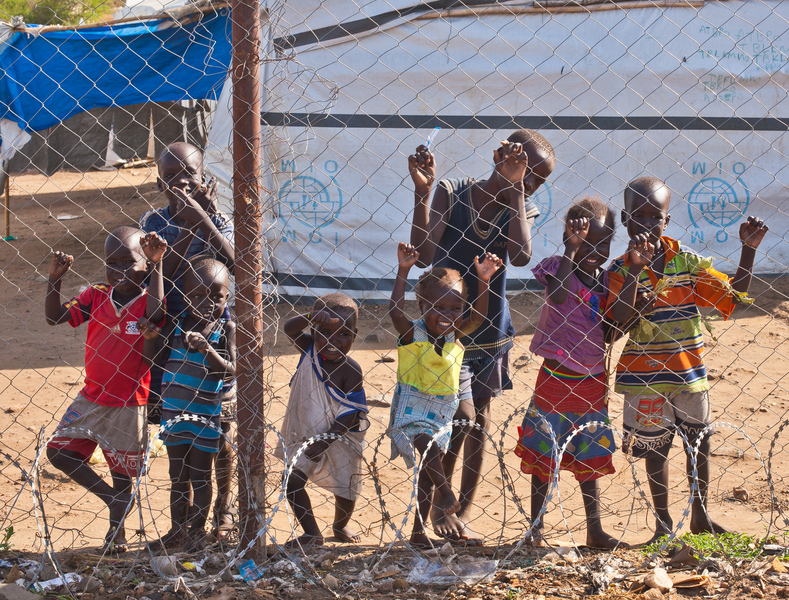 Groups of children wait outside the food distribution site at the Juba Protection of Civilian site. Children are the most vulnerable in this crisis that is threatening a generation of South Sudan. More than 686,200 children under age 5 are estimated to be acutely malnourished, including more than 231,300 who are severely malnourished. 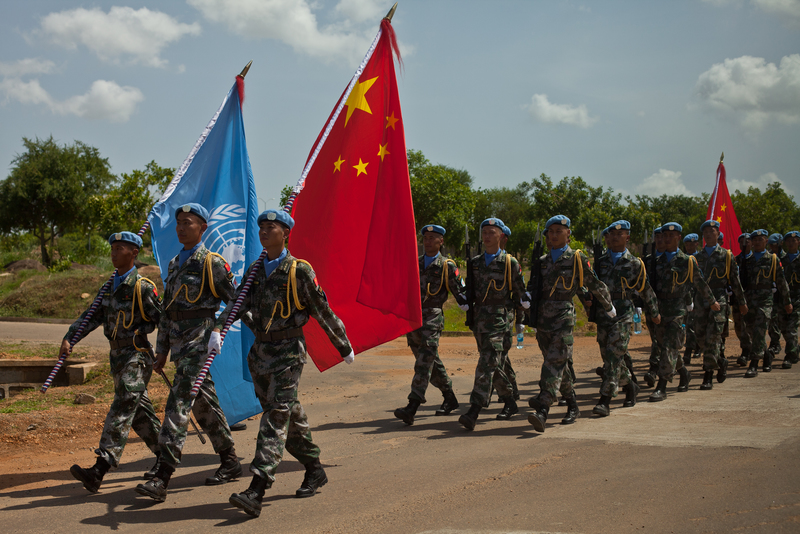 However, South Sudan now seemed almost like a forgotten conflict, with displacement of nearly 2.5 million people and the fact that hundreds of thousands of children's education had stopped.

"Without education they're going to have little choice but to engage in the conflict. Child malnutrition levels are affecting upwards of 500,000 children under five and this leads directly to stunted development and death in many cases.

"The levels of mortality in childbirth is extreme."

He visited, as well as a similar facility in Juba, Malakal city's Protection of Civilians centre, where World Vision was operating and which was subject to an attack by government soldiers on 17 and 18 February.

"City is a bit of a euphemism at this point," he said.

"And I've never seen anything like these places where people have chosen to live in such destitution for their own protection - but that cannot be guaranteed in any way.

"It really upset the people as well because they had come to these places to seek protection, they had fled their villages and their livelihoods in the hope that they would at least have safety and the fact that even that was so hard to find in South Sudan was really alarming."

He said the situation Juba had really deteriorated and over the last two nights there had been fighting with the UN coming under attack.

"The security in the entire country is just incredibly fragile."

"You could feel the nervousness wherever you went - it was quite unnerving to see armed people everywhere.

While many of the battles were ostensibly on behalf of either the President Salva Kiir Mayardit or the Vice President James Wani Igga, the situation was more complicated than that.

"It's not as simple as being defined by troops loyal to the president or the vice president, that comes down to both tribal conflicts, intercommunal conflicts, desperation to survive as environmental conditions destroy livelihoods and cattle is stolen - and in a big way I think it shows the difficulty of building a nation in a place like South Sudan."