Donald Trump has escalated his threats against North Korea over its nuclear challenge, saying the US would "totally destroy" the country if forced to defend itself or its allies. 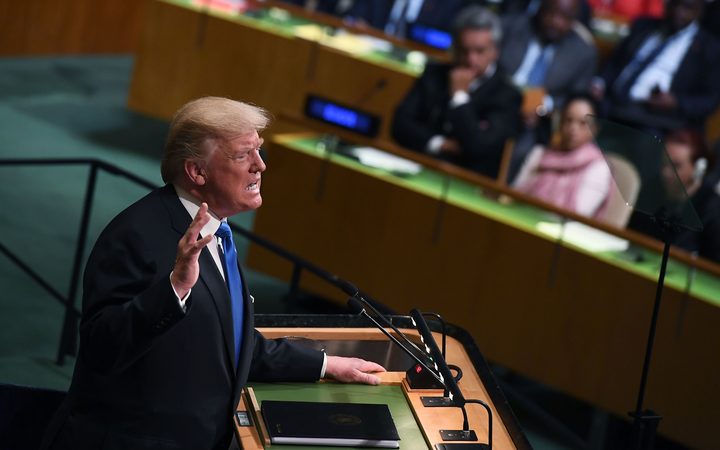 Donald Trump at the UN: The US president used his speech to mock and threaten the North Korean leader. Photo: AFP

In his debut speech to the UN General Assembly, the US president mocked North Korea's leader, Kim Jong-un, saying: "Rocket man is on a suicide mission."

North Korea has tested nuclear bombs and missiles in defiance of the UN.

"The United States has great strength and patience, but if it is forced to defend itself or its allies, we will have no choice but to totally destroy North Korea," Mr Trump told the 193-member world body, sticking closely to a script.

His remarks rattled the leaders gathered before him in the UN General Assembly hall, where minutes earlier UN Secretary-General Antonio Guterres had appealed for statesmanship.

Loud startled murmurs filled the hall, and one man in the audience covered his face with his hands shortly after Mr Trump made his "totally destroy" comment.

Mr Trump's most direct military threat to attack North Korea was his latest expression of concern about Pyongyang's repeated launching of ballistic missiles over Japan and underground nuclear tests.

The comments reflect what his advisers say is concern about North Korea's advances in missile technology and the few means available for a peaceful response without China's help.

'Wrong speech at the wrong time'

Swedish Foreign Minister Margot Wallstrom told the BBC it was "the wrong speech, at the wrong time, to the wrong audience".

Mr Trump's rhetoric, with the bare-knuckled style he used to win the election last November, was in contrast to the comments of some of his own Cabinet members who have stated a preference for a diplomatic solution.

The American leader said Iran was a "corrupt dictatorship" which was intent on destabilising the Middle East.

He called on the government in Tehran to cease supporting terrorism and again criticised the Obama-era international agreement over Iran's nuclear programme, which he called an embarrassment.

He also criticised the Cuban government.

Parts of the world 'going to hell'

"Major portions of the world are in conflict and some in fact are going to hell," he said.

His strongest words were directed at North Korea. He urged the United Nations member states to work together to isolate the Kim government until it ceases its "hostile" behaviour.

In what may have been a veiled prod at China, the North's major trading partner, Mr Trump said: "It is an outrage that some nations would not only trade with such a regime but would arm, supply and financially support a country that imperils the world with nuclear conflict."

Shortly before Mr Trump's speech, Mr Guterres appealed for statesmanship to avoid war with North Korea, saying: "We must not sleepwalk our way into war."

The UN Security Council has unanimously imposed nine rounds of sanctions on North Korea since 2006 and Mr Guterres appealed for that 15-member body to maintain its unity.

Israeli Prime Minister Benjamin Netanyahu, a former UN ambassador due to address the world body later on Tuesday, said in a statement: "In over 30 years in my experience with the UN, I never heard a bolder or more courageous speech."

Reaction around the United States was mixed. Mitt Romney, the 2012 Republican presidential nominee, tweeted that Mr Trump, a fellow Republican, "gave a strong and needed challenge" to UN members to confront global challenges.

But Democrat Ed Markey of the US Senate Foreign Relations Committee denounced Mr Trump's remarks in a CNN interview, saying the president had yet to exhaust his other options in encouraging Pyongyang to negotiate.

"He engages in escalatory language that only induces further paranoia in Kim," Mr Markey said. "The least we should be able to say is that we tried, we really tried, to avoid a nuclear showdown between our two countries."