The United Nations Security Council has strongly condemned North Korea for carrying out what it called a highly provocative missile test. 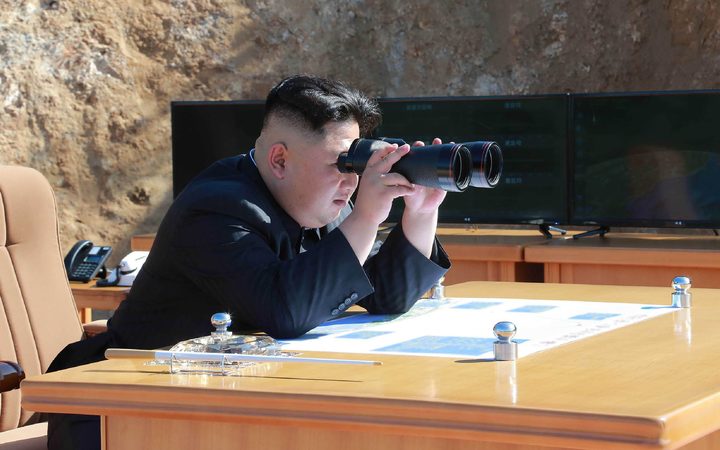 Kim Jong-Un inspecting the test-fire of an earlier intercontinental ballistic missile at an undisclosed location. Photo: AFP PHOTO/KCNA VIA KNS

After meeting in an emergency session, the United States, China, and Russia were united in their opposition to North Korea for firing a missilie over the Japanese island of Hokkaido.

In a joint statement, members of the council appealed for North Korea to take part in a peace process and reduce tension on the Korean Peninsula.

There was no mention in the UN statement of further sanctions.

Last week, the Security Council agreed on fresh economic sanctions, which the US estimates will cut trade with North Korea by 90 per cent.

The latest missile test by North Korea, its furthest-reaching yet, has split world powers who had united behind the new sanctions.

US President Donald Trump said he was more confident than ever of America's military options, should one be needed.

China earlier accused the US of shirking its responsibilities, while Russia called US rhetoric "aggressive".

The missile was fired over Japan and reached an altitude of about 770km, travelling 3700km past the northernmost island of Hokkaido before landing in the sea, South Korea's military said.

The missile had the capacity to reach the US territory of Guam and experts say it is the furthest any North Korean ballistic missile has ever travelled above ground.

The Security Council convened an emergency meeting, in which members unanimously condemned the missile launch as "highly provocative" - coming as it did after Pyongyang's nuclear bomb test on 3 September.

US envoy to the UN Nikki Haley had earlier played down the possibility of further punitive action, saying fresh economic sanctions agreed by the council on Monday that restricted oil imports and banned textile exports would cut trade with North Korea by 90 percent.

President Donald Trump is due to address the UN next week, as well as meet the Japanese and South Korean leaders.

The missile test has been widely condemned, with Japanese Prime Minister Shinzo Abe saying his country would "never tolerate" such "dangerous provocative action".

President Trump said North Korea had "once again shown its utter contempt for its neighbours, and the entire world community", but that he felt more confident than ever that the US was ready should a military option be needed.

But world powers were divided over how best to respond.

President Trump's National Security Adviser HR McMaster earlier said the US was quickly running out of patience for diplomatic solutions, adding: "We've been kicking the can down the road, and we're out of road."

He confirmed that there was a military option, but it was not the president's preferred choice.

But Russia's ambassador to the UN Vasilly Nebenzia urged caution, saying: "We think that threats, tests, launches, and mutual threats in fact should be stopped, and that we should engage in meaningful negotiations."

US Secretary of State Rex Tillerson said China, which supplies the North with most of its oil, and Russia, which was the largest employer of North Korean forced labour, should take direct actions to rein in Pyongyang.

China foreign ministry spokeswoman Hua Chunying insisted her country was not the "focal point of the conflict" and directed the following remarks at the US and South Korea: "Any attempt to wash their hands of the issue is irresponsible and unhelpful for resolving the issue."