North Korea says it has successfully tested a nuclear weapon that could be loaded onto a long-range missile. 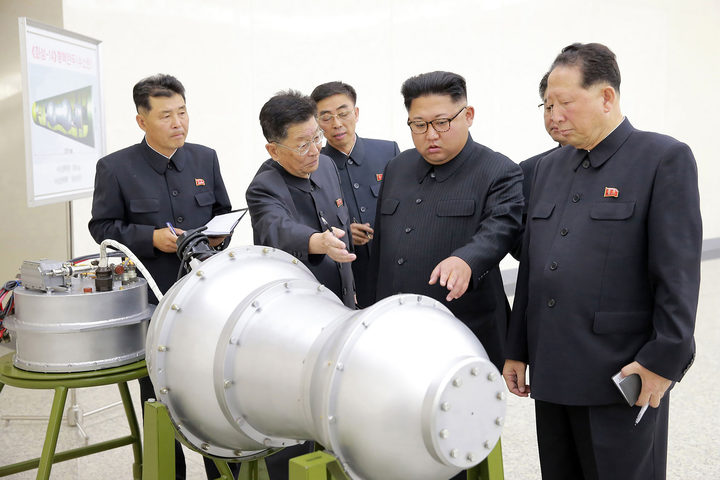 The secretive communist state said its sixth nuclear test was a "perfect success", hours after seismologists had detected an earth tremor.

Pyongyang said it had tested a hydrogen bomb - a device many times more powerful than an atomic bomb.

Analysts say the claims should be treated with caution, but its nuclear capability is clearly advancing.

North Korea last carried out a nuclear test in September 2016. It has defied UN sanctions and international pressure to develop nuclear weapons and to test missiles which could potentially reach the mainland US.

The "artificial quake" was 9.8 times more powerful than the tremor from the North's fifth test, the state weather agency said.

It came hours after Pyongyang said it had miniaturised a hydrogen bomb for use on a long-range missile, and North Korean leader Kim Jong-un was pictured with what state media said was a new type of hydrogen bomb. State media said the device could be loaded on to a ballistic missile.

What does the test tell us?

In a report on Sunday, the North's state news agency KCNA said Kim Jong-un had visited scientists at the nuclear weapons institute and "guided the work for nuclear weaponisation".

The North has previously claimed to have miniaturised a nuclear weapon, but experts have cast doubt on this. There is also scepticism about the North's claims to have developed a hydrogen bomb.

However, this does appears to be the biggest and most successful nuclear test by North Korea to date - and the messaging is clear. North Korea wants to demonstrate it knows what makes a credible nuclear warhead.

Nuclear weapons expert Catherine Dill told the BBC it was not yet clear exactly what nuclear weapon design was tested.

"But based on the seismic signature, the yield of this test definitely is an order of magnitude higher than the yields of the previous tests."

Current information did not definitively indicate that a thermonuclear weapon had been tested "but it appears to be a likely possibility at this point", she said.

Hydrogen bombs use fusion - the merging of atoms - to unleash huge amounts of energy, whereas atomic bombs use nuclear fission, or the splitting of atoms.

North Korea "has ignored the international community's widespread opposition, again carrying out a nuclear test. China's government expresses resolute opposition and strong condemnation toward this," the foreign ministry said in a statement.

And Japan's Chief Cabinet Secretary, Yoshihide Suga, also condemned the test and said sanctions against North Korea should include restrictions on the trade of oil products.

Mr Brownlee said that North Korea had again demonstrated its complete disregard for its obligations under United Nations Security Council resolutions and for international norms against nuclear testing.

He said New Zealand would join the international community in considering what measures can be taken.

The head of the International Atomic Energy Agency, the global nuclear watchdog, said in a statement that North Korea's latest nuclear test was "an extremely regrettable act".

Yukiya Amano added: "This new test, which follows the two tests last year and is the sixth since 2006, is in complete disregard of the repeated demands of the international community."

How did news of the test emerge?

The first suggestion that this was to be a far from normal Sunday in the region came when seismologists' equipment started picking up readings of an earth tremor in the area where North Korea has conducted nuclear tests before.

Initial reports from the US Geological Survey put the tremor at 5.6 magnitude with a depth of 10km but this was later upgraded to 6.3 magnitude at 0km.

Then Japanese Foreign Minister Taro Kono said there was no doubt this was North Korea's sixth nuclear test.

Finally, in a radio broadcast that had been trailed as a "major announcement", North Korean state media confirmed this was no earthquake.