A third Australian politician who has discovered he holds dual citizenship is seeking legal advice on whether he has to step down entirely as an MP. 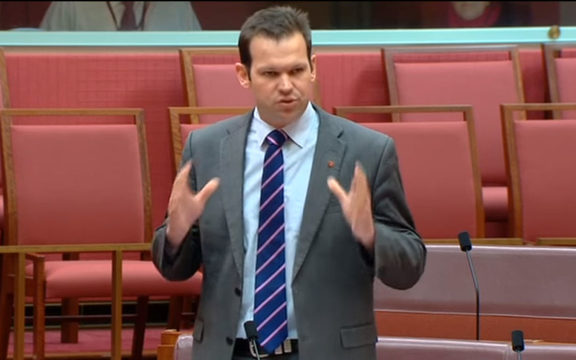 Resources Minister Matt Canavan has stepped down from the Australian Cabinet, making him the third politician to resign a position this month after discovering they hold dual citizenship.

Under Australia's constitution, a person cannot run for federal office if they hold dual or plural citizenship.

Mr Canavan, a Liberal Party member, said he was unaware his mother had registered him as an Italian citizen when he was 25 and he was now seeking a legal opinion on whether he must resign as an MP as well.

The 36-year-old Queensland senator was elected in 2013 and promoted to Cabinet after the 2016 election, and had been seen as a rising star of the National Party.

His mother, who has never visited Italy either and was born in Australia, apparently registered herself and her son for overseas citizenship at the Italian consulate in Brisbane in 2006.

In a statement, Senator Canavan said he would not resign from Parliament.

"In the short time available I have not been able to obtain definitive legal advice as to whether my registration as an Italian citizen, without my knowledge or consent, was valid under Italian law," he said.

"I am seeking to obtain that advice presently."

Australian Labor Party frontbencher Tony Burke said it was an unusual explanation and it would now be up to the country's High Court to test it.

"But that's the version of events that he's provided publicly and you've gotta presume that'll be tested before the courts."

Deputy Prime Minister Barnaby Joyce will take over Mr Canavan's Cabinet responsibilities while his eligibility is determined by the High Court.

It comes just weeks after two Greens senators, Larissa Waters and Scott Ludlam, resigned from Federal Parliament due to their own dual citizenships.

When Mr Ludlam resigned, claiming he had no idea he was a New Zealand citizen, the Prime Minister described it as a "remarkable oversight".

Mr Burke however said if Mr Canavan's explanation were true he could hardly be blamed for it.

"It's certainly from the way he's explained it, you know, I don't think anyone can be - on the face of it - blaming him for it if he's never been to Italy and had no way of knowing."

"I remember when Malcolm Turnbull was gloating - it was a bit vicious at the time - about the Greens making some of these errors," he said.

"I did have a thought, 'we'll be careful about going too hard at this point in time', and now that looks like exactly what's happened to a very serious minister."

Mr Burke did not criticise Senator Canavan for staying in Parliament pending a High Court determination.

"I've never seen a Parliament like this one - we're a year into it and we're still working out who's allowed in and who's not," he said.

It is not yet known whether Senator Canavan will refrain from voting in the Upper House until his eligibility is determined.