Iraqi PM Haider al-Abadi has visited Mosul to congratulate Iraqi forces for their "victory" over Islamic State (IS) in the city. 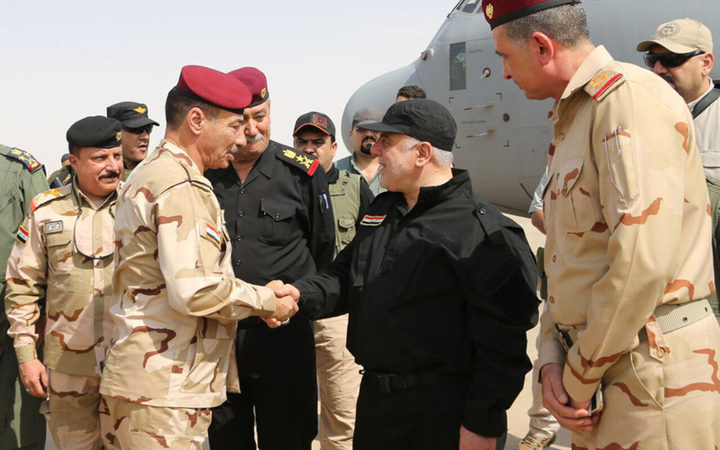 Mr Abadi was there to announce the city's full "liberation", his office said in a statement.

Islamic State militants seized it in June 2014 before taking much of Iraq's Sunni Arab heartland and proclaiming a "caliphate" straddling Iraq and Syria.

The Iraqi prime minister arrived to "congratulate the armed forces and the Iraqi people" on the final defeat of IS in Mosul on Sunday, the statement said. An official speech is expected soon.

Iraqi forces have been battling the remaining pockets of jihadists desperately holding out in a tiny area near the Old City.

Sporadic bursts of gunfire could still be heard on Sunday, and plumes of smoke rose into the sky.

Thirty IS militants were killed as they attempted to escape the advance of the Iraqi forces by throwing themselves in the River Tigris, state media said.

The government announced the "liberation" of eastern Mosul in January, but the west of the city, with its narrow, winding streets, has presented a more difficult challenge.

Some 900,000 people have been displaced from the city since 2014 - about half the the pre-war population - aid organisations say.

As "victory" was proclaimed in Mosul, Save the Children warned of the psychological impact on the children "haunted by memories of extreme violence, or of loved ones killed in front of them".

"For children and their families to process these horrors and rebuild their lives, psychological support will be absolutely crucial", said Ana Locsin, Save the Children's Iraq country director.

"But right now the world is providing next to no funding for mental health."

The Islamic State group has lost large parts of the territory it once controlled in Iraq since the regional offensive began.

But the fall of Mosul does not mean the end of IS in the country. It still has territory elsewhere - such as Tal Afar and three towns in the western province of Anbar - and is able to carry out bombings in government-held areas.

French President Emmanuel Macron was among the first to hail the victory of Iraqi forces in Mosul on Sunday, praising the fighters - including French troops in the coalition - who had made it possible.