Iraqi security forces have recaptured the site of the destroyed Great Mosque of al-Nuri in Mosul after driving back Islamic State (IS) militants. 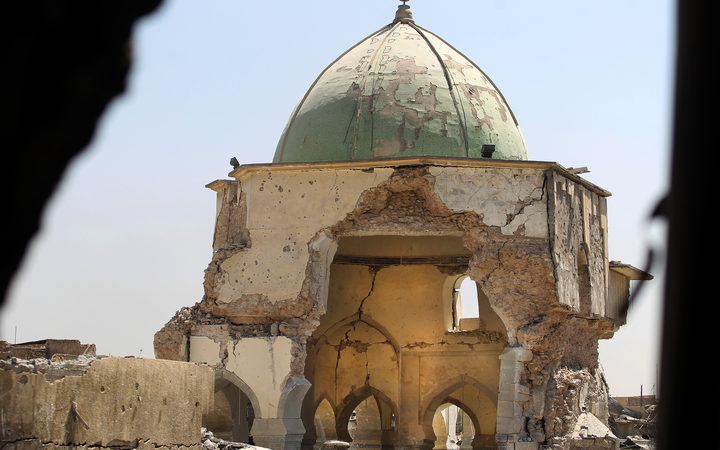 A BBC reporter who is embedded with troops said the complex was still exposed to sniper and mortar fire.

Militants blew up the mosque and its landmark leaning minaret last week.

"We will not relent, our brave forces will bring victory," he added. "We will continue to fight Daesh until every last one of them is killed or brought to justice."

The mosque is of great symbolic importance to both sides because Abu Bakr al-Baghdadi made his only public appearance as IS leader there days after the jihadist group proclaimed the creation of a "caliphate" exactly three years ago.

The militants are now in retreat across Iraq and neighbouring Syria, where US-backed Kurdish and Arab fighters are laying siege to the city of Raqqa.

A coalition spokesman tweeted that some 84,000 sq km of territory had so far been retaken and more than four million people freed from IS rule, adding: "[IS's] so-called caliphate is crumbling; from outside and from within". 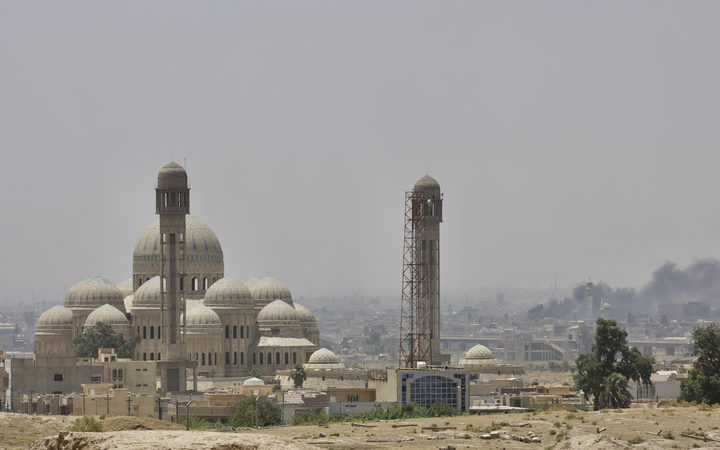 The mosque was named after Nur al-Din Mahmoud Zangi - famous for mobilising and unifying Muslim forces to wage jihad against the Christian Crusaders. Photo: AFP

Iraqi pro-government forces launched an offensive to retake Mosul in October with air and ground support from a US-led multinational coalition.

They managed to take full control of the eastern half of the city in January and started an assault on the west the following month.

Only a few hundred militants are now believed to be left in about 1 sq km of the Old City, along with some 50,000 civilians who humanitarian organisations say have little food or water and are at great risk of injury or death.

The assault reportedly triggered clashes throughout the morning, with IS militants holding strong defensive positions, our correspondent adds.

The overall commander of the offensive, Lt Gen Abdul Amir Yarallah, swiftly declared that CTS troops had taken control of what remained of the Nuri mosque, as well as the Sirjkhana district.

But it was not until several hours later that troops entered the mosque complex, our correspondent says.

The Great Mosque was named after Nur al-Din Mahmoud Zangi - famous for mobilising and unifying Muslim forces to wage jihad against the Christian Crusaders - who ordered its construction in 1172, shortly before his death.

Despite its connection to such an illustrious figure, all that remained of the original mosque was its leaning minaret - nicknamed "al-Hadba", or "the humpback" - some columns and the mihrab, a niche indicating the direction of Mecca.

The Iraqi military said IS militants blew up the mosque and minaret eight days ago, leaving only the base of the minaret and a dome supported by a few pillars.

IS accused the US-led coalition aircraft of bombing the site, but experts said a video circulated online appeared to show charges inside the structures exploding.