A suicide car bomber killed at least 11 people, including four police officers, in an attack near a checkpoint in the volatile southwestern Pakistani city of Quetta on Friday, officials say. 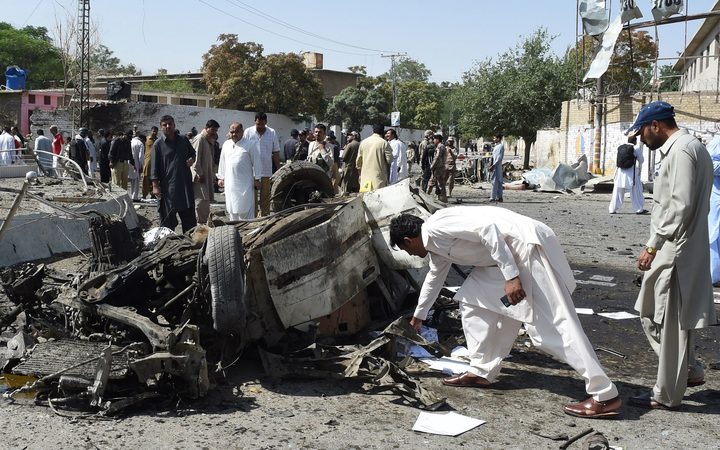 Pakistani security officials inspect the site of a powerful explosion that targeted a police vehicle in Quetta. Photo: AFP

Abdul Razzaq Cheema, director general of police in Baluchistan province, told Reuters it appeared the bomber had detonated a car packed with explosives.

A spokesman for the Civil Hospital in Quetta, Wasim Baig, said at least 11 bodies were taken to hospital, along with 19 wounded people.

A doctor at the hospital said four of those killed were police officers, while nine security officials were among the wounded.

Baluchistan government spokesman Anwar ul Haq Kakar said the blast happened near the office of the Inspector General (IG) of police when officers stopped the car to search it near a checkpoint.

"It's possible the IG office was the target, or the assailants were trying to enter the (army) cantonment which is close by," he said.

Television footage showed emergency services rushing to the scene, which was covered in debris, while security officials cordoned off the area.

The normally busy intersection - which lies between a girls' school, a girls' college, the police office and the entrance to the army cantonment - was relatively quiet because Friday is a public holiday ahead of the Eid celebrations marking the end of the holy Islamic month of Ramadan.

Quetta is about 100 km east of the border with Afghanistan and is the capital of Baluchistan, which has been plagued by militant violence. The province is the base of a separatist movement as well as home to the Taliban and other militant Islamist groups.

It is also at the centre of Chinese-backed 'Belt and Road' development projects worth $57 billion that first focused on Chinese firms building roads and power stations but is now expanding to include setting up industries.

That attack prompted Pakistan to boost security around Chinese nationals and other foreigners in the province, which is already one of the most militarised regions in the country.