At least 24 people have been killed and more than 70 injured in a blast outside a mosque in north-west Pakistan. 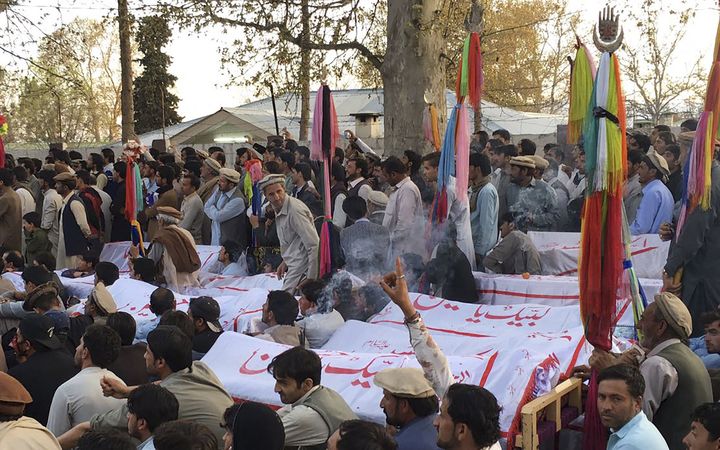 Pakistani mourners gather around the coffins of blast victims during a protest following the powerful bomb explosion near a market in Parachinar. Photo: AFP

The explosion happened in the city of Parachinar, a mainly Shia Muslim area on the Afghan border.

A car packed with explosives was left near the women's entrance of the mosque as people gathered for Friday prayers, reports said.

A faction of the Pakistani Taliban (TTP), Jamaat-ul-Ahrar (JuA), said it had carried out the attack.

Many shops and vehicles close to the mosque were damaged in the powerful blast.

"People were screaming for help... When I looked back everything was filled with dust," shopkeeper Sardar Hussain told AFP.

Kamran Ali told the Associated Press news agency he was inside his shop when the blast happened.

"My shop partially collapsed and I was unable to move for the next 30 minutes or so, and then residents brought me to hospital," he said.

The Pakistani Army sent a helicopter to help take the injured to hospital.

A doctor at a local hospital said an appeal was being made for blood donors to help treat the wounded.

"Patients are being brought to us in private cars and ambulances and we have received over three dozen patients so far," the doctor told Reuters news agency.

Parachinar was also targeted in January, when a bomb blast in a vegetable market killed at least 20 people. That attack was also claimed by JuA.

Nationally, Pakistan has seen an upsurge in violence since the beginning of the year. Last month, more than 80 people were killed in an attack at a Sufi shrine in Sindh province. The so-called Islamic State militant group said it carried out that attack.

Parachinar is the capital of the Kurram, one of Pakistan's seven tribal districts.

These areas are governed according to local laws and customs, and are known for sectarian clashes between Sunni and Shia Muslim groups.