Tributes are being paid to the 22 people killed in the attack at Manchester Arena, including an eight-year-old girl and a Polish couple who were picking up their children. 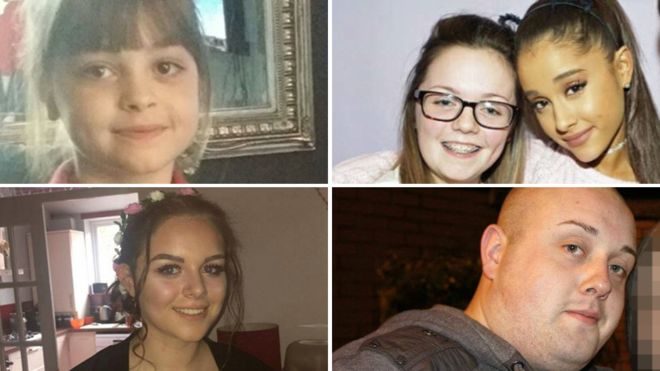 Eight-year-old Saffie Roussos, Olivia Campbell, 15, John Atkinson, 28, Georgina Callander - thought to be 18 - and Kelly Brewster have been named among those who died.

About 20 of the injured remained in a critical condition, with a doctor saying they were battling "highly traumatic injuries" such as damage to major organs and limbs.

A vigil was held in Manchester on Tuesday evening to show support for victims and their families, and those still searching for loved ones after the suicide bomb attack on 22 May at a concert by US singer Ariana Grande.

UK Prime Minister Theresa May said on Tuesday that the attack targeted "innocent children, young people and their families".

The chief officer for health and social care services in the greater Manchester area, Jon Rouse, said 64 people were now being treated for injuries.

Some of the worst injured would need very long term care and support, he said.

"She was loved by everyone and her warmth and kindness will be remembered fondly."

"News of Saffie's death in this appalling attack has come as a tremendous shock to all of us and I would like to send our deepest condolences to all of her family and friends.

"The thought that anyone could go out to a concert and not come home is heartbreaking.

"Our focus is now on helping pupils and staff cope with this shocking news."

The death of Olivia Campbell, 15, was announced by her mother Charlotte on Tuesday after an agonising search.

Charlotte Campbell, from Bury in Greater Manchester, wrote: "RIP my darling precious gorgeous girl ... taken far far too soon go sing with the angels and keep smiling mummy loves you so much."

Olivia's family had spent the day desperately searching for her, hoping she was one of the dozens of people injured and being treated in hospital.

Student Georgina Callander, thought to have been 18, had already met Grande before seeing her perform on Monday.

She had previously posted a photograph in 2015 on her Instagram account of herself with the 23-year-old singer.

Before the concert, Miss Callander had sent a Twitter message to Grande, saying: "SO EXCITED TO SEE YOU TOMORROW."

Friends paid tribute to their "beautiful" Georgina on social media and said she was one of the first people taken to hospital after the attack.

Miss Callander had been studying at Runshaw College in Leyland, Lancsashire, and was in the second year of a health and social care course.

"Our deepest sympathies, thoughts and prayers go out to all of Georgina's family, friends, and all of those affected by this loss," Runshaw College said in a statement.

"We are offering all available support possible at this tragic time, including counselling with our dedicated student support team."

A fund-raising page has been set up to help her family with funeral and memorial costs.

Bolton Wanderers Football Club also paid tribute to Georgina, who had played for their under-11 girls' team in 2010.

Club chaplain Phil Mason said: "Our thoughts and prayers are with her friends and family during this awful time of loss."

He said there would also be a minute's silence before the first team ladies' friendly against Wigan Athletic on Wednesday evening at Macron Stadium, and the team would wear black armbands.

John Atkinson, 28 was described by friends as "a true gentleman" in online tributes.

Friends of Mr Atkinson, who had lived in Bury, have also set up a fund-raising page to help his family, which has raised more than £4000.

"A true gentleman. R.I.P John thoughts and prayers with you family and all of the other victims effected by this tragedy," she said.

"John was one in a million and loved by so many," she added.

Kelly Brewster, from Sheffield, South Yorkshire, was separated from her sister at the end of the performance.

Family and friends reported her missing but later found out she had died.

Miss Brewster was "the happiest she had ever been", according to her partner.

Ian Winslow wrote on Facebook: "Not sure how this works but it isn't good news. Kelly Brewster wasn't one of the unidentified hospital patients. She has sadly passed away in the terror attack.

"Kelly really was the happiest she has ever been and we had so many things planned together. My daughter Phoebe will be absolutely devastated like we all are."

Two Polish parents were killed while collecting their daughters from the venue, the Polish Ministry of Foreign Affairs has confirmed.

Foreign Minister Witold Waszczykowski told a Polish radio station: "The parents came after the concert to collect their daughters and unfortunately we have information that they are dead. The children are safe."

Another Polish national was injured in the attack, a spokesman said.

"We share the pain of the family and the loved ones of the victims and express our most sincere condolences," he said.

The BBC reported several people were still missing after the attack, including Eilidh MacLeod, 14, from Barra in the Outer Hebrides, Chloe Rutherford, 17, and Liam Curry, 19.

Eilidh's friend, Laura MacIntyre, 15 - who was also reported as missing - was later identified as one of the seriously injured in a Manchester hospital.