The UK Prime Minister Theresa May has called the killing of 22 people by a suicide bomber in a packed concert hall a sickening act targeting children and young people. 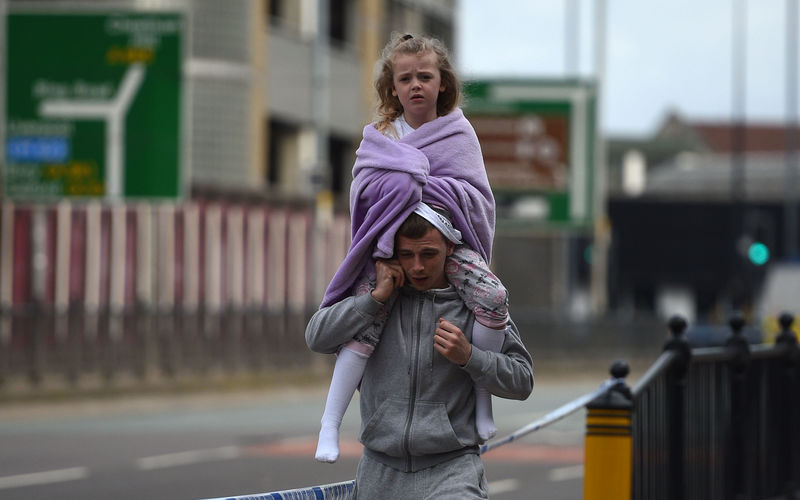 A man carries a young girl on his shoulders near Victoria station in Manchester. Photo: AFP 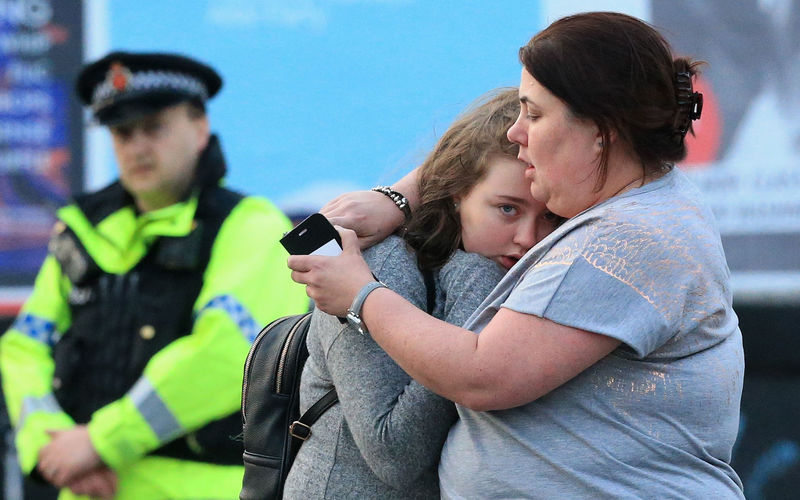 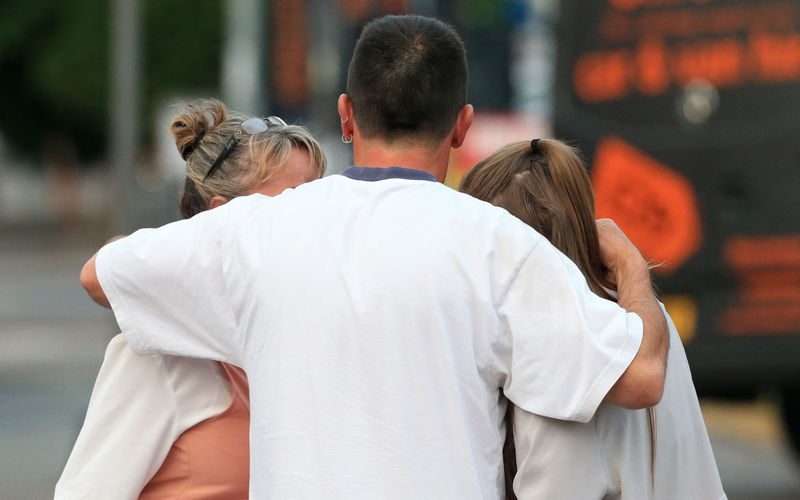 A man hugs his wife and daughter outside the Manchester Arena. Photo: AFP 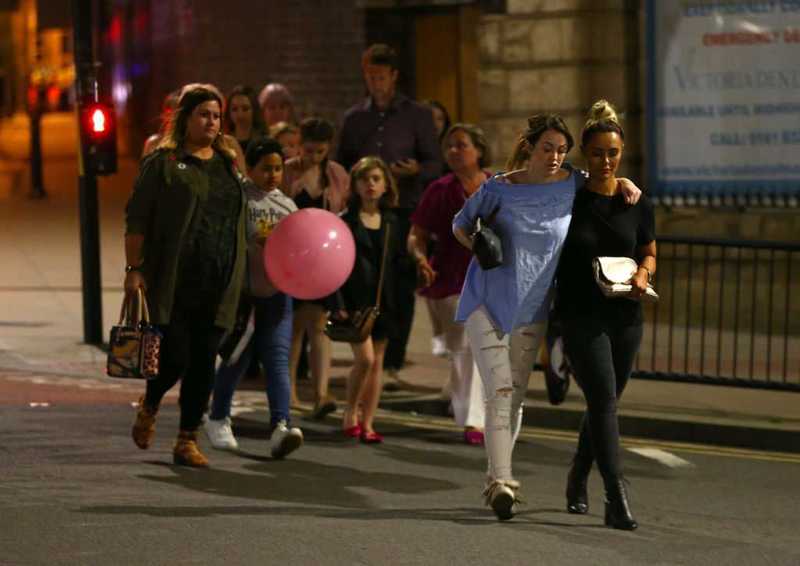 Police escort members of the public from the arena shortly after the blast. Photo: Getty Images 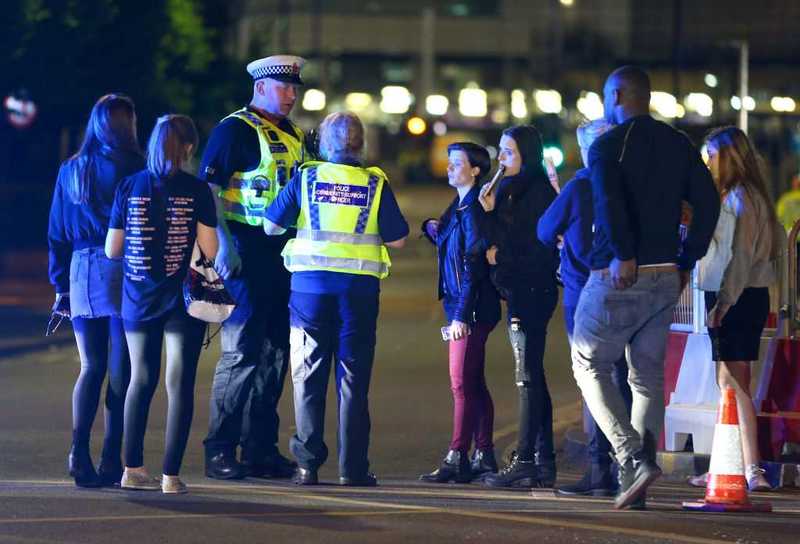 Police and fans close to the arena after the explosion. Photo: Getty Images 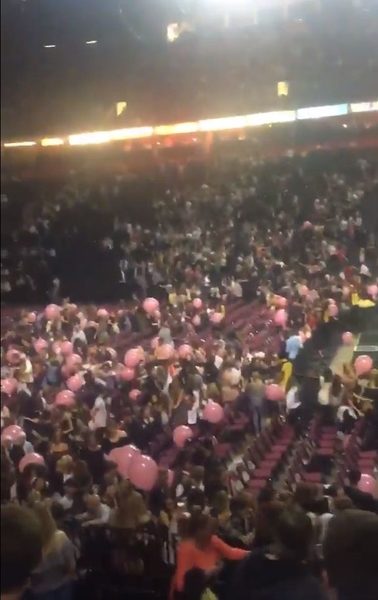 Inside Manchester Arena shortly after the explosion. Photo: Twitter / @hannawwh

People run through Victoria Station, next to Manchester Arena following the explosion. The station has since been evacuated. Photo: Screenshot / Twitter / @zach_bruce 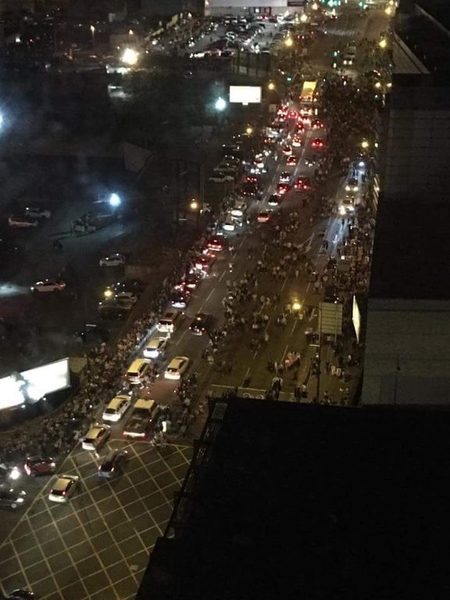 The scene outside the arena after the blast: Photo: Twitter / @SamJJShawcross 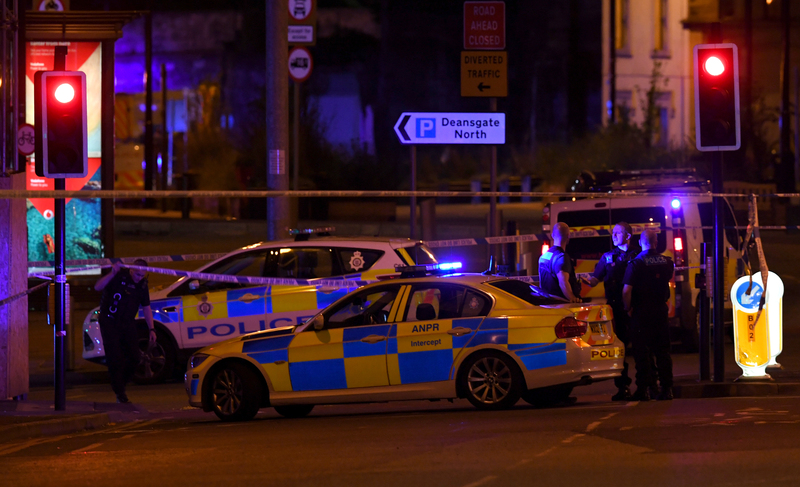 Police arrive at the scene and cordon off areas around the venue. Photo: AFP 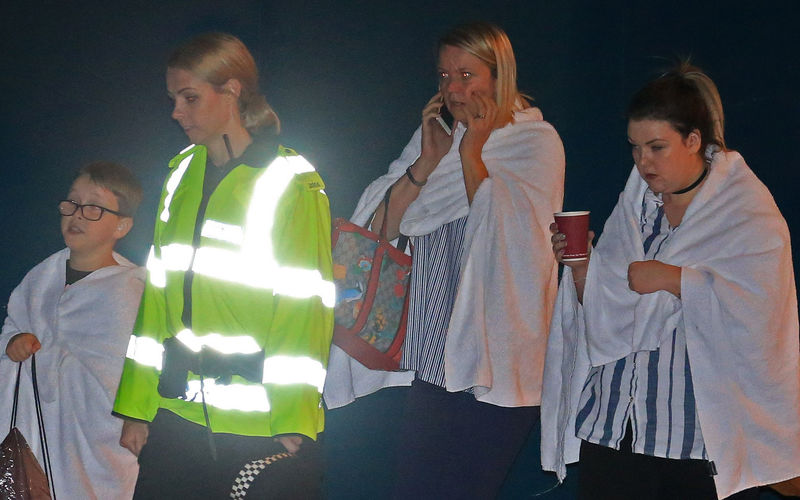 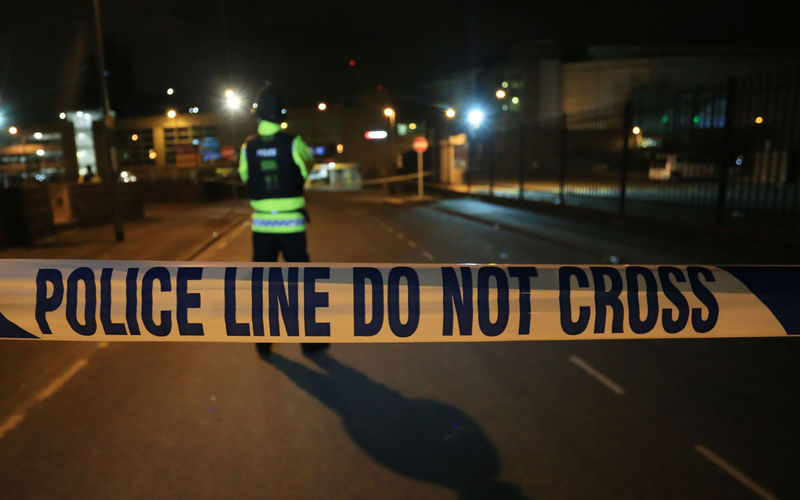 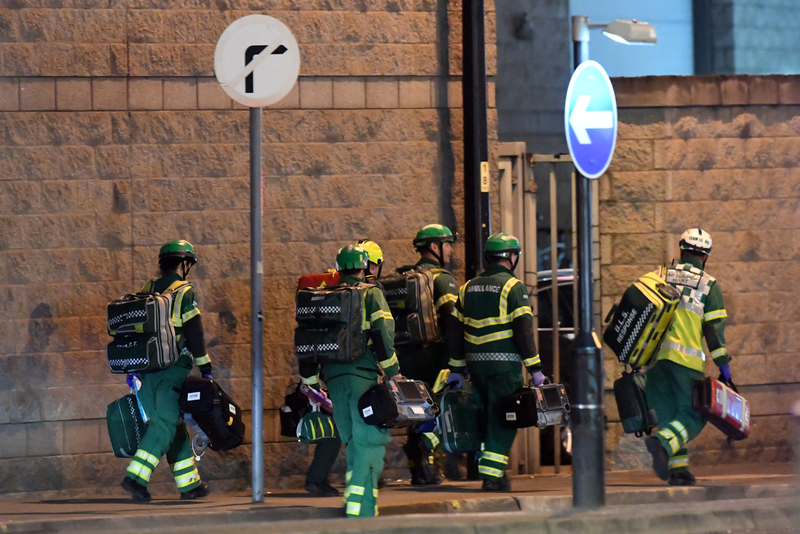 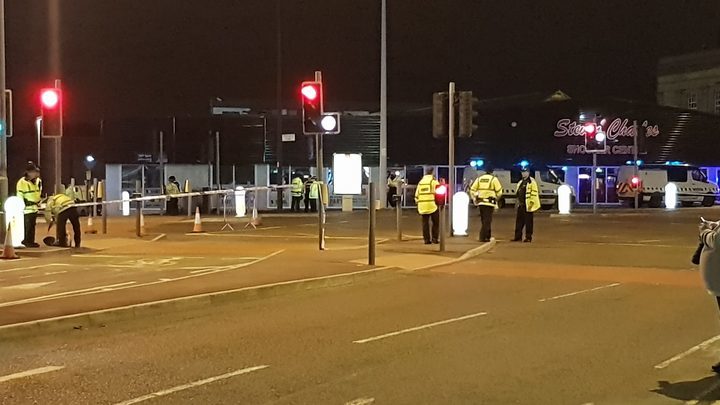 Police close off surrounding streets. The cordon extends around the arena, nearby Victoria Station and Manchester Cathedral. Photo: AFP 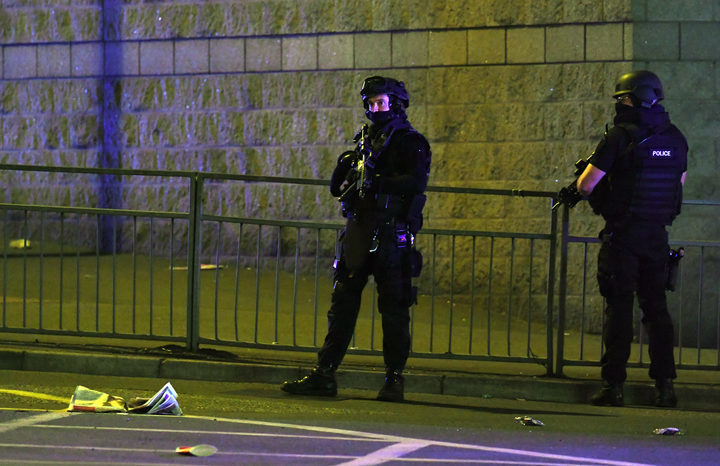 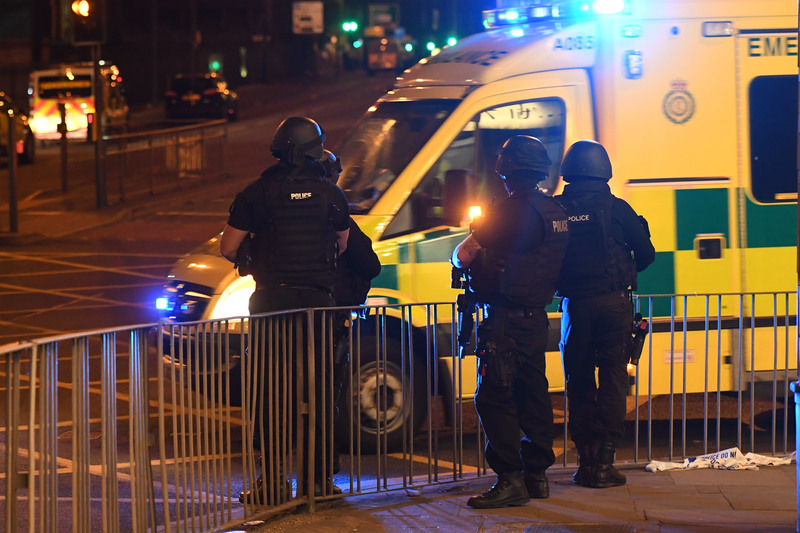 Emergency response vehicles arrive at the scene of the blast. Photo: AFP 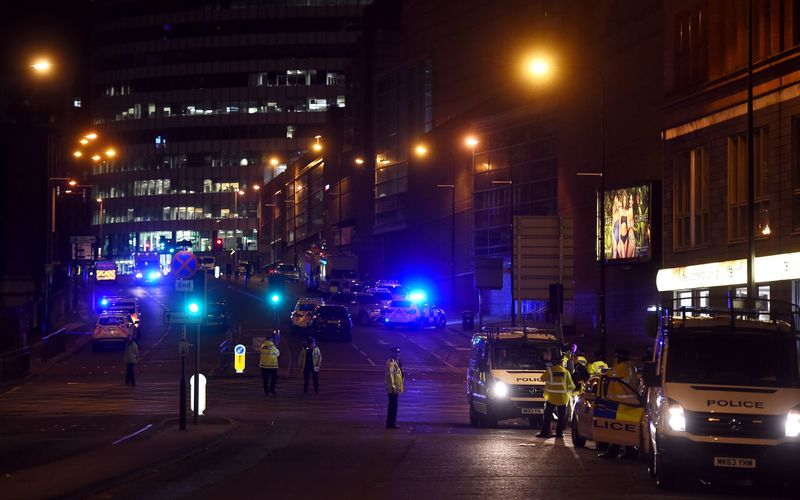 Emergency services arrive at the scene after the blast. Photo: AFP 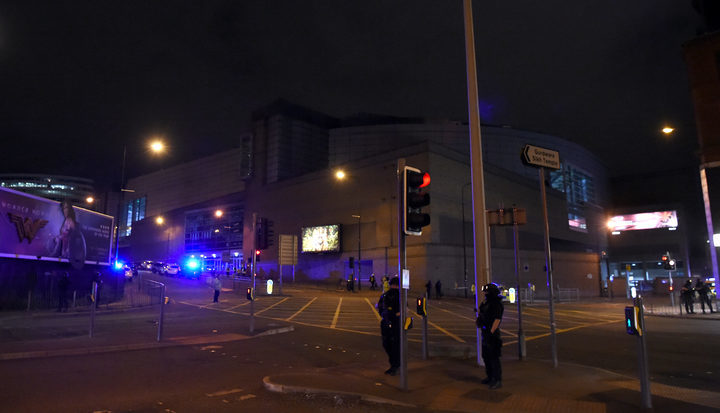 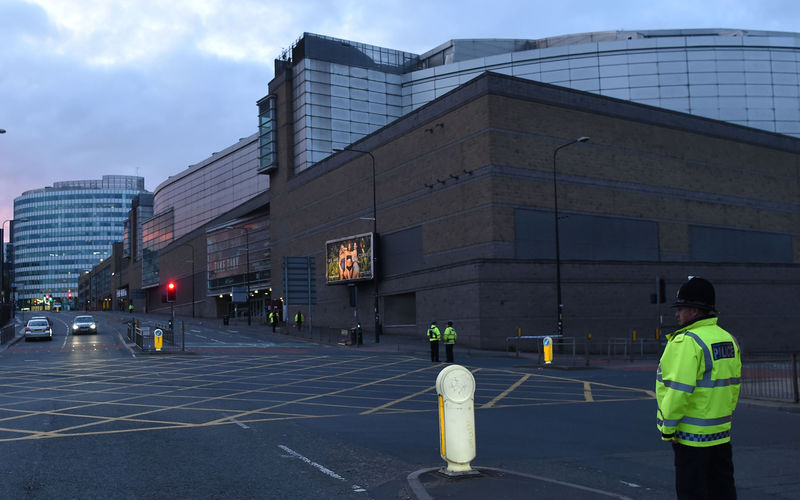 Police stand guard at the scene on the day after the attack, as the sun rises. Photo: AFP 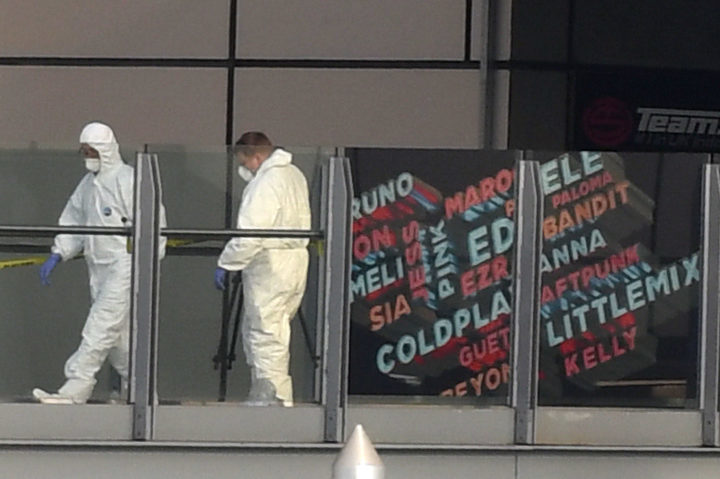 The blast, which happened just before 10.35pm local time, occurred shortly after US singer Ariana Grande had finished performing at the Manchester Arena.

The singer was unhurt but nearly 60 people were injured in the assault.

Islamic State has claimed responsibility for the attack.

Speaking outside 10 Downing Street after she chaired a special cabinet security meeting, Mrs May said the bomber's identity was known to police but they were not yet ready to identify him

"All acts of terrorism are cowardly...but this attack stands out for its appalling sickening cowardice, deliberately targeting innocent, defenceless children and young people who should have been enjoying one of the most memorable nights of their lives," Mrs May said.

"The cowardice of the attacker met the bravery of the emergency services and the people of Manchester.

"The attempt to divide us met countless acts of kindness that brought people closer together."

Mrs May said the man carried out the attack alone but it would "take some time" to determine if others had helped in the preparation.

London Mayor Sadiq Khan said more police had been ordered onto the streets of the British capital.

Manchester Chief Constable Ian Hopkins said: "We believe, at this stage, the attack last night was conducted by one man.

"The priority is to establish whether he was acting alone or as part of a network.

"The attacker, I can confirm, died at the arena. We believe the attacker was carrying an improvised explosive device which he detonated causing this atrocity."

Mr Hopkins said it was the most horrific incident they have faced in Greater Manchester, and more than 400 armed officers were deployed last night to the incident.

He said he did not know the ages of the victims, but confirmed there were children among the dead.

In an address to the nation, UK Home Secretary Amber Rudd said it was a barbaric attack on people who were just trying to enjoy themselves.

She said the public should "remain alert but not alarmed", and should let authorities know if they have any information about the killings.

Britain is on its second-highest alert level of "severe", meaning an attack by militants is considered highly likely. Counter-terrorism police have said they are making on average an arrest every day in connection with suspected terrorism.

British PM Theresa May - who faces an election in a few weeks - said her thoughts were with the victims and their families. She and Jeremy Corbyn, the leader of the opposition Labour Party, have agreed to suspend campaigning ahead of the 8 June election.

Cordons are in place around the arena, nearby Victoria Station and Manchester Cathedral.

'Everybody was running and screaming and just trying to get out'

Witnesses said they heard two loud bangs, reported to be near the ticket office of the arena, and described seeing nuts and bolts strewn across the floor after the blast.

Concert-goer Catherine Mansfield said she felt a massive explosion as she was leaving.

"We were making our way out and when we were right by the door there was a massive explosion and everybody was screaming," she told Reuters.

"It was a huge explosion - you could feel it in your chest. It was chaotic. Everybody was running and screaming and just trying to get out of the area."

A spokesman for the pop singer's record label said that she was physically "OK". She later posted a short message on Twitter, saying she was "broken" and at a loss for words.

broken.
from the bottom of my heart, i am so so sorry. i don't have words.

The Ministry of Foreign Affairs and Trade said there was no indication at this stage that any New Zealanders had been injured in the explosion.

It said there were currently 14 New Zealanders registered on SafeTravel as being in Manchester.

Greater Manchester Police have urged people to stay away from the area, as emergency services continued to work at the scene. Public transport disruption was expected.

Manchester Arena, the largest indoor arena in Europe, opened in 1995 and has a capacity for 21,000 people, according to its website. It is a popular concert and sporting venue.

New Zealand Prime Minister Bill English said his thoughts were with the people of Manchester following the bombing, which he described as an awful tragedy.

Elsewhere, President XI Jinping of China has telephoned the Queen to offer his condolences.

In a tweet, India's prime minister Narendra Modi said he was pained by the attack, which he strongly condemned.

German Chancellor Angela Merkel expressed shock and sorrow and assured the people of Britain that Germany stood by their side.

US President Donald Trump, who is currently in Israel, condemned the attack, saying the perpetrators were evil losers. He offered prayers to the people of Manchester.

And Australian Prime Minister Malcolm Turnbull offered his sympathy along with what he described as resolute solidarity with the people of Britain.