The Syrian government and rebel groups have begun an operation to move people away from four besieged towns, activists say. 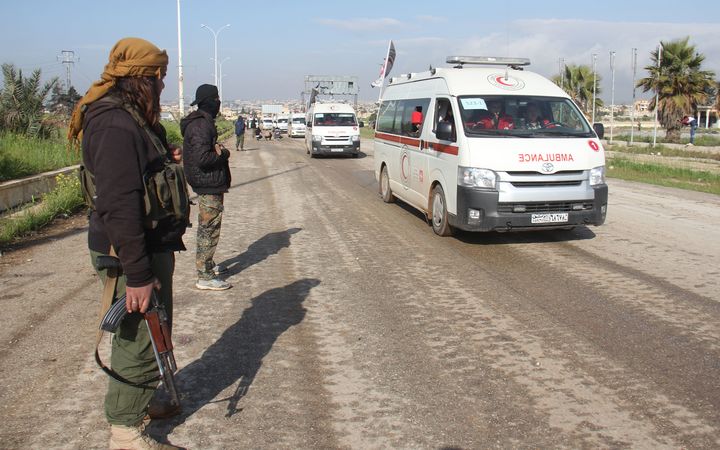 People from Foah and Kefraya, two government-held towns in the north-west, have arrived in Rashideen, west of Aleppo, AFP news agency reports.

Similar operations have begun in rebel-held Madaya, near Damascus.

It is not clear if nearby Zabadani, included in the deal, is also being evacuated.

Last month, the UN described the situation in the four towns as "catastrophic", with more than 64,000 civilians "trapped in a cycle of daily violence and deprivation".

Many people are reported to have died as a result of shortages of food or medicine.

Foah and Kefraya, most of whose residents are Shia Muslims, have been encircled by rebels and al-Qaeda-linked Sunni jihadists since March 2015.

Madaya and Zabadani, which are predominantly Sunni, have meanwhile been besieged since June 2015 by the Syrian army and fighters from Lebanon's Shia Islamist Hezbollah movement.

The evacuation deal has been brokered by Iran and Qatar. But critics say it amounts to forced demographic change.

Some 4.7 million people live in hard-to-reach and besieged areas in Syria, including 644,000 in UN-declared besieged locations.

Meanwhile, the foreign ministers of Russia, Syria and Iran are due to meet in Moscow in the first meeting of the three allies since the US fired 59 cruise missiles at a Syrian airbase near Homs.

The US says its strike was in response to a Syrian government chemical attack in the rebel-held town of Khan Sheikhoun, in which more than 80 people were killed.