At least 97 African migrants, including women and children, are missing after their boat sank off the Libyan coast, a coastguard spokesman has said. 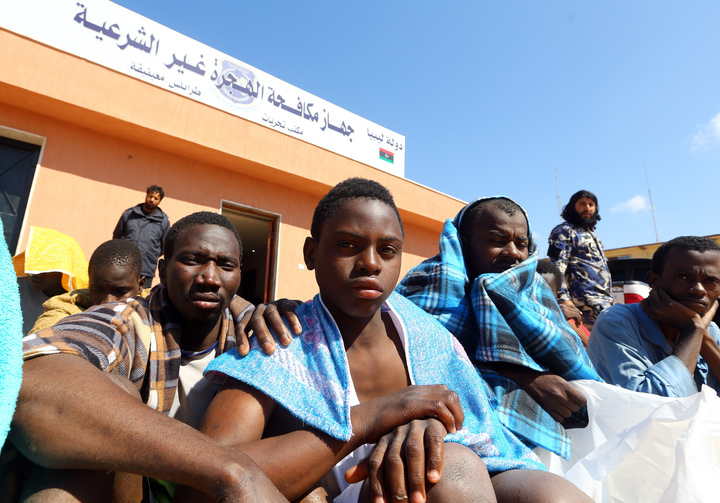 Some of the African migrants who were rescued. Photo: AFP

A total of 23 male survivors were rescued while clinging to a floating device, Ayoub Kassem added.

Rescue operations are continuing, but the chances of finding more survivors are slim, reports say.

Libya is a major transit point for migrants trying to cross the Mediterranean to Europe.

At least 590 of them have died or have gone missing along the Libyan coast so far this year, according to the International Organization for Migration (IOM).

Survivors reported that 15 women and five children were among those missing when the latest boat sank less than 10km off the coast of the capital, Tripoli.

"What happened is that the base of the boat got wrecked and the boat had sunk," Mr Kassem was quoted by Reuters news agency as saying.

Survivors said the inflatable boat had set off with about 120 people on board, most from Sub-Saharan Africa.

Nearly 25,000 migrants have arrived in Europe since the beginning of the year, taking a perilous journey across the Mediterranean.

Their exit from Libya is made easier but more dangerous by the disbandment of Libya's security forces in the aftermath of the fall of Muammar Gaddafi in 2011.

Some militias act as unofficial coastguards but are often accused of profiteering from people smuggling.

A 12-year-old survivor from Ivory Coast - now being accommodated at the Maitiga detention centre in the Libyan capital Tripoli - told the BBC that "the boat broke and my mother died".

A BBC producer at the detention centre said survivors had been given blankets and water.

Another survivor, Mohamed Amine from Mali, told the BBC: "We were at sea in the boat for three days… we were rescued after it capsized."