At least 58 people have been killed and dozens wounded in a suspected chemical attack on a rebel-held town in north-western Syria, a monitoring group says. 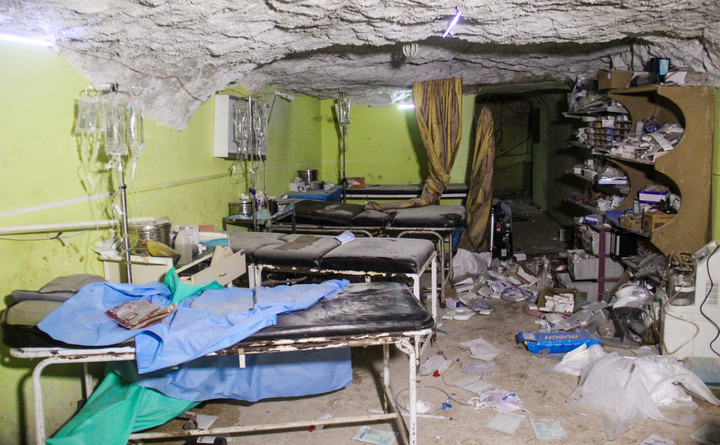 Damage at a hospital in Khan Sheikhun after a suspected chemical attack. Photo: AFP

The Syrian Observatory for Human Rights reported there were strikes on Khan Sheikhoun by Syrian government or Russian jets.

A Syrian military source denied the government had used any such weapons and Russia's defence ministry insisted it had not carried out any air strikes in the area.

The warplanes are reported to have attacked Khan Sheikhoun, about 50km south of the city of Idlib, early on Tuesday.

Hussein Kayal, a photographer for the pro-opposition Edlib Media Center (EMC), told the Associated Press that he was awoken by the sound of an explosion.

When he reached the scene, there was no smell, he said. He found people lying on the floor, unable to move and with constricted pupils, he added.

Mohammed Rasoul, the head of a charity ambulance service in Idlib, told the BBC that his medics had found people, many of them children, choking in the street.

The Syrian Observatory (SOHR) quoted medics as saying that they had been treating people with symptoms including fainting, vomiting and foaming at the mouth.

An AFP news agency journalist saw a young girl, a woman and two elderly people dead at a hospital, all with foam still visible around their mouths.

The journalist also reported that the same facility was hit by a rocket on Tuesday afternoon, bringing down rubble on top of doctors treating the injured. The Edlib Media Center and the opposition Local Co-ordination Committees (LCC) network said warplanes had targeted several clinics.

Pro-government journalists later cited military sources as saying there had been an explosion at an al-Qaeda chemical weapons factory in Khan Sheikhoun that was caused either by an air strike or an accident.

The SOHR put the death toll at 58, including 11 children, but Mr Rasoul reported that 67 people had been killed and that 300 were injured. The pro-opposition Step news agency meanwhile said 100 had died.

One aid agency, the Union of Medical Care and Relief Organisations, the death toll at more than 100 and said that the figure was likely to rise

The Edlib Media Center said it had stopped counting the victims because there were so many. It posted photos showing what appeared to be at least seven dead children in the back of a pick-up truck. There were no visible traumatic injuries on their bodies.

The Syrian Observatory it was unable to say what exactly was dropped but the the EMC and LCC said it was believed to be the nerve agent Sarin, which is highly toxic and considered 20 times as deadly as cyanide.

UN Syria envoy Staffan de Mistura said it was an "horrific" attack and that there should be a "clear identification of responsibilities and accountability" for the attack on the rebel-held town.