The future for the Trans-Pacific Partnership should become clear in the next month or two, Trade Minister Todd McClay says.

Ministers and officials of the 11 remaining members of the TPP have held talks about how to keep the trade deal alive. 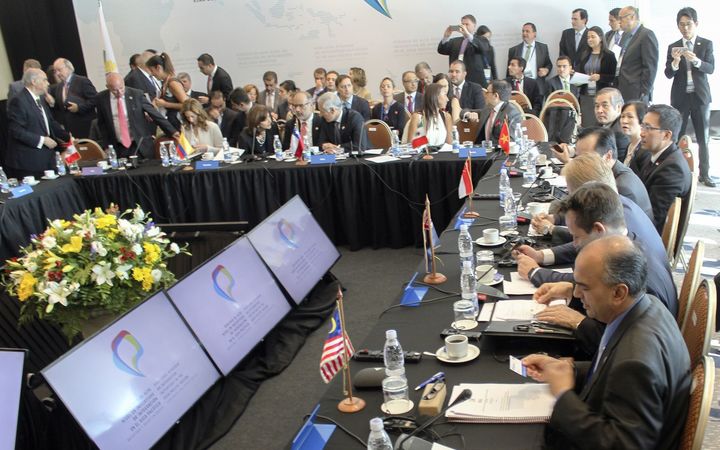 Ministers at the meeting Photo: AFP

The countries said in a joint statement after the meeting in Chile on Wednesday (local time) that they had discussed "a way forward that would advance economic integration in the Asia Pacific".

However, they did not elaborate on what that path might be.

Mr McClay said high level officials would analyse the status of the partnership and whether it could be revived without the United States.

He said there was a desire to come to terms with the situation pretty quickly, over the next few months.

http://www.radionz.co.nz/national/programmes/morningreport/audio/201836815/mcclay-there-is-life-still-in-the-tpp "After five or six years of negotiation, five or six more months of consideration is going to be worth it for us" - Todd McClay

The TPP was effectively torpedoed in its current form when newly elected US President Donald Trump in January withdrew from the trade pact that originally covered some 40 percent of global gross domestic product between 12 countries.

The remaining members met for the first time since then in Chile to try to thrash out a way forward.

"The participating partners reiterated their firm commitment to collaborate in keeping markets open and to the free flow of goods, services and investment," the countries' joint statement said.

Representatives "canvassed views on a way forward that would advance economic integration in the Asia Pacific".

It said trade officials would talk in coming weeks and ministers will meet again in May at an Asia-Pacific Economic Cooperation (APEC) gathering in Vietnam.

"The ministers have decided to continue with the process of consultations to preserve what is important, the substance of the accord," Chilean Foreign Minister Heraldo Munoz told journalists after the meeting.

While proponents of the TPP say it would promote growth and competition, critics say it does not do enough to protect jobs and rights.