People who wear face coverings while taking part in violent protests could face up to 15 years in jail under proposed legislation in Victoria. 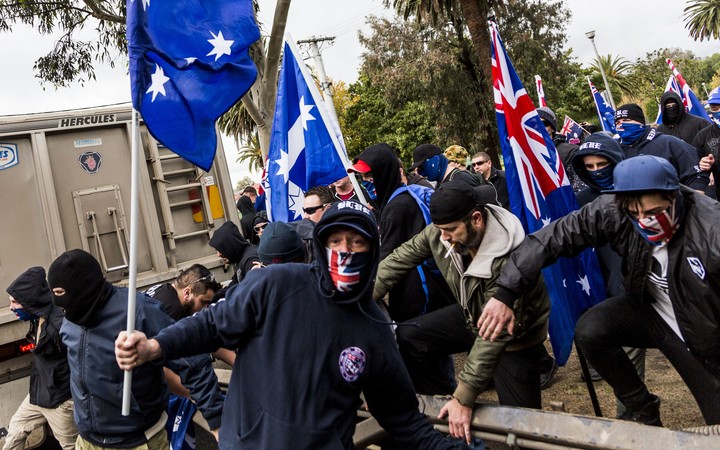 The proposal follows talks between the Australian state's government and its police after violent clashes between anti-racism and anti-Islamic activists in Coburg, Melbourne last year.

Attorney-General Martin Pakula said the legislation, which would introduce a new offence of violent disorder, would be introduced to Parliament next week.

"Too often we see at these events people turning up with masks and face coverings to try and hide their identity or to shield themselves from the effects of capsicum spray," he said.

"This legislation will make it clear that if you commit these violent offences with face coverings on, you'll get even longer periods in prison.

"For those who commit the offence of violent disorder, there'll be a 10-year jail penalty and up to 15 [years] if you commit that offence whilst wearing a face covering."

The new laws would also give police specific powers to order people to remove a face mask.

"It will be an offence to not comply," Mr Pakula said.

"The government believes it's important to create a powerful disincentive for people to turn up at these types of public events with face coverings on.

"It will be clear in the legislation that we're only talking about face coverings where the police believe you're wearing it for the purpose of concealing your identity, or for the purpose of protecting yourself against the impact of capsicum spray and the like."

The announcement comes two days after pepper spray was used and more than 50 people were arrested in a police crackdown on violent behaviour at Melbourne's Moomba Festival.

"That cowardly anonymity is not what we want to see in our city," he said.

"Any further police powers in order to deal with public safety at mass gatherings, I'm all for it."