French police have fired tear gas at Paris students who blockaded 16 high schools in protest at the alleged police rape of a young black man.

The demonstrations are the latest to be held in the capital over the alleged rape and other reported police abuses. 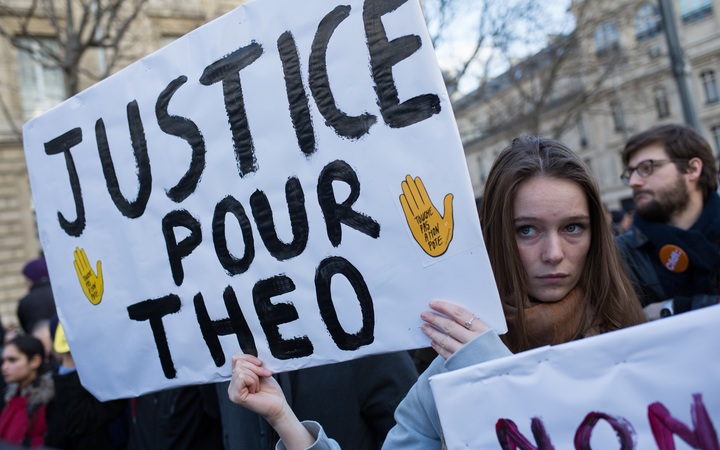 The victim, known publicly as Theo, reported officers beat him and raped him with a truncheon after stopping him on 2 February.

Four police officers have been suspended pending an inquiry.

The demonstrators set fire to bins after starting their protest at the Place de la Nation. Police made 26 arrests.

The protesters gathered outside schools in Paris to prevent students and teachers from entering, using rubbish bins and other objects to barricade the entrances.

The Paris school authority said youths targeted more than 10 schools. In one case, a deputy school director was injured when protesters hurled a fire extinguisher.

Pictures circulated on social media of clashes between police and protesters on the fringes of the Place de la Nation rally.

Police said the protests were unlawful because no prior permission was granted, according to local media.

Theo, who remains in hospital with injuries to his anus and head, earlier this month described his trauma at the hands of police.

He said he left home in north-west Paris and found himself in the middle of a police identity check targeting drug dealers.

He said he was then raped with a truncheon, racially abused, spat at and beaten around his genitals.

Theo has called for public calm and his family have said they had faith in the French justice system.

Education Minister Najat Vallaud-Belkacem said she understood young people's "emotion" over the Theo case, but called for public calm and denounced the violence.

"I am appealing for calm because excesses like this, violence and blocking entrances to places, are not acceptable. The state will show considerable firmness," she said on Public Senat TV.