Control of the ancient Syrian city of Palmyra has been going back and forth between government forces and Islamic State militants, reports say. 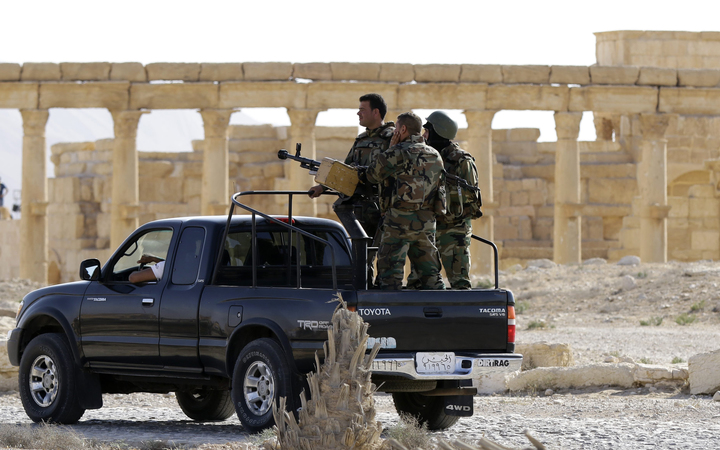 Government troops patrol the ancient Syrian city of Palmyra on 6 May 2016. Photo: AFP

The governor of the province, Talal Barazi, told Syrian state television that IS had recaptured the city on Sunday. He said the army was using "all means" to regain control.

IS held the Unesco World Heritage site of Palmyra from May 2015 until they were forced out in March this year.

The group launched its offensive earlier in the week, before re-entering Palmyra on Saturday.

On Sunday, it was reported that IS had been driven from the centre by heavy Russian air strikes.

The Russian defence ministry said it had carried out 64 strikes during the operation, and claimed to have killed more than 300 militants. Moscow had said the Syrian army repelled IS with air support from its forces.

But later it reported the militants had fought their way into the town, forcing government forces to retreat to the south.

Reports said IS militants had gone on the attack with suicide car bombs and artillery.

Palmyra is seen as strategic for IS because it lies close to oil fields.

The attack on the ancient city was a surprise setback and distraction for the government of President Bashar al-Assad.

It happened as his Russian-backed government forces closed in on the remaining rebel-held area of the city of Aleppo.

Rebel forces said on Saturday they had halted the advance of government forces in the small pockets they still control in Aleppo.

One commander of a group said a possible reason for the slowed government advance could be the redeployment of troops to Palmyra.

IS destroyed a number of monuments and beheaded the archaeological director during its 10-month occupation of the UNESCO World Heritage site and the adjacent city of Tadmur.

Two 2000-year-old temples, an arch and funerary towers were left in ruins.

While some treasured monuments were destroyed, much of the historic site was left undamaged.

The city was reclaimed in March with the support of air strikes by the Russian air force. IS subsequently lost large amounts of territory across Syria and Iraq.