US president-elect Donald Trump will have the first of his daily presidential briefings today, and tomorrow will meet incumbent Barack Obama to discuss the hand over of power. 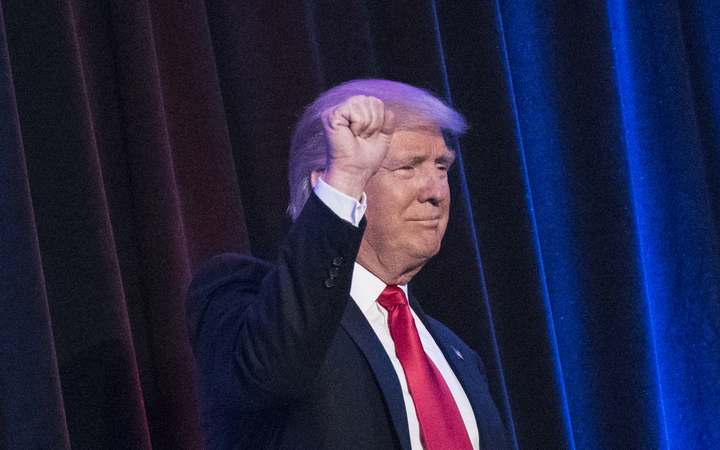 Donald Trump arriving at the New York Hilton Midtown to give his victory speech. Photo: AFP

He will not only assume power with a Republican-controlled House and Senate - a luxury his predecessor had for only two years - but with a Supreme Court vacancy to fill.

Some of his first-100-days pledges were made in a speech last month in Gettysburg, Pennsylvania.

So what can we expect from a Trump presidency?

In his victory speech Donald Trump spoke of a project to rebuild American infrastructure.

This is what Mr Trump has talked about in his Gettysburg, Pennsylvania address and at other times:

*Term limits for members of Congress

*Cancellation of all payments to UN climate change programmes

*Using that money to fix US infrastructure

He has also controversially vowed to build a wall on the southern border, paid for by Mexico. Right up until the campaign's final days, he has reassured his supporters this will happen, although it's not clear how or when.

Another priority, although it wasn't in his Gettysburg speech, is the renegotiation of trade deals like the North American Free Trade Agreement with Canada and Mexico.

He says these deals are responsible for shipping American jobs overseas.

Mr Trump has also vowed to forge a closer relationship with Russian President Vladimir Putin, whom he has praised as a strong leader.

And he has vowed to rip up the Iran nuclear deal, although it is not clear how soon he will walk away from a deal that involved six world powers and 12 years of planning.

Mr Obama's plan to spare five million undocumented people from deportation was halted by a ruling in Texas and remains frozen after deadlock in the Supreme Court. That was one of the president's most controversial executive actions and will have little hope of proceeding under a Trump presidency.

Mr Trump's vow to overturn President Obama's executive orders would be within his powers bequeathed by the office.

Likewise, the Obama action that all sellers of firearms must be licensed and conduct background checks, overturning current exemptions to some online and gun show sellers, would be reversed.

But many Republicans have refused to back him, so although his party is in its strongest position for more than a decade, he assumes the leadership of a party in revolt.

His controversial statements and hardline stance on immigration alienated many within his own party and divided the country.

But his vow to "put America first" has struck a chord with millions of Americans who feel let down by the system.