Iraqi special forces are now less than 1.5km from the eastern outskirts of Mosul and are preparing to enter the city held by Islamic State fighters. 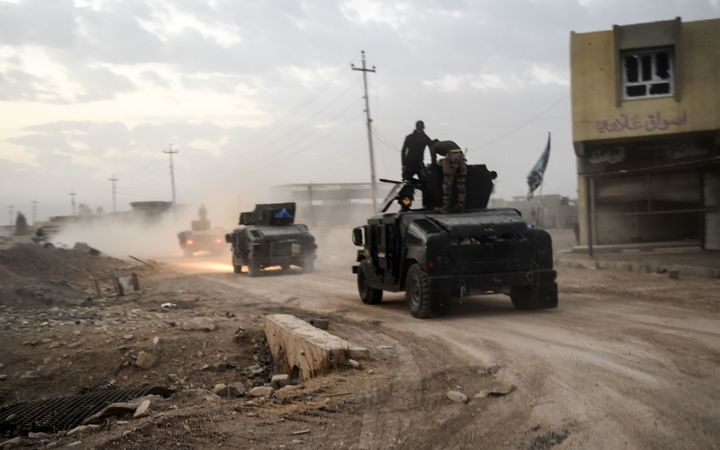 Members of the Iraqi Counter Terrorism Service near the village of Bazwaya, on the eastern edges of Mosul. Photo: AFP

A BBC correspondent travelling with them said there was some resistance, with car bombs targeting the convoy.

Units of the army's ninth division are meanwhile advancing from the south.

About 50,000 Iraqi security forces personnel, Kurdish Peshmerga fighters, Sunni Arab tribesmen and Shia militiamen are involved in the two-week-old offensive to drive IS militants out of their last major urban stronghold in the country.

Earlier, the military announced the start of an operation to retake the side of Mosul east of the River Tigris, which flows through the city.

BBC correspondent Ian Pannell, who is with a CTS unit, said the assault on Bazwaya, about 3km from Mosul, began early on Monday.

Hundreds of troops in heavily-armoured Humvees, together with tanks and bulldozers, advanced on the village, supported by US-led coalition air strikes. 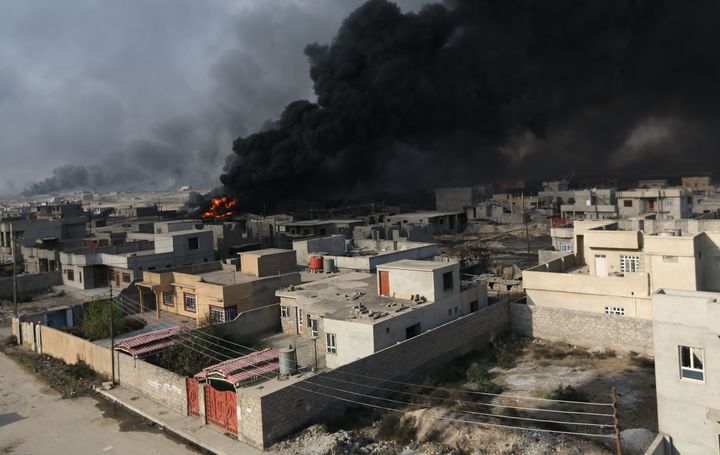 Smoke rises from oil wells in Al Qayyarah, which were set on fire by IS fighters to limit coalition forces pilots' eyesight. Photo: AFP

Within hours the head of the Iraqi military's Nineveh Operations Command, Lieutenant General Abdul Amir Yarallah, announced that they had entered Bazwaya and raised the Iraqi flag.

The BBC's correspondent said a column of troops was now probing different parts of Mosul's outskirts, as commanders decide where to go next.

One senior officer told the Associated Press news agency that they aimed to enter the city limits later on Monday, while another told Reuters they were already fighting in the Karama district.

CTS commander Lieutenant General Abdul Wahhab al-Saidi denied that troops had entered Karama, but he did say that they were moving on Kukjali, an industrial zone west of Bazwaya that lies about 1km from Mosul's municipal boundary.

It had been expected the CTS would halt its advance until troops and allied fighters on other frontlines also reached the outskirts of Mosul.

General Yarallah announced earlier that the army's ninth division had taken control of the village of Ellag, 17km south of Mosul.

Army units also recaptured a number of villages to the south-east and north, the military said, while federal police were moving north from the town of Shura towards Hamam al-Alil.

Mosul fell to the jihadists in June 2014 and their leader, Abu Bakr al-Baghdadi, chose a mosque in the city as a place to proclaim the establishment of a "caliphate".

Before the offensive began on 17 October, there were believed to be between 3000 and 5000 militants remaining in Mosul, along with up to 1.5 million civilians.

More than 17,700 residents have fled so far and, according to the UN's worst-case scenario, as many as 700,000 others could follow suit.