A United States Navy destroyer has been targeted in the Red Sea in a failed missile attack from territory in Yemen controlled by Houthi rebels. 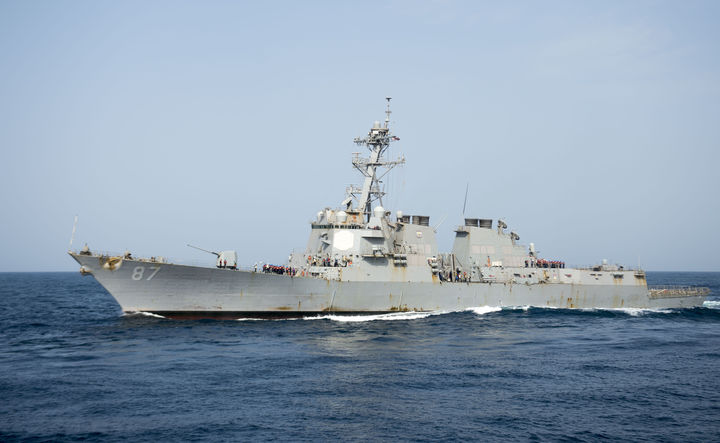 Multiple surface-to-surface missiles were fired at the USS Mason in international waters but the warship was able to defend itself and was not hit, a defence official said.

US officials said it was the third such incident in the past week.

It could provoke further retaliation by the US military, which earlier launched cruise missiles against three coastal radar sites in Houthi-controlled areas in response to missile attacks.

"The Mason once again appears to have come under attack in the Red Sea, again from coastal defence cruise missiles fired from the coast of Yemen," the US chief of naval operations, Admiral John Richardson, said in Baltimore on Saturday.

Last week's strikes, which were authorised by US President Barack Obama, marked Washington's first direct military action against suspected Houthi-controlled targets in Yemen's conflict, and raised questions about the potential for further escalation.

The Houthi movement this week denied responsibility for the attacks on the Mason and warned that it too would defend itself.

The Pentagon on Thursday stressed the limited nature of the strikes, which it said were aimed at radar suspected of enabling the launch of at least three missiles against the Mason earlier in the week.

Pentagon spokesperson Peter Cook said at the time that the US counterstrikes were not connected to the broader civil war in Yemen, which has killed more than 10,000 people since March 2015 and unleashed famine in the poor country.

The United States, a longtime ally of Saudi Arabia, has provided aerial refueling of warplanes from the Saudi-led coalition striking Yemen and supplies US weapons to the kingdom.

Iran, which supports the Houthi group, said last week it had deployed two warships to the Gulf of Aden to protect shipping lanes from piracy.