At least 11 people have been killed in an air strike which hit a hospital in northern Yemen run by Medecins Sans Frontieres (MSF), the aid agency says. 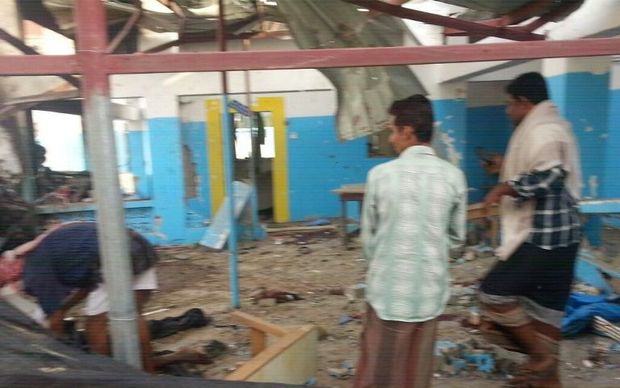 A hospital operated by MSF is examined after it was hit by an air strike. Photo: AFP

Another 19 people were injured in the attack in Abs, in Hajjah province, believed to have been carried out by the Saudi-led coalition which is backing Yemen's government in its fight against Houthi rebels.

The coalition has not yet commented.

Local people said the hit followed days of air raids in the area.

The first rescue workers to arrive at the scene had to move cautiously, fearing that the circling planes might attack again.

Two more patients died while they were being transferred to another hospital, it added.

The conflict in Yemen has left more than 6400 people dead, half of them civilians, and displaced 2.5 million others, according to the UN.

MSF said more than 4600 patients had been treated at the Abs hospital since MSF began supporting it in July 2015.

A spokesman for the United Nations said the organisation was aware of the latest reports from Yemen and was trying to gather some details.

Last year, one person was killed in coalition air strikes on an MSF-supported health centre in the neighbouring province of Saada and a mobile clinic in the southern province of Taiz were hit in air strikes, according to the charity.

A hospital in Saada was hit by a projectile this January, killing six people.

The attack in Abs comes less than 48 hours after MSF said a coalition air strike on a Koranic school in Saada's Haydan district had killed 10 children.

The home of a school headmaster in Razih district was also hit that day, killing his wife and four of their children, witnesses told the New York Times. A second air strike killed four of their relatives as people tried to rescue them, they said.

The coalition denied targeting a school in Haydan, instead saying that it had bombed a camp at which the Houthis were training child soldiers.