Large numbers of Yemenis have taken part in a demonstration in the capital Sanaa in support of Houthi rebels and their allies, who control the city. 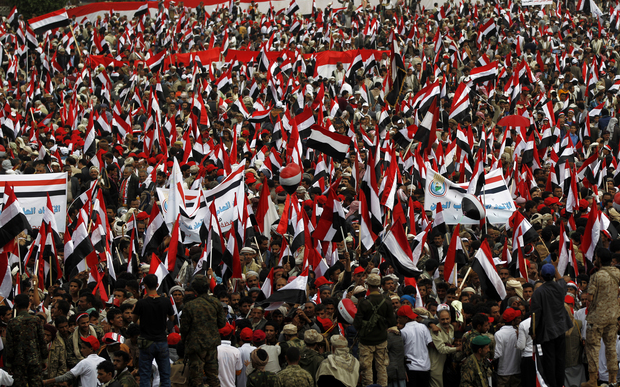 Yemenis waving the national flag during the protest. Photo: AFP

Demonstrators backed a new governing council announced by the rebels.

Shortly afterwards, bombs were reported to have been dropped nearby by planes of the Saudi-led coalition backing the internationally recognised government.

The Saudis have been repeatedly criticised over civilian deaths in air strikes in Yemen.

On Thursday the charity Medecins Sans Frontieres (MSF) said it was withdrawing staff from six hospitals in northern Yemen after a coalition air strike hit one of its buildings, killing 19 people.

Separately, the US military cut the number of its advisers directly supporting the Saudis' air war in Yemen from about 45 to five, US officials announced.

They said it was not related to growing international concern over civilian casualties.

In another development, Saudi officials said one person had been killed and six others injured in cross-border rocket fire from Yemen that hit the city of Najran. It was the third such attack in a week.

Sanaa-based political analyst Hisham al-Omeisy, who was at Saturday's rally, said it was attended by nearly 100,000 people.

"Suddenly the Saudi jets started circling on top of us, and as always, we thought they would just fly by, just trying to scare the crowd," he said, speaking to the BBC's Newshour programme.

"Suddenly they started bombing and the crowd started running. I basically bolted out of the area. People started screaming ... Because everybody's very well armed, they started shooting their AK-47s and their machine guns into the sky."

AP news agency said the presidential palace in the city and other areas had been hit in coalition airstrikes, leaving an unknown number of casualties.

The Saudi-led force has been carrying out air strikes in Yemen since March 2015 to try to oust the rebels and defend the internationally recognised government of President Abedrabbo Mansour Hadi.

The UN says more than 6500 people, mostly civilians, have been killed since then. It estimated more than 80 percent of the population needed humanitarian aid.

UN figures also suggested that forced displacement across Yemen was on the rise, affecting more than 2,000,000 people.