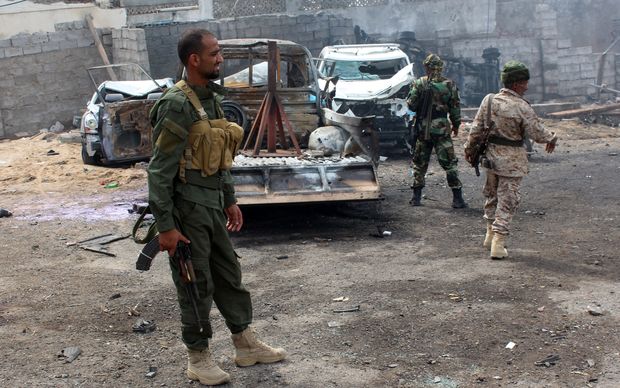 Yemeni loyalist forces gather at the scene of a suicide attack targeting the police chief in the base of the Saudi-backed government on April 28. Photo: AFP

They said hospitals in the city were also treating at least 25 people wounded in the attack.

A suicide bomber blew himself up in the southern Yemeni city of Mukalla on Sunday in an attack claimed by Islamic State.

A security source earlier said at least ten recruits who had been lined up at a police headquarters had been killed.

It was the second deadly blast to hit the city, which was a hub for al Qaeda before the group was pushed out in a military offensive last month.

In a message on its online news agency Amaq, Islamic State said the attacker was a "martrydom-seeker" who had detonated his explosive belt.

Al Qaeda militants took advantage of more than a year of war in Yemen to carve out a mini-state stretching across much of the southern coast but an attack by government troops backed by the United Arab Emirates reversed many of their gains.

Their militant rivals in Yemen's branch of Islamic State rose last year and have launched a series of suicide attacks on all parties to Yemen's tangled conflict.

Saudi Arabia, the UAE and other Arab countries intervened in Yemen's civil war in March last year in support of the internationally recognized government, which had been swept into exile by Yemen's Houthi movement, an ally of Iran.

The mostly Gulf Arab military coalition fear the Houthis are acting as proxies for Tehran - something the group denies - and their fight has split Yemen's army and enabled militant groups to carry out dozens of bombing and shootings.

Al Qaeda in the Arabian Peninsula (AQAP) and Islamic State viewed the Arab coalition as a pawn of the West and saw the Shi'ite Muslim Houthis as apostates deserving death.

The US military announced last week it had send troops to Yemen to aid in the fight against AQAP.

They would be its first presence in the country since the Houthi takeover, though its campaign of unmanned drone attacks on AQAP members continued unabated throughout the war.