The Saudi-led coalition bombing Houthi rebels in Yemen has said its attack on a funeral hall in the capital, Sanaa, was based on "bad information". 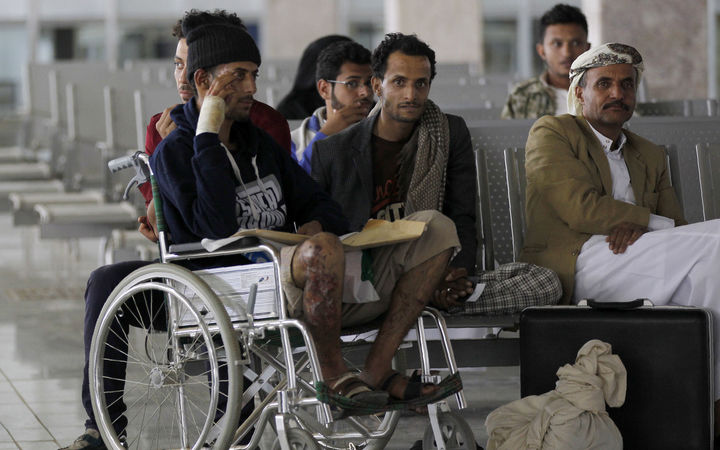 Yemeni men wounded in the Saudi-led coalition strike on a funeral last weekend wait for an Omani plane to evacuate them. Photo: AFP

At least 140 people - almost all civilians - were killed in the 8 October bombing. Heavily criticised internationally, it resulted in one of the single worst death tolls in the two-year conflict.

An inquiry has blamed "non-compliance with coalition rules of engagement" and "the issuing of incorrect information".

The 14-nation Saudi-led inquiry, carried out by the Joint Incidents Assessment Team, said coalition aircraft were wrongly told that the funeral hall was full of Houthi leaders.

It said "a party affiliated to the Yemeni presidency of the general chief of staff" was to blame. 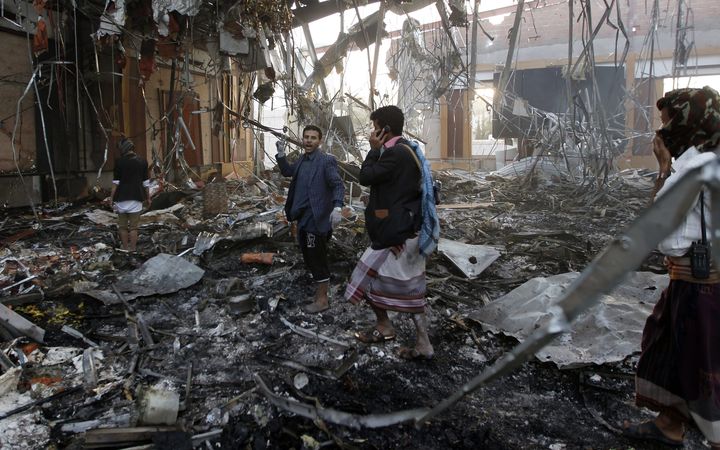 Rescue workers search for victims amid the rubble after the Saudi-led coalition air strike on a funeral hall in the Yemeni capital Sanaa. Photo: AFP

The inquiry also apportioned blame to the Air Operation Center in Yemen for directing aircraft onto the target without obtaining approval from the coalition's command.

The investigation called for families of the victims to be compensated. An estimated 600 people were injured in the bombing.

"Coalition forces must immediately review their rules of engagement and update their procedures to ensure adherence in future," the inquiry team said.

The conflict in Yemen pits forces loyal to the internationally recognised government of President Abdrabbuh Mansour Hadi against Houthi rebels.

The coalition led by Saudi Arabia accuses Iran of backing the rebels and supports the president.

The United Nations says more than 6000 people have been killed in the conflict, many of them civilians.

The coalition, which includes Saudi Arabia's Gulf Arab allies, has logistical backing from the United States but the White House condemned the bombing and said it was reviewing its assistance.

Adding to the condemnation, Human Rights Watch said the air strike was "an apparent war crime" and "unlawfully disproportionate".

The UK, a major seller of arms to Saudi Arabia, is to present a draft resolution to the UN Security Council next week calling for a ceasefire in Yemen.

Two Americans held hostage in Yemen have been freed and flown to neighbouring Oman, after Omani officials reportedly mediated their release.

Oman state television has broadcast footage of the two Americans disembarking from a plane belonging to the Royal Air Force of Oman.

Yemenis wounded in the country's civil war were also flown over for treatment in Oman aboard the same plane, it reported.

A foreign ministry official told the broadcaster Oman had worked with Yemeni authorities in Sanaa to secure the Americans' release.