Democrat Tim Kaine tried to make the only vice-presidential debate all about Donald Trump on Tuesday, calling him a danger to US national security. 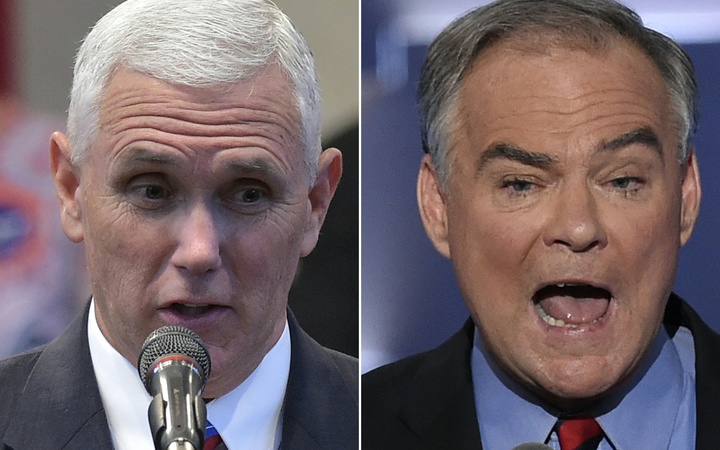 Mr Kaine also blasted the Republican presidential nominee as someone who denigrated women and minorities and appeared to pay little in federal taxes.

The debate between Mr Kaine, the number two to Democratic presidential nominee Hillary Clinton, and his Republican rival Mike Pence was the only such encounter between the vice-presidential contenders, and the two spent most of their time attacking each other's running mates.

Their bickering was so intense that they frequently talked over each other as Mr Kaine, a US senator from Virginia, tried to frighten voters away from Mr Trump, while Mr Pence, the Indiana governor, attempted to portray Mrs Clinton as untrustworthy for the White House and a failure as President Barack Obama's first-term secretary of state from 2009 to 2013.

Mr Kaine drew Mr Pence's ire by hearkening back to a remark from former Republican president Ronald Reagan that some fool or maniac with a nuclear weapon could trigger a catastrophic event.

"And I think that's who Governor Pence's running mate is," Mr Kaine said.

Mr Pence shot back: "Senator, senator, that was even beneath you and Hillary Clinton and that's pretty low."

Mr Kaine, in a line that was clearly rehearsed, repeatedly sought to persuade Mr Pence to defend Mr Trump's positions. He reminded the millions watching on television that Mr Trump was enmeshed in a public feud with a former beauty queen last week, and he pointed out that Mr Trump had praised Russian President Vladimir Putin. 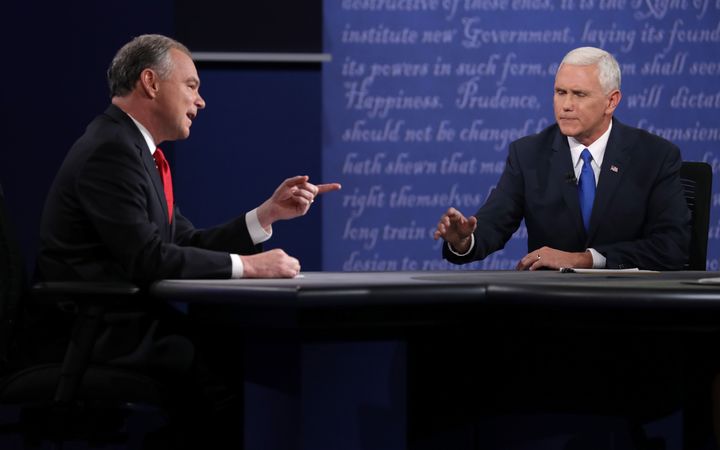 Democrat Tim Kaine, left, argues with Republican Mike Pence at the only vice-presidential debate scheduled for this election. Photo: AFP

But Mr Kaine's overarching objective was to hammer home that Mr Trump has refused to release his tax records, unlike all other presidential nominees in modern history.

The New York Times reported last weekend that Mr Trump had taken a $916 million tax loss in 1995 and may have avoided paying federal taxes for 18 years because of it.

Mr Pence, who has a low-key style compared to Mr Trump's signature bombast, said Mr Trump as a New York real estate developer had created thousands of jobs and had used US tax laws as they were designed to be used.

"Why won't he release his taxes?" Mr Kaine fired back.

The two candidates interrupted each other so much in a bid to score points that the debate moderator, CBS News' Elaine Quijano, intervened at one point.

"The people at home can't understand either one of you when you speak over each other," she said.

The debate came at a crucial time for both campaigns. Mrs Clinton is seeking to take advantage of the report last week on Mr Trump's taxes to build on her lead in national opinion polls.

Mr Trump, meanwhile, needs to rebound from a rocky performance in his first debate with Mrs Clinton last week with their second encounter coming up on Sunday in St. Louis.

While Mr Kaine accused Mr Trump at length of mistaking "leadership for dictatorship" by praising Mr Putin as a strong leader, he gave a much more abrupt answer when asked what went wrong with the failed US reset of relations with Russia under Mr Obama and Mrs Clinton.

Seated beside each other, the two vice-presidential candidates launched broadsides against Mr Trump and Mrs Clinton soon after taking their places at the debate table.

"Donald Trump always puts himself first," Mr Kaine said, pointing out that when Mr Trump began his presidential campaign last year he called Mexicans "rapists and criminals" and had also voiced the "outrageous lie" that Mr Obama was not born in the United States.

Mr Pence replied that Mr Kaine and Mr Clinton "would know a lot about an insult-driven campaign" and then accused Mrs Clinton of bungling foreign policy, with large sections of the Middle East "literally spinning out of control."

Earlier, the Republican Party jumped the gun and declared its candidate the "clear winner" of the debate in a post on its official gop.com website.

In the statement on the site 90 minutes before the debate started, it said "the consensus was clear" that Mr Pence won.

It was soon removed from the website, but not before screengrabs of the statement were widely shared on social media.

Congratulations to Mike Pence on already being declared the winner by the RNC! pic.twitter.com/df0QcXb91Y

The RNC is like the old Soviet joke: Somebody broke into the Kremlin vault and stole the results of next month's elections. https://t.co/MtGWCQCiyX

Earlier, Vice-President Joe Biden offered some advice for candidates while speaking to reporters.

"Think about whether you made the right decision," he said. "Because it could be a long day in that office over there," he explained while pointing to the White House, "if you don't agree with the president".