Democrat Hillary Clinton and Republican Donald Trump locked horns over the economy, assailed each other's foreign policy and interrupted each other repeatedly in heated exchanges in the first US presidential candidate debate this afternoon. 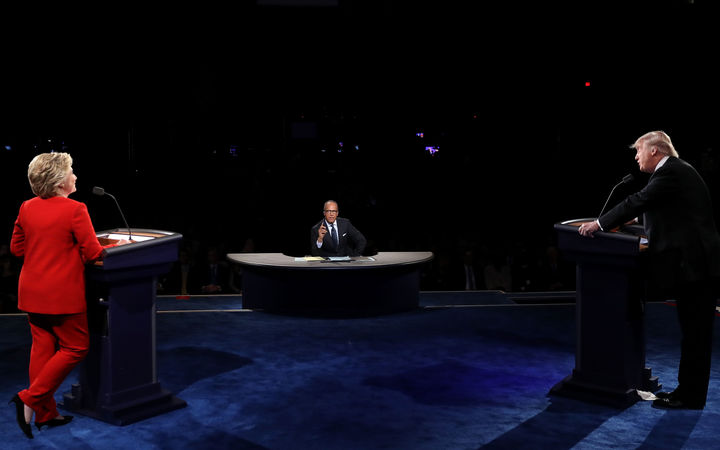 Mrs Clinton and Mr Trump face off in the first US presidential debate at Hofstra University in Hempstead, New York. Photo: AFP

And the polls have also shown the two candidates are in a tight race, with the latest Reuters/Ipsos polling showing Mrs Clinton ahead by four percentage points, with 41 percent of likely voters.

After greeting each other with a handshake and a smile, the two opponents went on the attack, with Mrs Clinton calling the New York businessman's tax policies "trumped-up trickle-down" economics and Mr Trump accusing the former Secretary of State of being "all talk, no action".

Towards the end of the debate, Mr Trump said Mrs Clinton did not have the endurance to be president.

Citing her own public record, Mrs Clinton retorted: "As soon as he travels to 112 countries and negotiates a peace deal, a ceasefire, a release of dissidents ... or even spends 11 hours testifying in front of a congressional committee, he can talk to me about stamina.

"Now you try to switch from looks to stamina but this is a man who has called women 'pigs' 'slobs' and 'dogs' ... one who has said pregnancy is an inconvenience to employers, who has said women don't deserve equal pay unless they do as good a job as men.

"One of the worst things he said was about a woman in a beauty contest ... he called this woman 'Miss Piggy' ... he called her 'Miss Housekeeping' because she was Latina.

"Donald, she has a name," Mrs Clinton said.

Each accused the other of distortions and falsehoods and urged viewers to check their websites for the facts. She called him Donald, and he called her Secretary Clinton.

"I have a feeling I'm going to be blamed for everything," said Mrs Clinton, the first woman to win the presidential nomination of a major US political party.

"Why not?" Mr Trump retorted.

Mr Trump said he had better judgement and a better temperament than Mrs Clinton.

"A man who can be provoked by a tweet should not have his fingers anywhere near the nuclear codes," she said.

Mrs Clinton said the plan Mr Trump had put forward was "trickle-down economics all over again".

"And in fact it would be the most extreme version, the biggest tax cuts for the top percents of the people in this country, that we've ever had.

"I call it trumped-up trickle-down, because that's exactly what it would be," she said.

Mr Trump criticised Mrs Clinton for her trade policies and called the North Atlantic Free Trade Agreement, signed by her ex-president husband Bill Clinton, one of the worst things to happen to American manufacturing.

He also said Mrs Clinton would vote for the Trans-Pacific Partnership, despite opposing it as a candidate.

"You were totally in favour of it, then you heard what I was saying, how bad it is, and you said, 'Well, I can't win that debate,' but you know that if you did win, you would approve that," he said.

"Well Donald, I know you live in your own reality, but that is not the facts," she said.

Mrs Clinton criticised Mr Trump for not releasing his tax returns and said that decision raised questions about whether he was as rich and charitable as he has claimed to be.

Mrs Clinton has faced criticism for the use of a private server to house her emails when she was Secretary of State.

She said she made a mistake over her emails and, if she had the chance, she would do it differently.

However, Mr Trump said it wasn't a mistake, it was deliberate.

Mrs Clinton said the few years of tax returns released by Mr Trump showed that, despite his wealth, he paid no federal income tax.

"I have a tremendous income," he said at one point, adding that it was about time that someone running the country knew something about money.

On race and being a 'birther'

Mrs Clinton accused Mr Trump of having a long history of racist behaviour.

She said the US had to restore trust between African-Americans and the police, and the nation had to tackle the plague of gun violence.

Mr Trump said Mrs Clinton did not want to use two words: "law and order".

He said the country's inner cities were like war-torn countries and people on terrorist watchlists should not be allowed to own guns.

Mrs Clinton pointed out that violent crime had halved since the 1990s, and property crime was down too.

Questioned about his roll in the so-called birther movement - based on widely-reported lies that President Barack Obama was born in Kenya - Mr Trump repeated the false accusation he made last week that Mrs Clinton's staff initiated the rumours.

"He [Trump] has really started his political activity based on this racist lie that our first black president was not an American citizen. There was absolutely no evidence for it. But he persisted. He persisted year after year," Mrs Clinton said.

Mr Trump said: "Nobody was pressing it, nobody was caring much about it ... I was the one that got him to produce the birth certificate and I think I did a good job."