The US is suspending talks with Russia over the Syrian crisis.

Washington said Moscow had not lived up to the terms of last month's ceasefire agreement, which has since collapsed.

"This is not a decision that was taken lightly," US State Department spokesman John Kirby said.

Russia said it regretted the decision, accusing the US of trying to shift the blame over the failed deal.

United Nations Syria envoy Staffan de Mistura also said it "deeply regrets" the US suspension of talks, but said the world body would "continue to push energetically for a political solution" to end the war.

"The UN will never abandon the Syrian people to a destiny of endless violent conflict," de Mistura's office said in a statement. 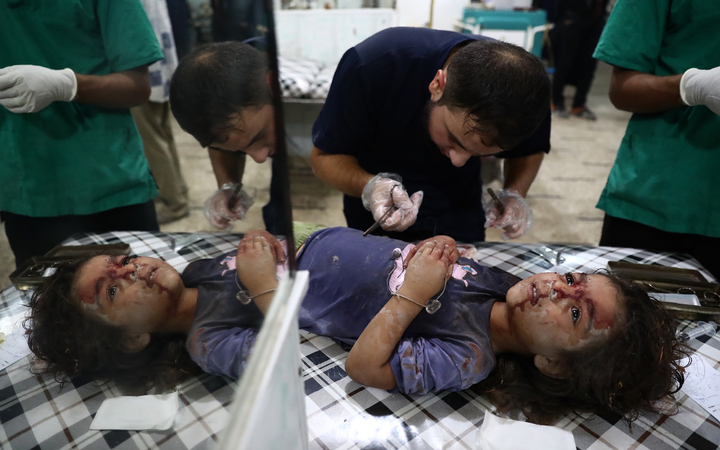 A child receives medical treatment after an air strike in Douma on the outskirts of Damascus, Syria. Photo: AFP

The US announcement came as the Syrian government, supported by Iranian-backed militias and Russian air power, pounded the rebel-held area of Aleppo, bombing one of the city's main hospitals and badly damaging water supplies.

The confirmation that the US-Russian talks on Syria had collapsed suggested there was little hope, if any, of a diplomatic solution to end the 5-1/2-year-old civil war emerging anytime soon.

It could also trigger deeper US consideration of military options such as providing more sophisticated arms, logistical support, and training to Syrian rebel groups, either directly or via Gulf Arab states or Turkey.

However, US President Barack Obama has been loath to get the United States more deeply involved in a third war in the Islamic world and US officials have said he is unlikely to do so with less than four months left in office. 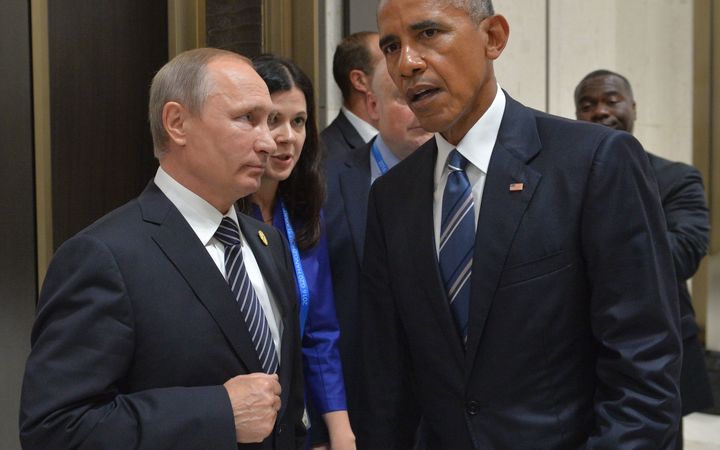 US President Barack Obama, right, has been loath to get the more involved in Syria, while Russian President Vladimir Putin says the US has taken "unfriendly actions" against his country. Photo: AFP

US Secretary of State John Kerry threatened last week to end the talks after a ceasefire he and his Russian counterpart, Sergei Lavrov, brokered collapsed last month when warplanes believed to belong to Russia bombed a UN aid convoy.

In the latest US statement, John Kirby said the US would continue to communicate with Russian military to avoid so-called deconfliction - to avoid accidental military interactions - over Syria.

But he said the United States would withdraw all personnel it had dispatched to prepare for military co-operation with Russia under the latest ceasefire agreement.

"Unfortunately, Russia failed to live up to its own commitments ... and was also either unwilling or unable to ensure Syrian regime adherence to the arrangements to which Moscow agreed," Mr Kirby said.

Meanwhile, Russia has suspended an agreement with the US on the disposal of surplus weapons-grade plutonium, the latest sign of worsening bilateral relations.

In a decree, President Vladimir Putin accused the US of creating "a threat to strategic stability, as a result of unfriendly actions" towards Russia.

Moscow also set pre-conditions for the US for the deal to be resumed.

Under the 2000 deal, each side is supposed to get rid of 34 tonnes of plutonium by burning it in reactors.

It is part of cuts to nuclear forces.

The US state department said the combined 68 tonnes of plutonium was "enough material for approximately 17,000 nuclear weapons". Both sides had reconfirmed the deal in 2010.

In Monday's decree, Mr Putin said Russia had to take "urgent measures to defend the security of the Russian Federation".

In April, Mr Putin said the US was failing to fulfil its obligations to destroy plutonium. Instead, he argued, the US reprocessing method allowed plutonium to be extracted and used again in nuclear weapons.

Both sides had agreed to build special facilities for disposing of the surplus plutonium.

"We fulfilled our duties, we built that enterprise. But our American partners did not," Mr Putin said.

The US rejected that claim, insisting that its disposal method did not violate the agreement.

Also on Monday, President Putin submitted a bill, in Russian, to parliament setting a series of pre-conditions for the US for the agreement to be resumed, including reduction of US military infrastructure and troops in countries that joined Nato after 1 September 2000 and lifting of all US sanctions against Russia and compensation for the damage they have caused.

The US - as well as the European Union - imposed a series of sanctions against Russia following the annexation by Moscow of Ukraine's southern Crimea peninsula in 2014, and Russia's support for separatists in eastern Ukraine.

Tensions between Washington and Moscow rose further last month over Russia's bombing campaign in Syria, which some have described as a "war crime".

Russian planes are helping Syrian government forces to hit rebel groups, some of which are supported by the US and its Gulf Arab allies.