Jamaicans are bracing for the arrival of Hurricane Matthew, which is bringing winds of up to 220 kilometres per hour - enough to destroy homes.

Matthew, the strongest hurricane in the Atlantic Ocean since Felix in 2007, was forecast to make landfall as a major storm on Monday (local time) on Jamaica's southern coast - home to the country's capital, Kingston, and its only oil refinery. 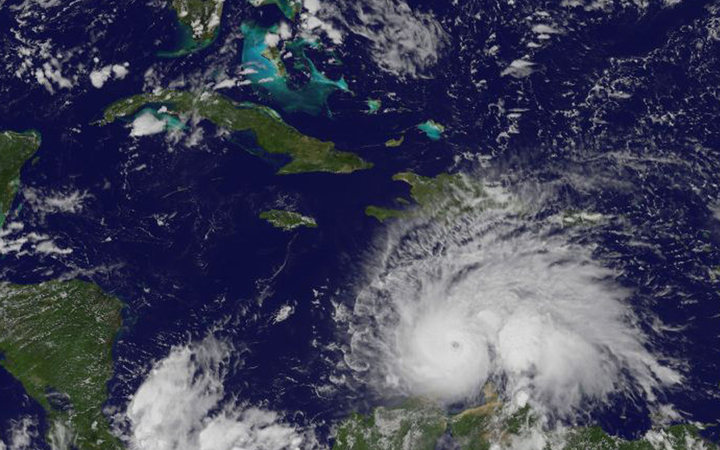 It could also affect tourist destinations such as Montego Bay in the north.

The US National Hurricane Center had earlier ranked it as a Category 5 hurricane but has now downgraded it to Category 4.

The Jamaican capital got a preview of what might be in store when the road to the airport temporarily flooded due to unusually high tides.

Rain fell and authorities told fishermen to moor in safe harbor until the storm had passed.

"We're boarding up the windows and we're moving things in vulnerable areas to safer areas," said Mary Lowe, owner of Wilks Bay resort near Port Antonio on the northeast coast.

Disaster coordinators, police and troops were on high alert and shelters were being opened across the island, a spokesman for the Prime Minister said.

Forecasters described Matthew's movements as erratic on Saturday, but said it would approach Jamaica and southwestern Haiti overnight. Haitian officials said preparation efforts were focused in the south, which is prone to devastating flooding.

It is due to reach Cuba on Tuesday.

"We have to work intensely," party central committee spokesperson Lazaro Exposito Canto said, adding in the Granma newspaper that volunteers would go from house to house to warn of the storm.

Jamaica was hard hit by Hurricane Gilbert in 1988.

Matthew could be the most powerful storm to cross the island since records began, meteorologist Eric Holthaus said on Twitter.

Many Kingstonians stocked up on water and food on Friday.

Tenaj Lewis, 41, a doctor who was stokcing up on groceries, said Jamaica was much better prepared for hurricanes than when Gilbert struck.

"The country literally shut down for months," she said.

Since then, hurricanes have brought a few days of power outages but have not been nearly as destructive and many Jamaicans were unflustered.