A manhunt is under way for a shooter who killed five people at a shopping centre in Washington state on Friday.

The shooting took place at Cascade Mall in Burlington, near Seattle. 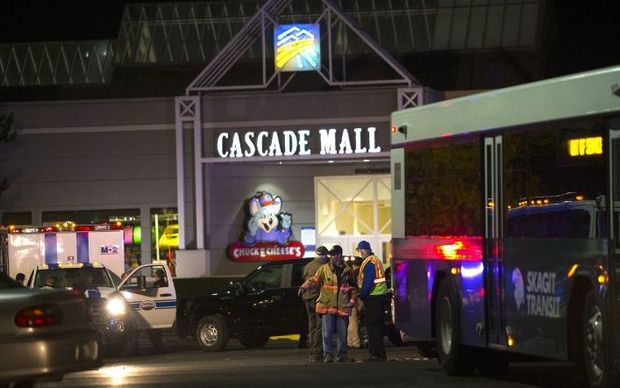 The shooter was still on the run and police have released a photo of the suspect.

He was described as a male in his late teens or early 20s, wearing a black shirt and shorts.

The shooter's motive was unclear, but there was no evidence that the shooting was linked to terrorism, the FBI said.

Police confirmed four women were killed inside the mall. A man later died in hospital. They have not been identified.

Cascade Mall and nearby shops were sealed off and a search for the shooter was under way.

Speaking at a news conference, Lieutenant Chris Cammock said security footage showed the suspect entered the mall without a weapon.

Ten minutes later the video shows the suspect entering a Macy's department store in the mall with a rifle.

Police arrived after the gunman got away and do not know which direction he took. They have asked community members to contact local law enforcement with any tips.

Burlington Mayor Steve Sexton said: "The city of Burlington has probably changed forever but I don't think our way of life needs to change."

He urged the community to come together in the midst of the crisis and support law enforcement in their efforts to track down the suspect. 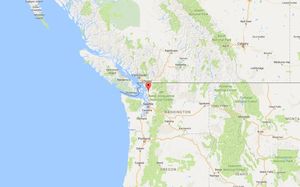 Washington State Patrol spokesman Mark Francis said on Twitter that survivors were being taken to a nearby church.

A local hospital told a CBS affiliate that it had received one casualty from the shooting. The station reported that a nearby high school football game was evacuated as a precaution.

Rescue workers were entering the mall to attend to the injured, Francis said in a Twitter post.

"Tragedy has struck in Washington tonight. Our hearts are in Burlington," Governor Jay Inslee said on Twitter.

The shooting comes less than a week after a man stabbed nine people at a mall in central Minnesota before being shot dead. The FBI is investigating that attack as a potential act of terrorism.

NBC News reported that Washington State Patrol have said that there is no indication of terrorism in the shooting in Burlington.

Burlington is about 105km north of Seattle.